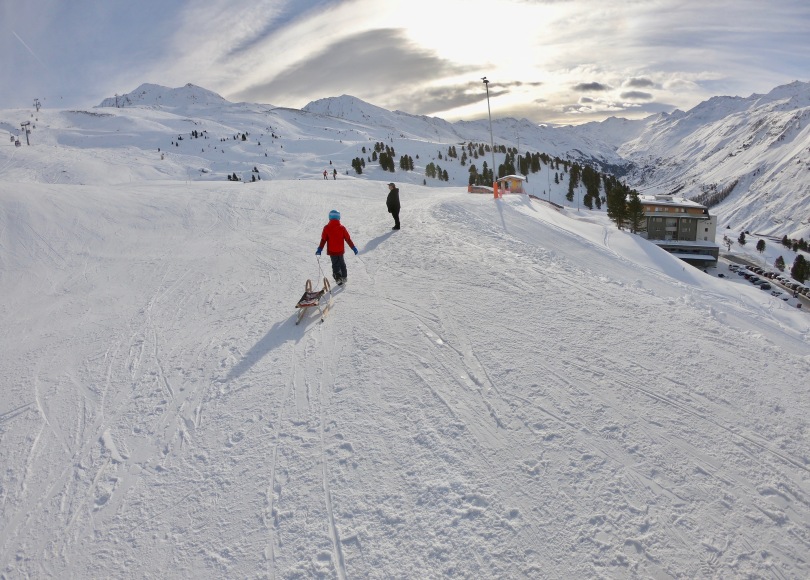 6th Day in the Alps…

Hochgurgl is one of the two villages that make up the Obergurgl-Hochgurgl ski resort.  It is only a few minutes away from Obergurgl where we based ourselves during our visit to the Austrian Alps.

Hochgurgl sits at an elevation of 2150m and its slopes are up to an altitude of 3080m above sea level (that’s one of the highest in the region!).  Apart from skiing, it is also known for Top Mountain Star, a futuristic-looking restaurant on one of its peaks at 3030m.

But we visited Hochgurl twice, not for the slopes or its famed apre-ski but for the promise of a thrilling toboggan run. We’ve done it one summer in Switzerland but this was going to be our first on the snow.

Hochgurgl has a 3-km-long natural toboggan run that starts from the top of Hochgurgl Bahn lift I all the way down to the base of the mountain.

The first time we did it was in the evening.  The run seemed endless but it was the coolest thing ever.  There were frequent unexpected turns, some of which I found unnerving but most were ‘totally cool’ according to our kids.  We initially planned on visiting either Solden or the Aqua Dome the following day, but we unanimously agreed to just head back to Hochgurgl and do tobogganing again.

Tobogganing is not without risks but it was one of the most exhilarating things that we’ve ever done in the snow.  My hubby and I allowed our kids to do it a couple of times without us.  Quite daring (for me and my hubby to agree to this) but it was all worth it after seeing the proud, brave smiles of our kids as they reached the base.

Here’s a video of our toboggan run.  Sit tight guys, you’re in for a thrilling ride!

At the end of our toboggan runs on both days, we stopped by Downhill Grill for food.  It was conveniently located at the foot of the run.  They have good food I must say, we had steak and burgers and I especially loved their apple strudel.