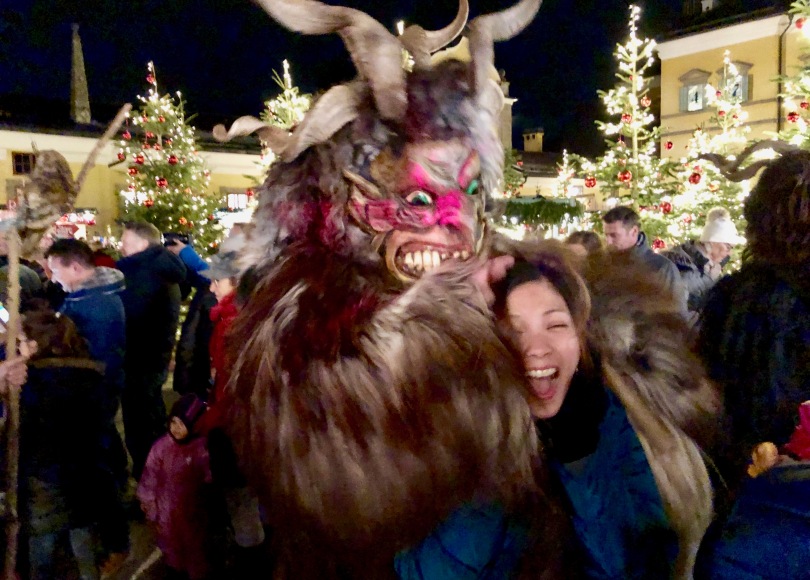 The moment we were back in Salzburg from our road trip in the Salzkammergut region, we excitedly headed to Hellbrunn Palace.  Hellbrunn, a summer and recreation palace for the nobility from the 1600s, was one of the venues in Austria for the Krampus run last year.  I planned our itinerary in such a way that we would be able to join the run either in Munich or in Salzburg.  You see, this is an ancient Bavarian tradition during advent, and so we were determined not to miss it.

The krampus is a half-goat, half-demon beast who is said to be Santa’s scary and horrible-looking counterpart.  While Santa gives gifts to the nice kids, the krampus punishes the naughty ones.  The krampus run is believed to have started in the Alpine regions in the 16th century, and now the parades are held in many central European countries.

We initially planned on catching the run at Residenzplatz at the Old Town, but our hotel concierge advised us that the one in Hellbrunn is the highly anticipated run in Salzburg and so there we went.

The parade was joined by over a hundred krampus and lasted for more than 30 minutes.  It was loud, crazy, scary, and fun at the same time. The pictures below would say it all.  BUT, our little Joaquin, who was at first enjoying the festivities, had the fright of his life.  One krampus grabbed and lifted him up, he went screaming for “Help!!!!” Oh poor child.  He had nightmares.  He still didn’t want to see the pictures or videos from the run, he didn’t even want to talk about it.

Here’s a short video of that night.  Towards the end, you’ll hear poor Joaquin screaming. 🙂

Waiting for the run

The palace ground transforms into a charming Christmas market during advent.

It looked like a fairy-tale scene in the palace.

We explored the beautifully decorated palace grounds before the run.

I remember that it felt nice walking here, through the lighted trees in the palace park.

Ah this bad bad krampus startled me from behind 🙂 Another one messed up my hair!

This is Joaquin’s selfie with the krampus that gave him his Christmas nightmare. 🙂

They usually walk with a wooden stick or chains to scare the kids.  They wear bells too, I suppose to make their presence known (?)

After the run, we came back to our hotel and had a late dinner at Pitter Keller. Be warned, the Nockerl dessert that they say is good for two, is actually good for 5! 🙂

Tips from our family:

Here are the other posts on our Munich and Austrian holiday: