That’s the 1st verse of the Christmas carol that is known to most of us.  We would all agree that it has beautiful lyrics and a melody that puts us in a state of comfort; hugs us like a lullaby.  This very song was put together by two friends who wanted to bring a message of hope and peace during a time of hardship and anxiety.

…It all started two hundred years ago, in the smaller towns north of Salzburg, the people were faced with poverty, natural catastrophes and the bitter effects of wars as Europe was in a crisis at that time (Napoleonic Wars, etc).  Oberndorf, one of those towns, was also suffering from territorial changes as it just separated from its wealthy twin town, Laufen, leaving Oberndorf with almost nothing, not a school nor a cemetery.  The people of Oberndorf were in despair.

On Christmas Eve of 1818, Josef Mohr, an assistant priest at Oberndorf had an idea.  He wanted to offer a new song, one that he hoped would bring the people of Oberndorf some comfort.  He pulled out the ‘Stille Nacht‘ (‘Silent Night’ in English) poem that he wrote two years earlier, walked a few kilometres to a nearby town, Arnsdorf, and brought the lyrics to his friend, Franz Xaver Gruber, a teacher at Arnsdorf and an organist at a church in Oberndorf.  Gruber created the perfect melody for the poem. And on the very same day of December 24, 1818, in Oberndorf, on the steps of St Nikola Church, the carol was first heard… 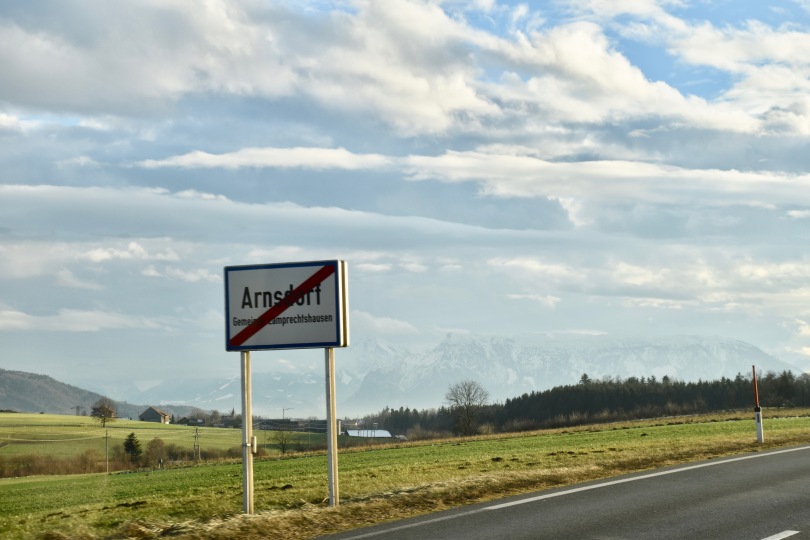 Following the trail of ‘Silent Night’, our family and another family from Australia boarded the yellow van of Bob’s Special Tours.  We were travelling to the quiet, little village of Oberndorf.  It was five days before Christmas; our cool, cowboy hat-wearing guide was playing Christmas carols in the van in between his commentaries.  He had a solemn face and he spoke just enough during the tour which was probably good because who’d really want an exceedingly chatty guide on a supposedly silent night. 🙂

Our first stop was Arnsdorf,  a small town less than 25 kilometres north of Salzburg.  It was here that Gruber once lived.  At the Stille Nacht Platz stood the Silent Night Museum of Arnsdorf.   There were a few interesting items in the small museum but we still deemed special.  After all, it was originally the school where Gruber taught. It was also where he and his family lived from 1807 to 1829.

We were warmly greeted by museum care-taker who enthusiastically shared with us stories about Gruber and Mohr.  We also watched a short video about the lives of the two friends and the people of Oberndorf.

Our next and final stop was Oberndorf, a mere 4 kilometres away from Arnsdorf.  The village was quiet despite the media setting up their equipment as the town prepared for the most anticipated 200th-year celebration of the town’s beloved song.

In the heart of Oberndorf, at the Stille Nacht Platz, was the Stille Nacht Kappelle (or Silent Night Chapel in English).  It was built to replace the original St Nikola Church which stood on the same spot 200 years ago.  The new chapel was small with just 2 windows and 3 rows of short pews.  It was decorated simply with two short pine Christmas trees and a couple of wreaths.  Images of Mohr and Gruber were depicted on the small stained glass windows.

A Song of Hope and Peace

Ninety-six years later, on December 24, 1914, barely a few months after World War I has begun, the song was heard on the freezing and muddy trenches of Flanders (Battle of Flanders in Belgium region).  There was a temporary truce, silence.  The soldiers on both sides – Germans and British, were caught shaking hands and exchanging small gifts on Christmas morning – a poignant moment, a Christmas miracle.

On Christmas of 1941, during the height of World War II, allies Franklin Roosevelt and Winston Churchill were heard in the White House, singing the same song that echoed from the trenches from the war before.

Up to this day, children and adults continue to sing this song.  For us, it now also has a special meaning…

Christmas Market and Sunset Where the River Bends

After lighting a candle at the chapel and shopping at the new Silent Night Museum of Oberndorf (which we no longer explored since we have already seen most of Mohr’s items in Salzburg Museum anyway), we headed to the small Christmas market located just a few steps from the chapel.  The boys had their usual Glühwein and chocolate drink by the comforting warmth of the fire, while I went around the stalls for some souvenirs. 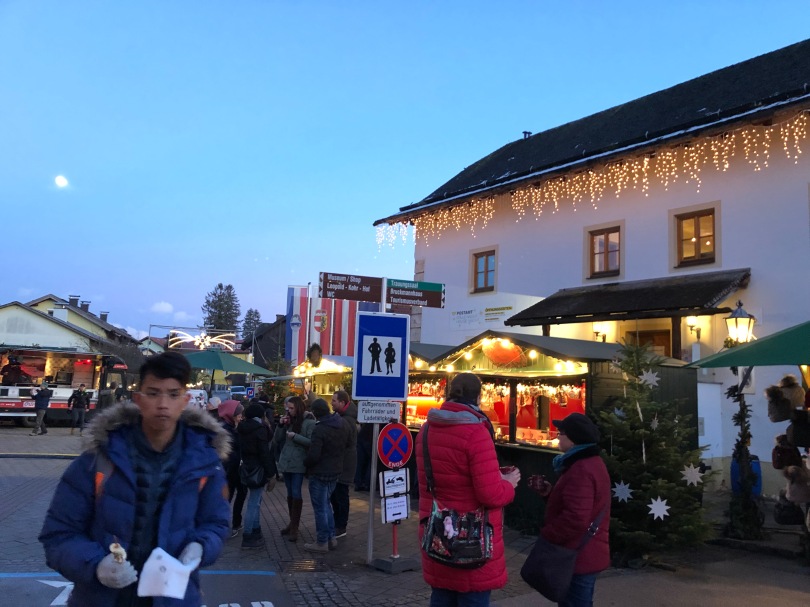 But the day has not ended, my favourite part of the tour has yet to come…

Meanwhile, I leave you with a video of a short tour inside the chapel. -xoxo-

Here are the other blogs on our Bavaria and Austria Holiday: