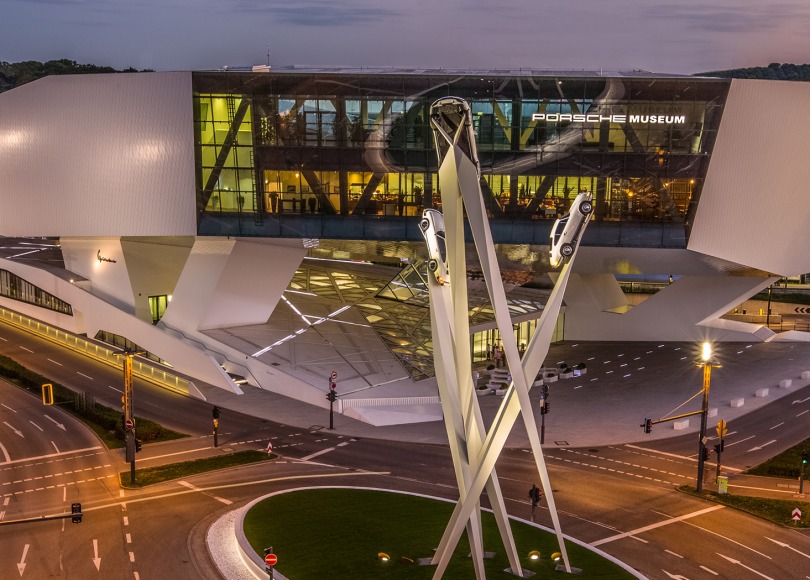 Hi! I’m Benjamin! I got roped back into helping my mom write her blog again by my younger bro, Joaquin, who wrote the previous entry (on the Mercedes Museum). He demanded that I take a leaf out of his book and write this one because I “looked super free during my summer break”, which is totally untrue because IM 17 AND I GRADUATE FROM HIGH SCHOOL THIS YEAR DUDE I HAVE STUDYING TO DO (@Joaquin when he reads this).

Nevertheless, I’m back and writing on cars once more (I wrote the Petersen entry on this blog back in 2016). Anyway, let’s jump right into it! I hope you enjoy and maybe even learn a thing or two about one of the world’s most iconic car manufacturers.

Pictured below: the Porsche 356, the first road car independently designed and produced by the brand, in 1948. More on it later! 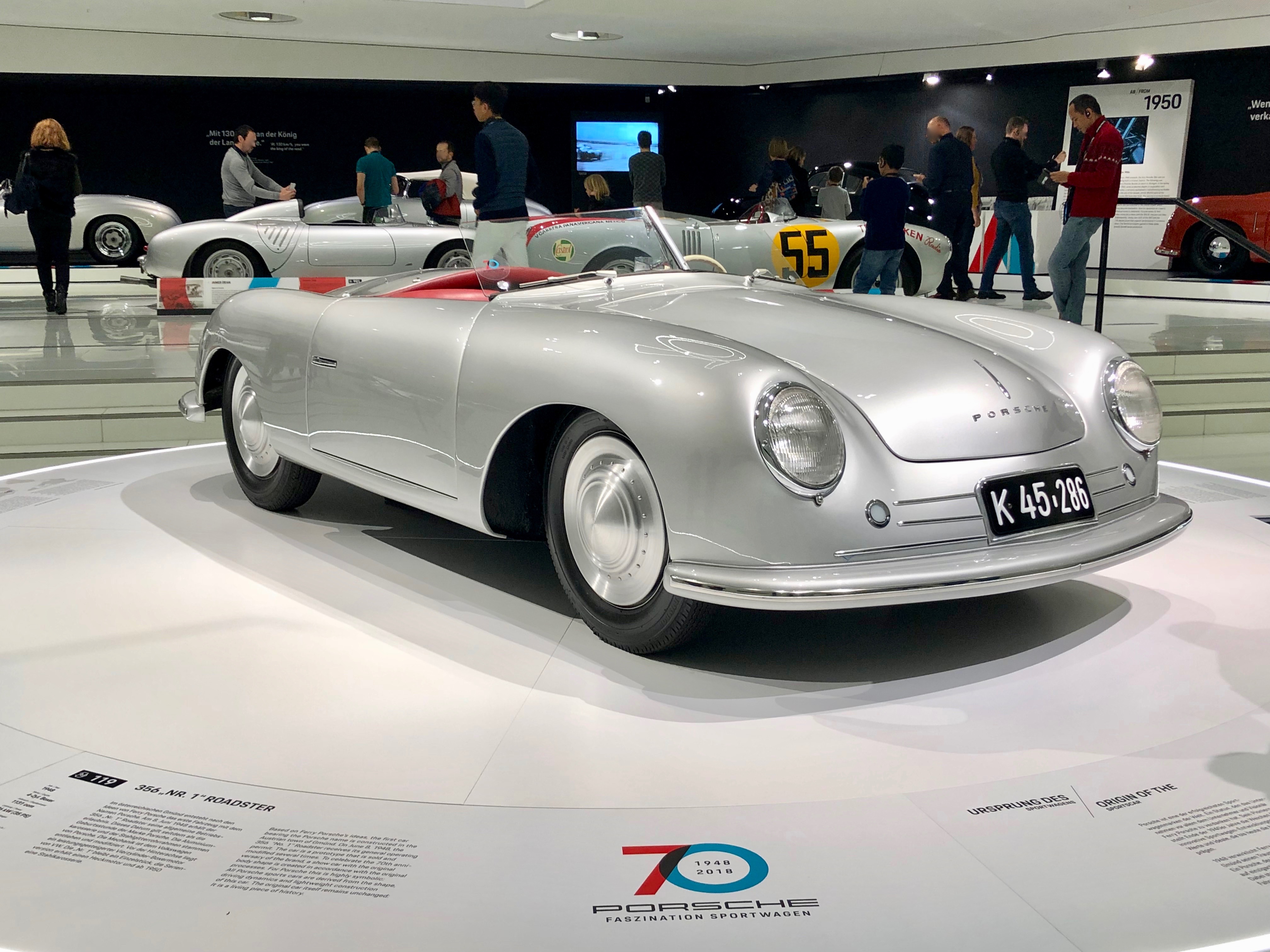 Right after exploring the Mercedes museum, we took a quick train ride to the other side of town, where we were greeted by the fanciest barbecue sticks we had ever seen. 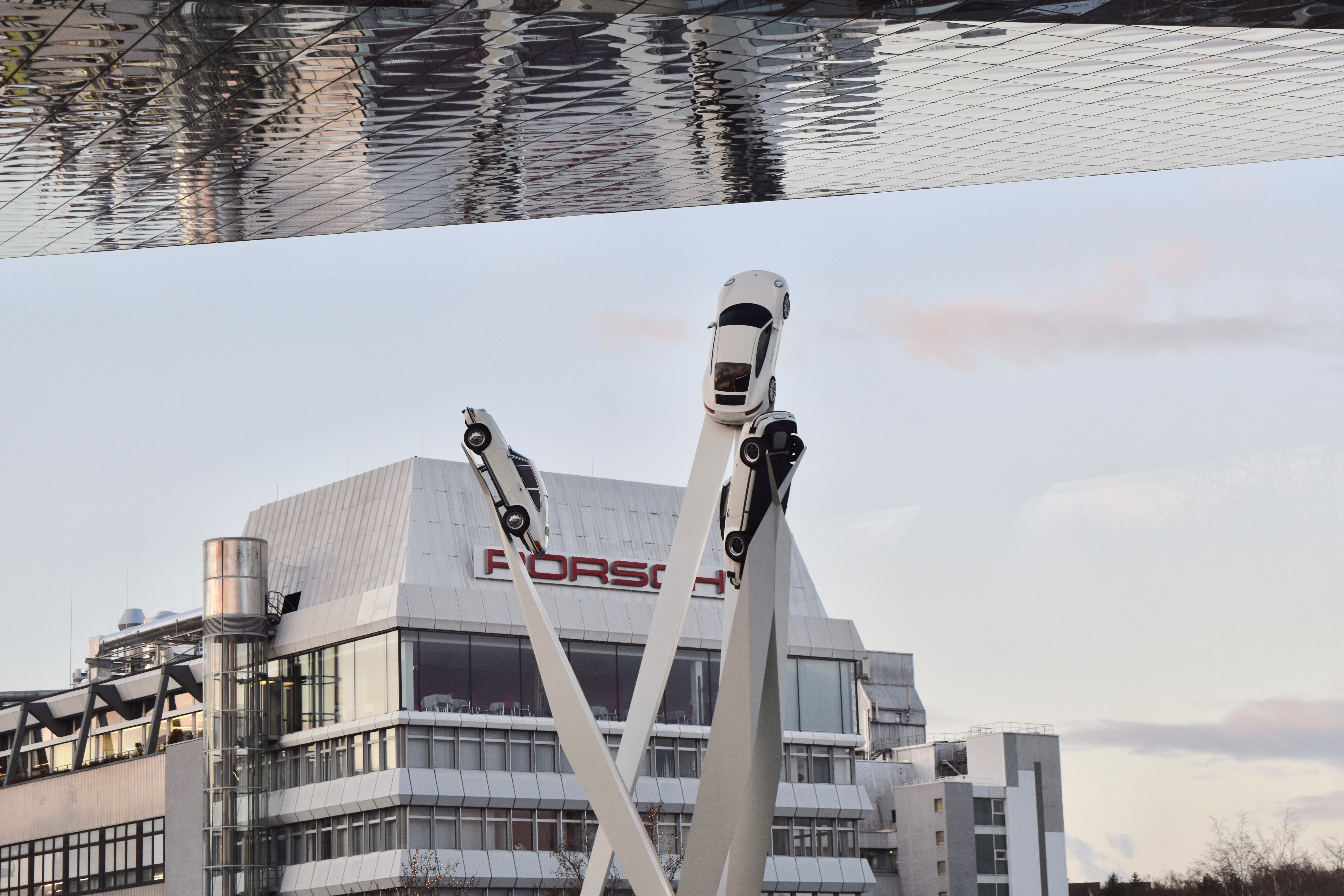 Notice the massive Porsche dealership in the background of that photo? It’s the largest one I’ve ever seen, and just happens to be one of the biggest in the world!

Right off the bat, we entered the museum and were greeted by a plethora of automobiles. This museum definitely wasn’t nearly as big as that of Mercedes, but its compact elegance and sleek, pristine interior perfectly reflected the overall vibe of the brand itself. 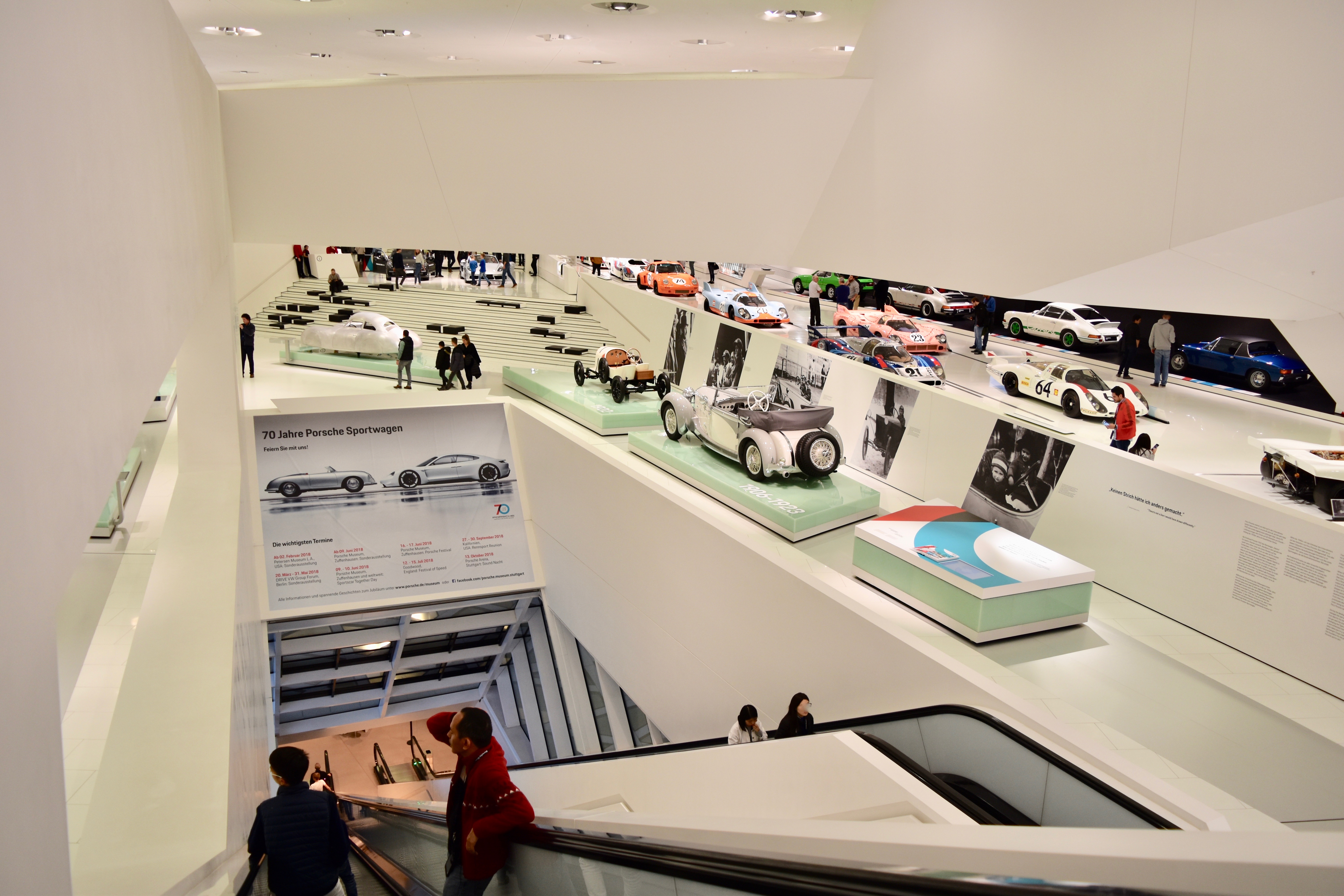 After having our tickets scanned and being given cool audio devices to help us interpret the exhibits, we began to work our way through them. One of the first things we encountered was a (not so empty) trophy case, with cups and awards dating back to the 70s. 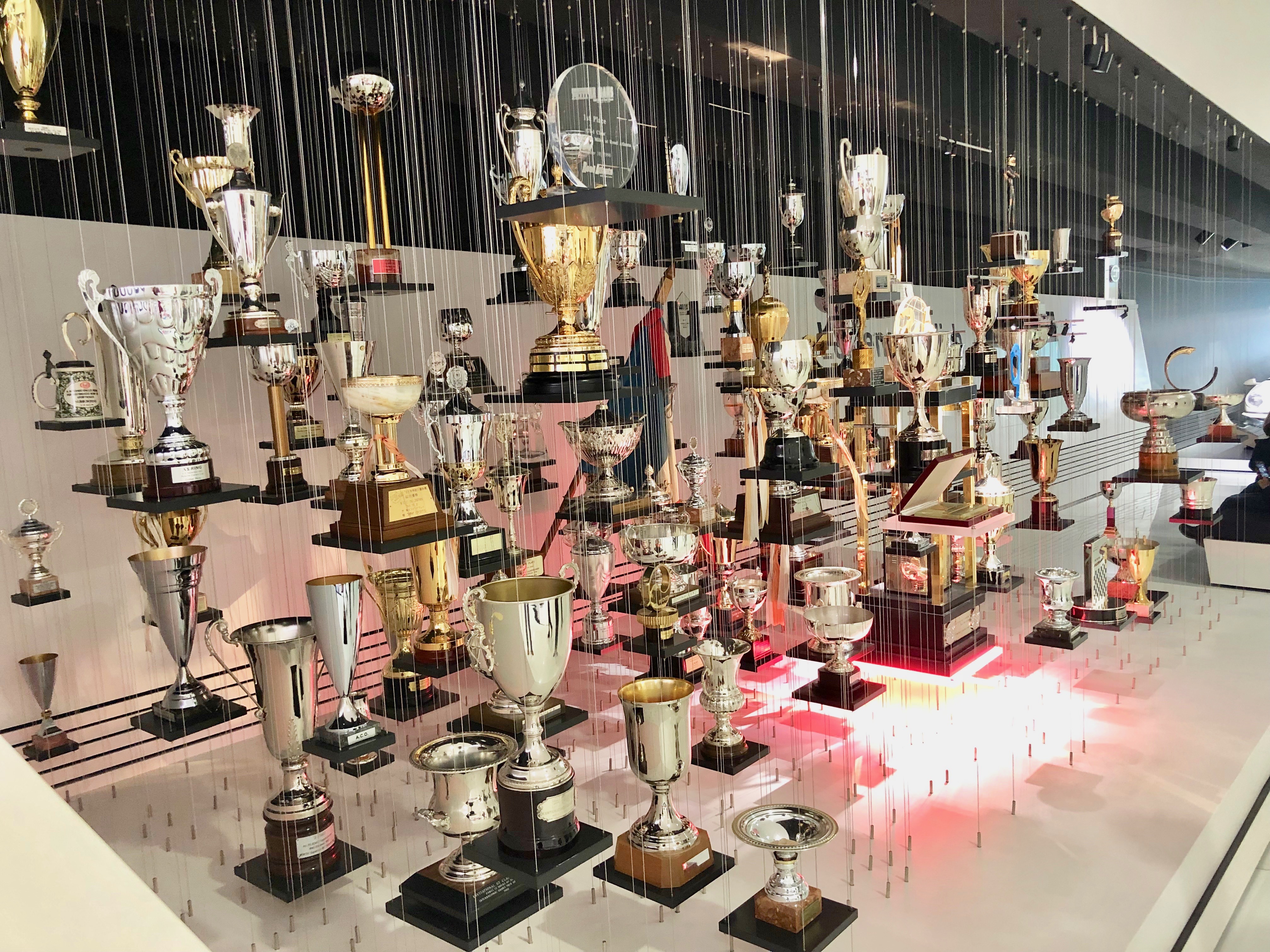 The guys at Porsche clearly love to flex their stuff, especially their awards! Porsche has had a long and successful history in racing, displayed proudly by this trophy collection, which continues to grow even to this day.

The vast racing experience they have is also evident in the modern automobiles they produce for the road (like the ’04 Carrera GT below), which share many characteristics with their track-going relatives and are sometimes even developed with the help of Porsche’s racing teams. 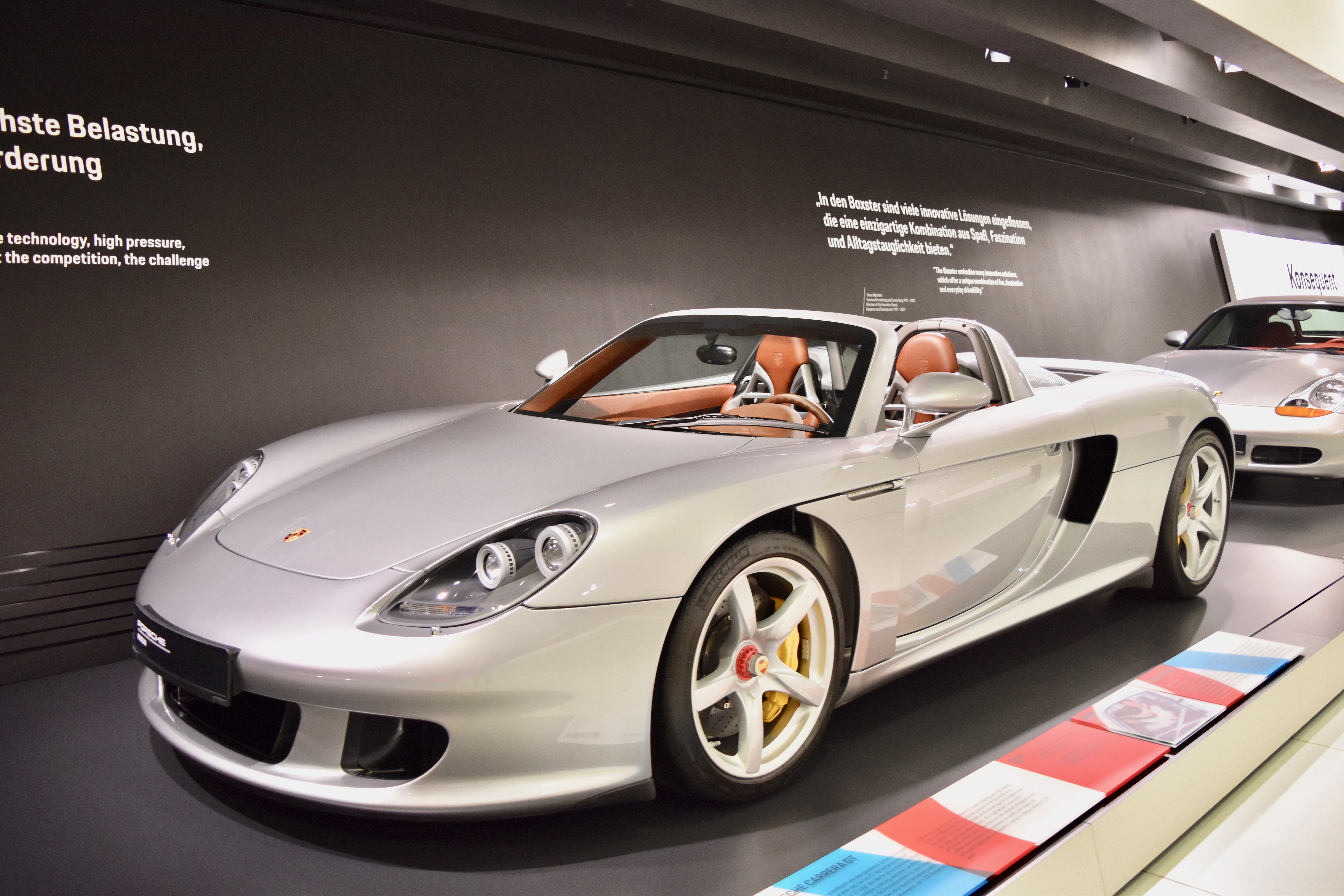 Speaking of those racing teams, up next was a selection of Porsche’s most iconic Le Mans racers.  If you grew up in the 70s and you were a racing fan, chances are you probably recognise one of these.

This one, the 917-042, was one of Porsche’s most recognisable race cars, not only due to its colour scheme, but also due to the 241.25mph speed record it set during its winning Le Mans race in 1971. 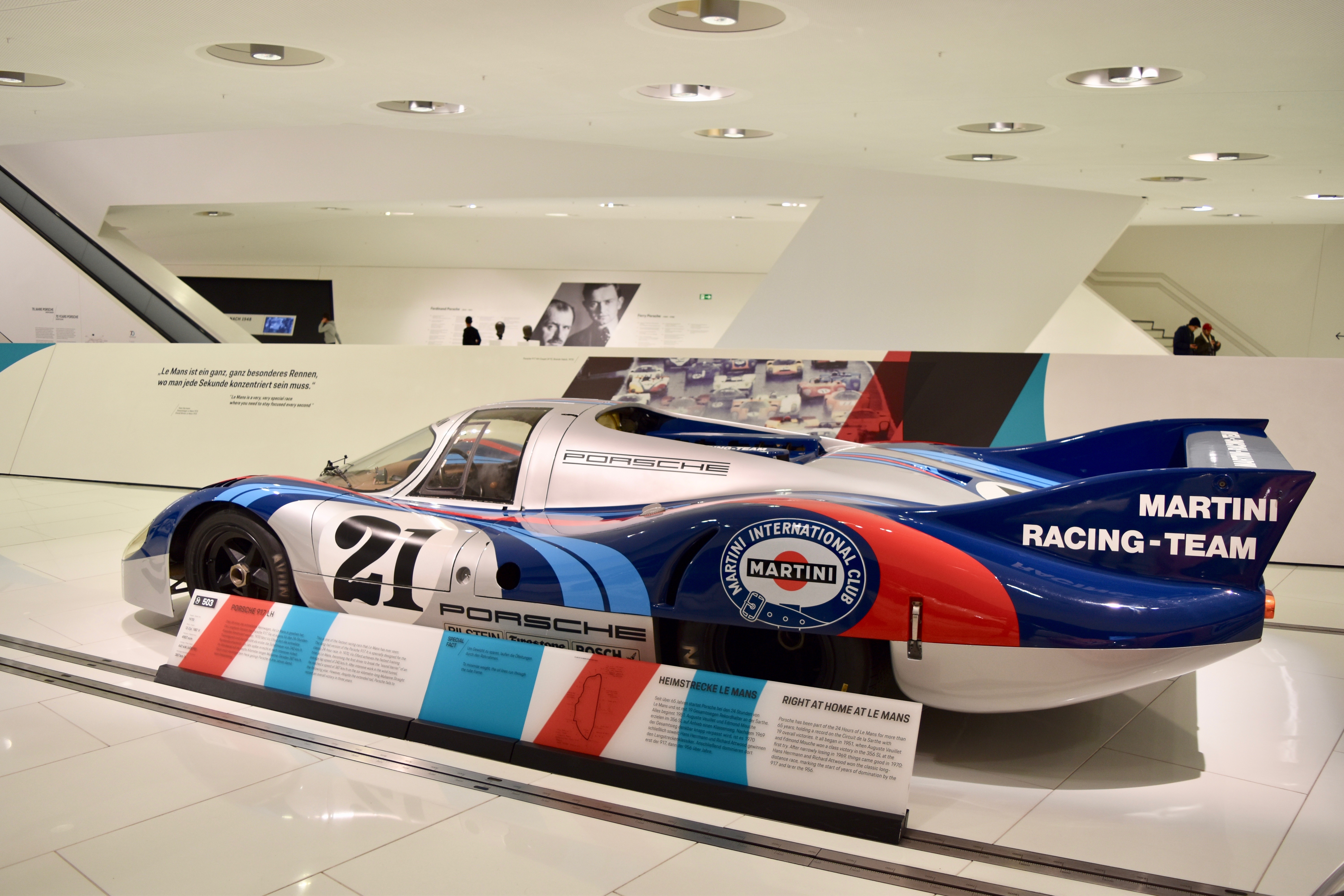 Next, the 908-LH, introduced in 1968 as the first Porsche with the maximum engine size allowed by the FIA at the time. It had a 200mph top speed, which was remarkable for its time. 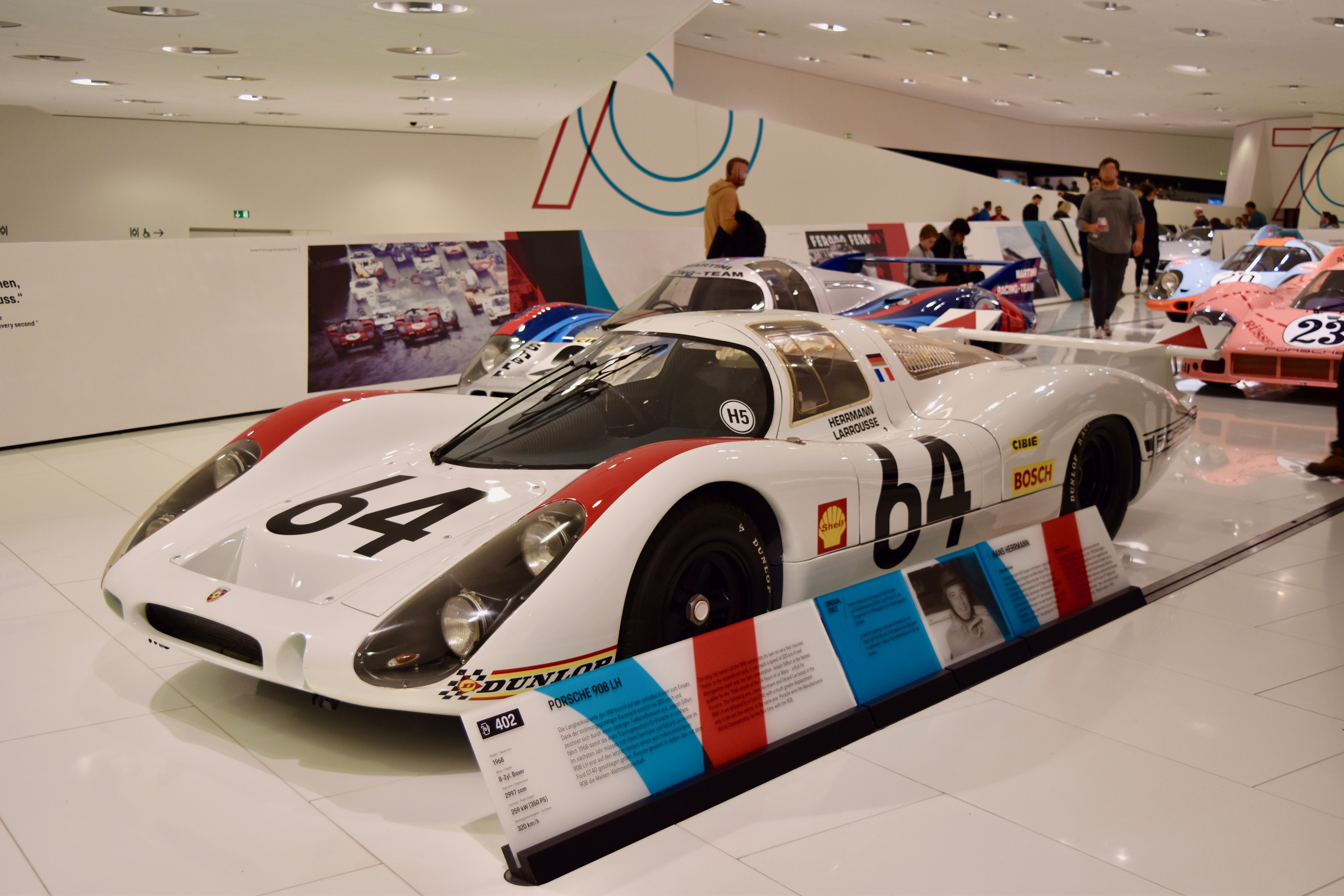 This particular 917 was an experimental test car, with names of meat cuts in German painted across it in a similar fashion to a butcher’s carcass diagram, earning it the nickname “Pink Pig” 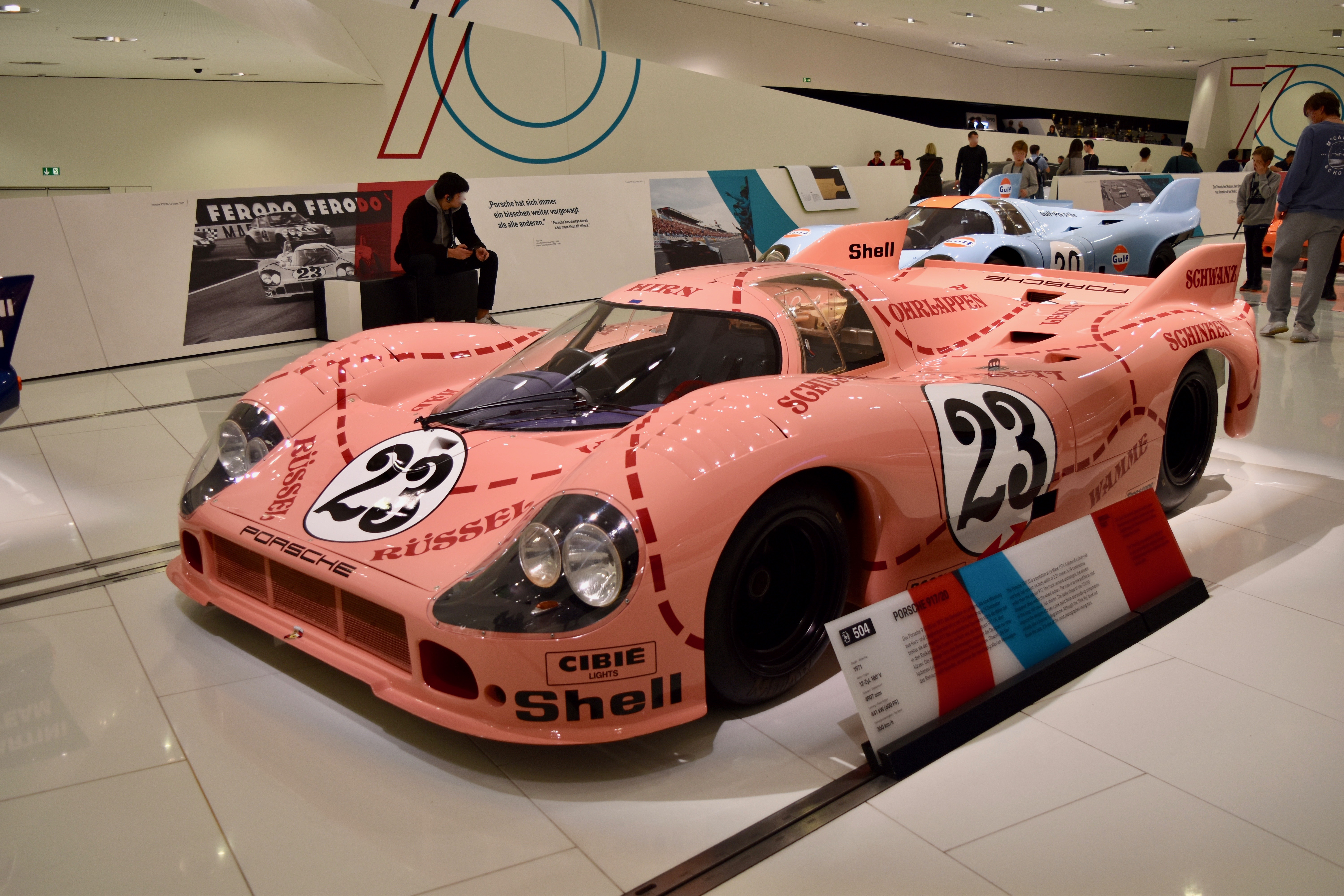 Probably the most iconic of the lot, the 917-KH, Gulf. This was the car that nearly broke the company (which was much smaller at the time), putting almost all of its assets into the car’s development in the hopes that it would give Porsche its first overall win at the 1970 Le Mans Grand Prix, which it did. The car is worth an estimated US$14 million today! 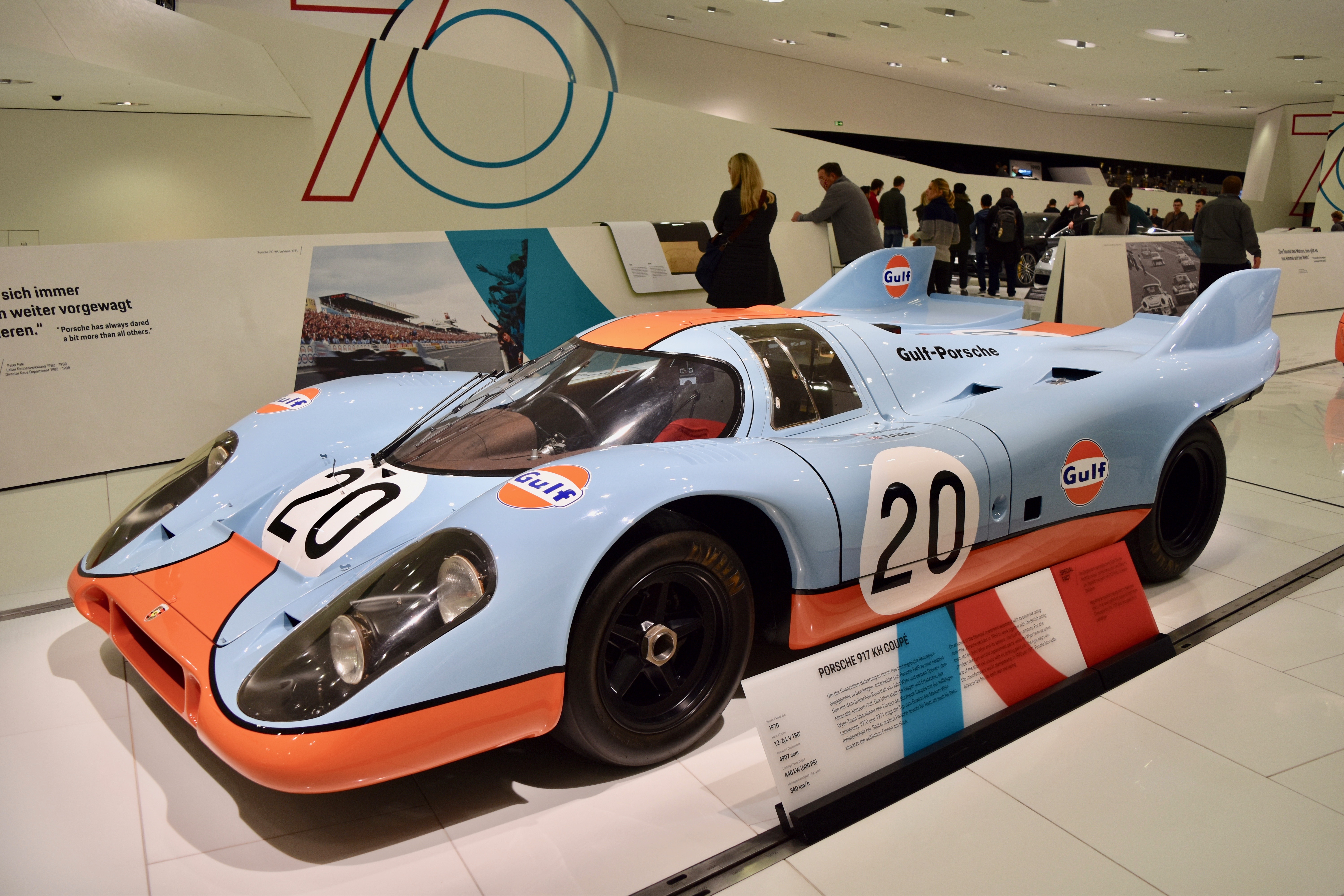 Bit of a history lesson here:

Porsche was a company which started off making cars which shared components with Volkswagen vehicles. The company’s founder, Ferdinand Porsche, helped Adolf Hitler design the Volkswagen beetle. It then began developing German tanks during the second world war, after which Ferdinand was arrested for war crimes (but never tried), most notably forcing thousands of people to work at his factories.

During Ferdinand’s 20 month imprisonment, his son began to design his own car as he could not find one to buy which he liked. This eventually became the first Porsche sports car, the 356 (pictured here behind the car marked “44”). 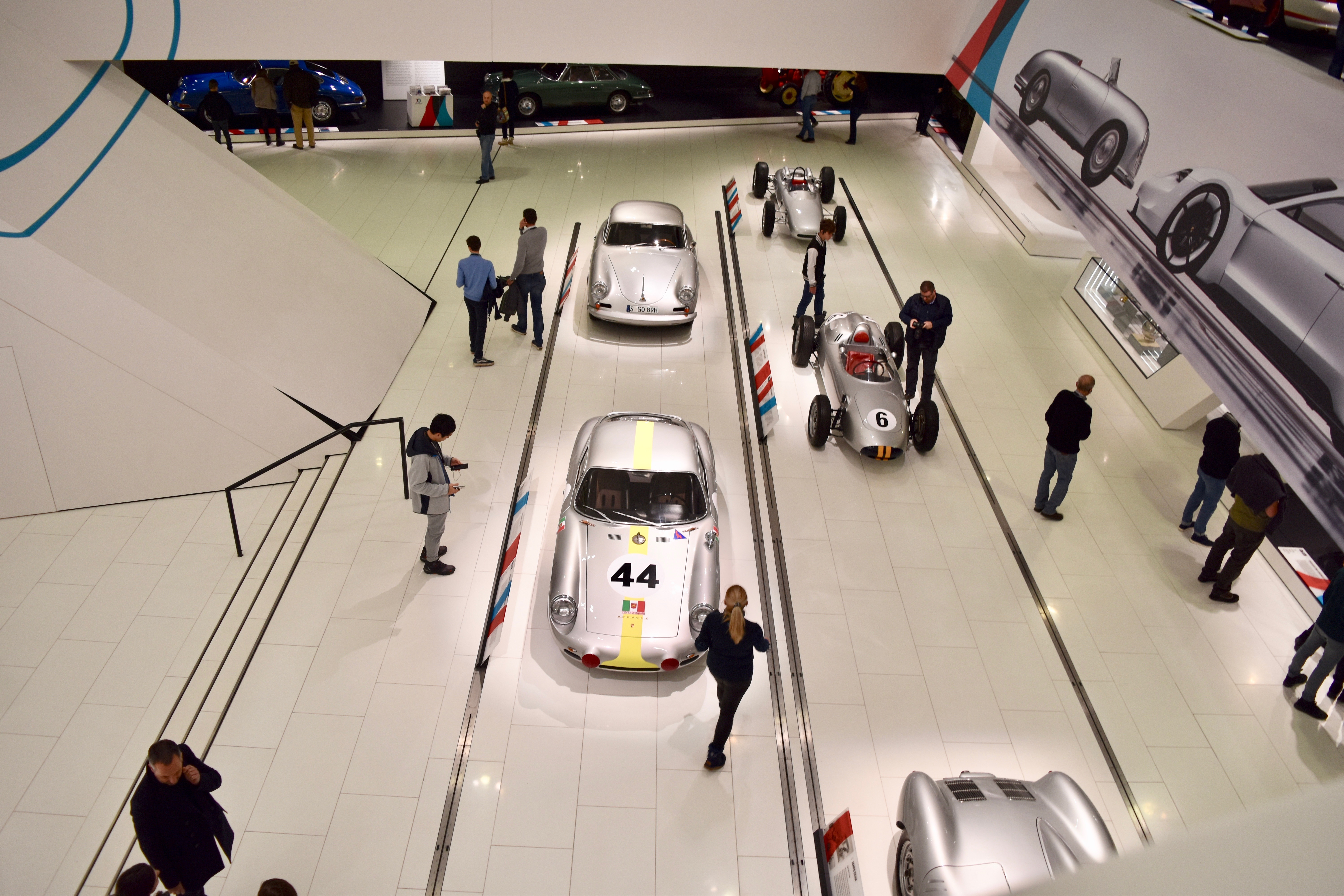 Those silver cars are some of the earliest models produced by Porsche, including the single-seat racers on the right.

As a matter of fact, the museum was chock full of racing cars like those. But seeing as I probably shouldn’t bore you guys to death, I’ll just show you a couple of notable ones and move on.

This is a pretty modern 911 GT3 RSR, which I have actually seen in action before! A few years ago, the Porsche cup would always take place on the same day as the F1 grandprix here in Singapore, which meant that arriving at the track early for F1 would allow us to catch a glimpse of these beasts roaring around. 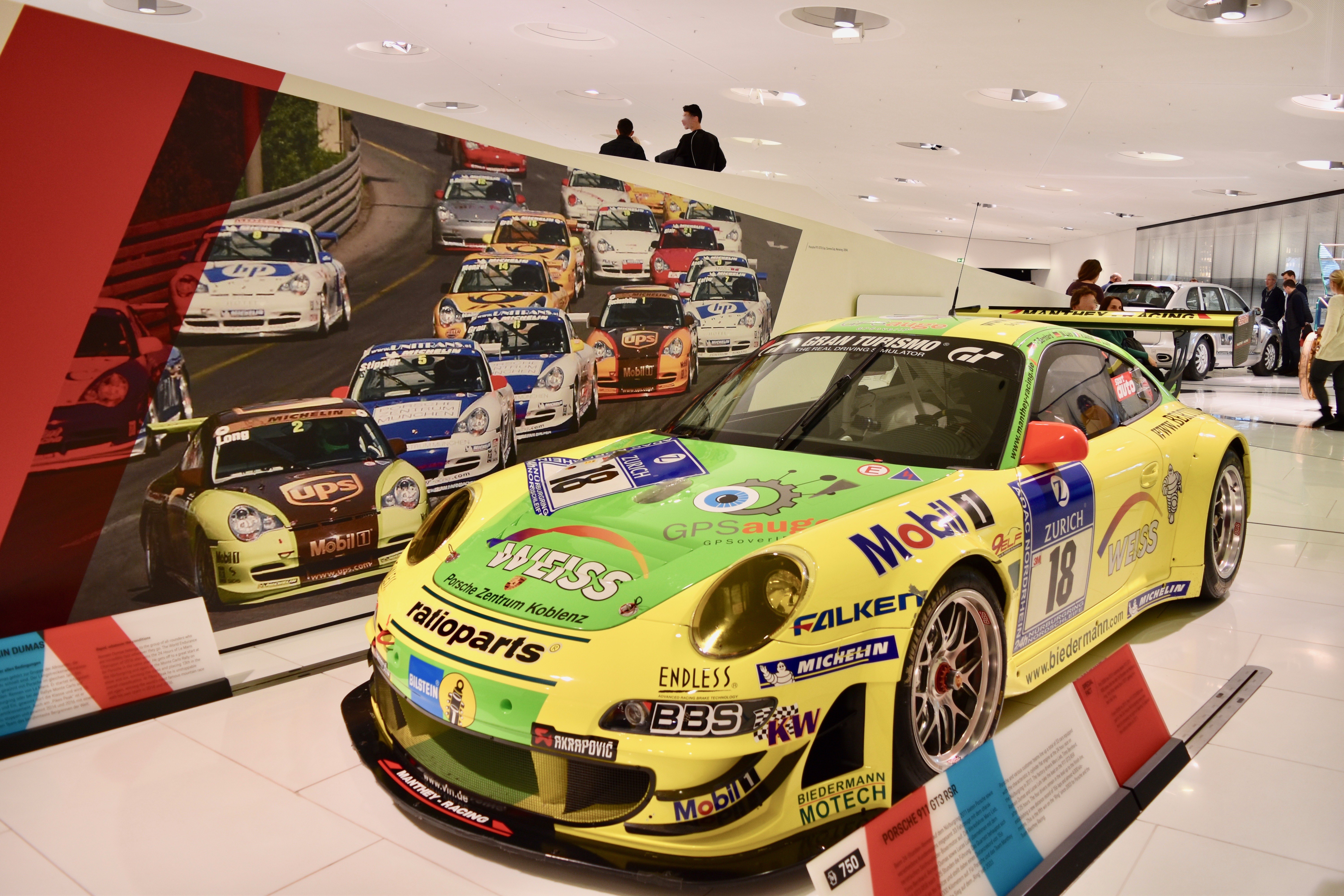 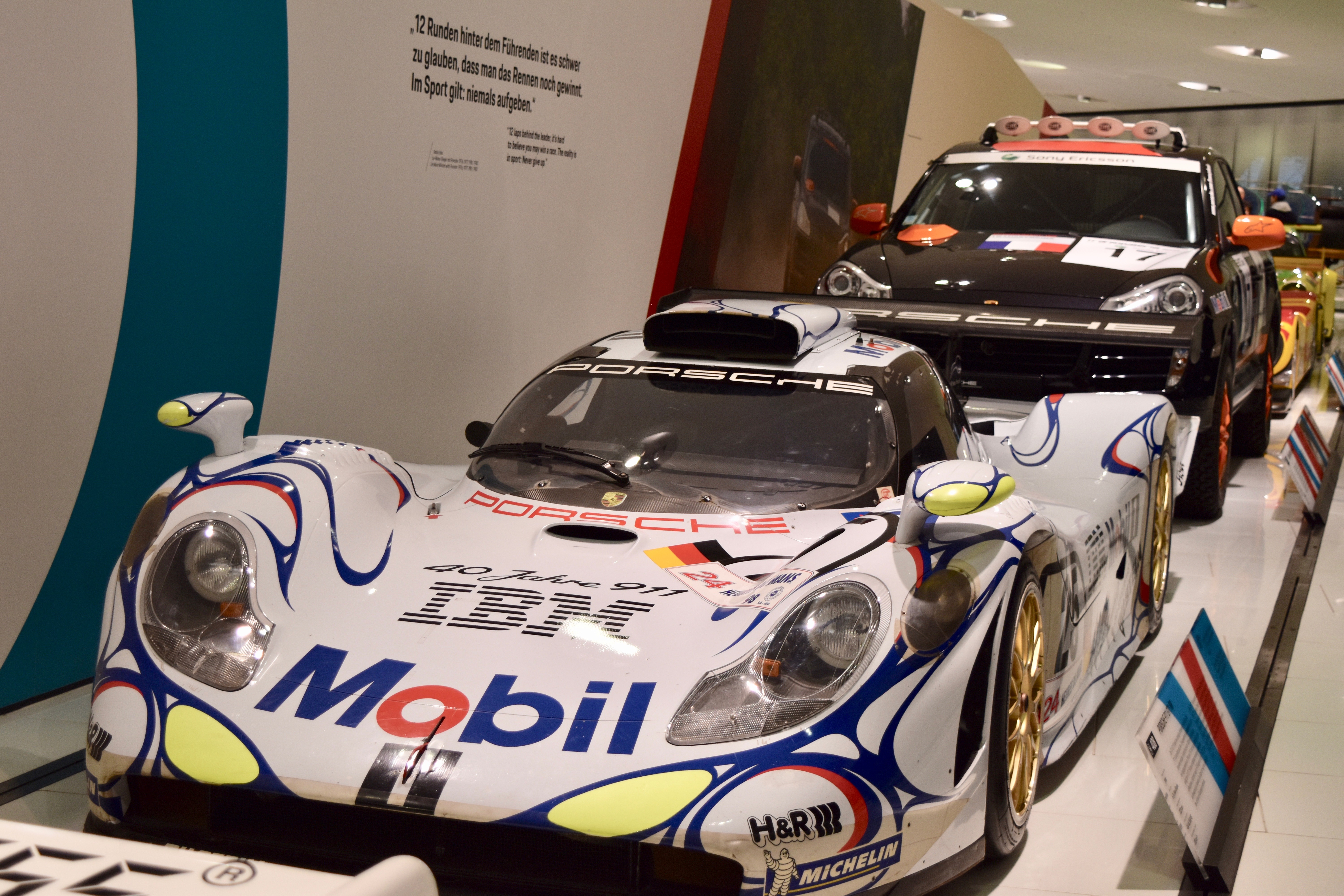 The next set of cars we came across were current models, with a twist; we could actually sit in them! This one was a 911 R which would’ve made for some epic Instagram pics, but the queue to get in was kinda long so we went elsewhere. 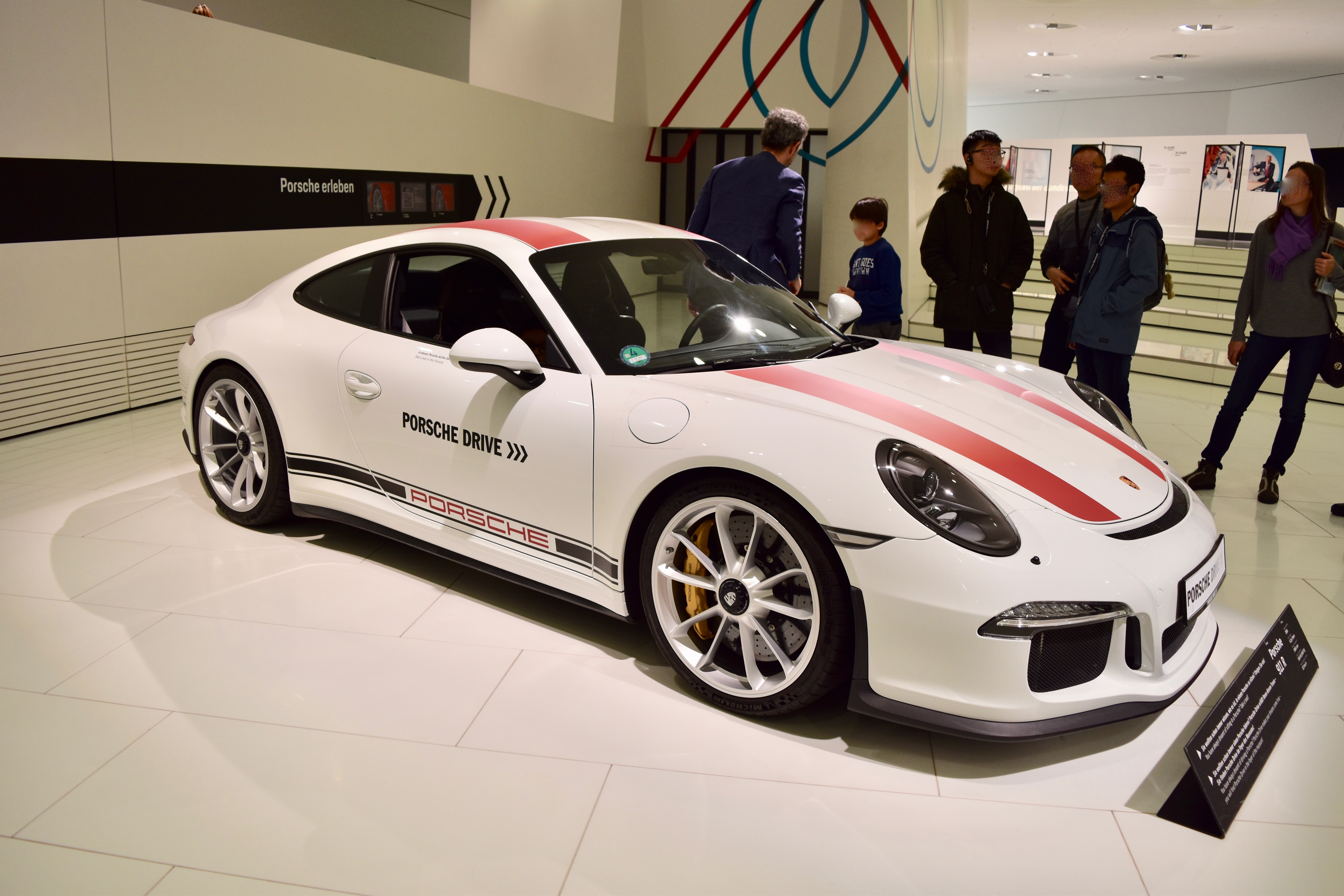 Lucky for us, we were able to hop into this lit Porsche Boxter S, which we thought was even better! Who doesn’t wanna be seen in a top-down Porsche LOL 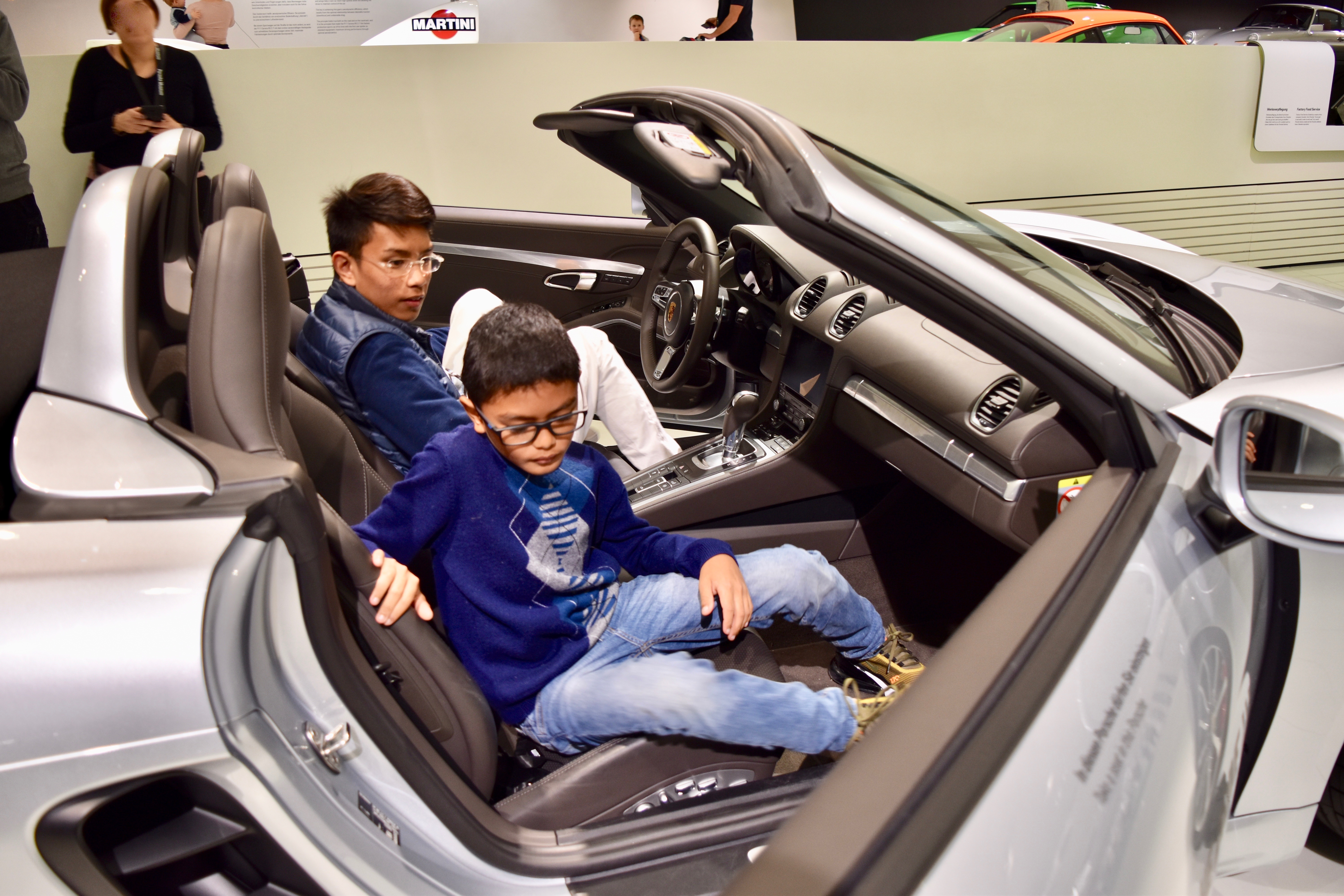 Moving on, if you guys have ever wondered what the inside of a hybrid Cayenne SUV looks like, well, there you go! To be honest, I didn’t notice much of a difference between the engine of this car and our fully petrol-powered SUV, but it was interesting nonetheless. 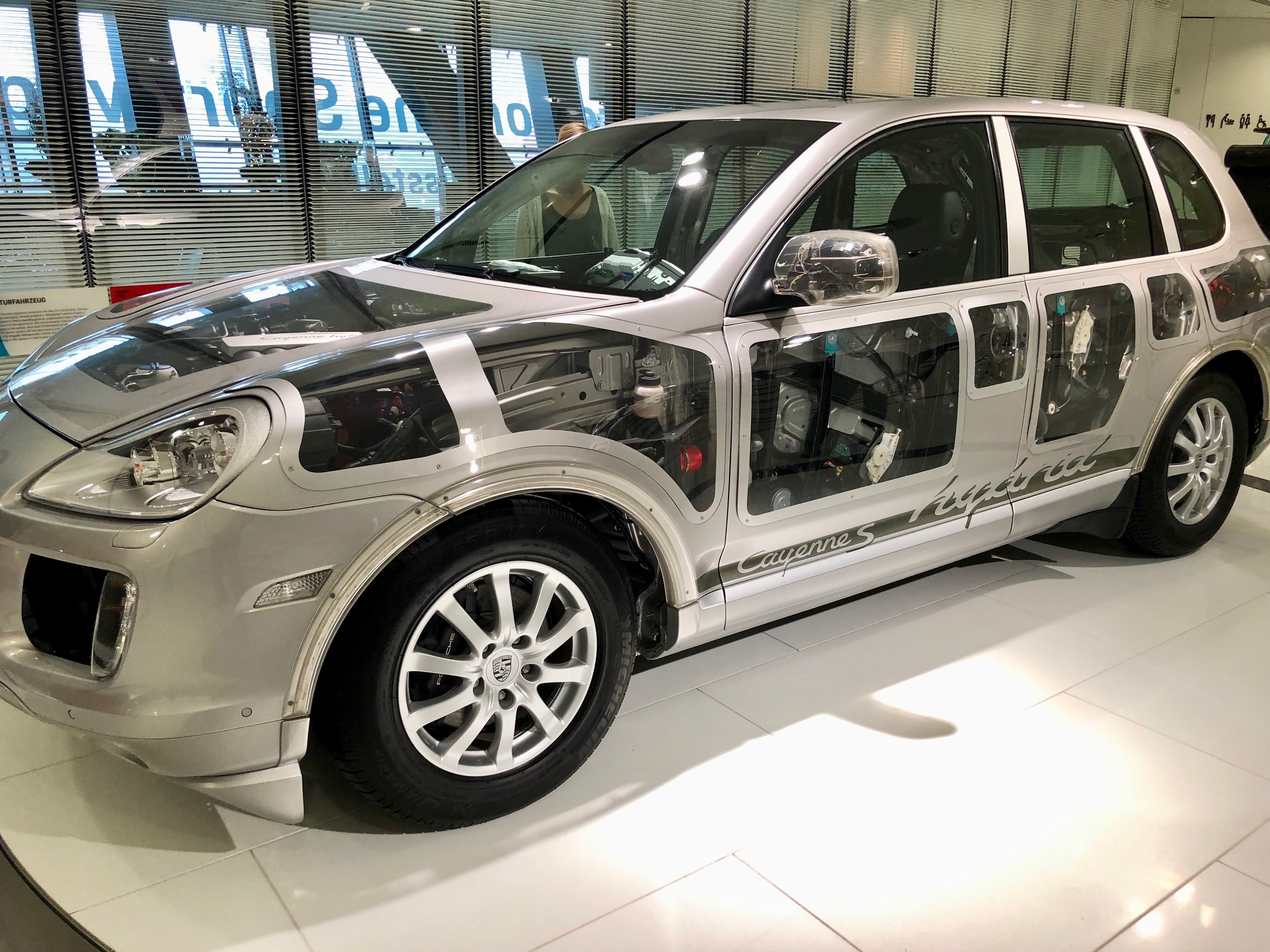 Alas, we’d arrived at the last section of the exhibits, which was a floor filled with the current pinnacle of Porsche engineering, as well as some plans for their future ambitions. There was a row of beautifully modern Porsche cars as well as several concept models which looked way ahead of their time. They’re definitely RACING ahead of the competition! (hehe that was a lame pun I do apologise) 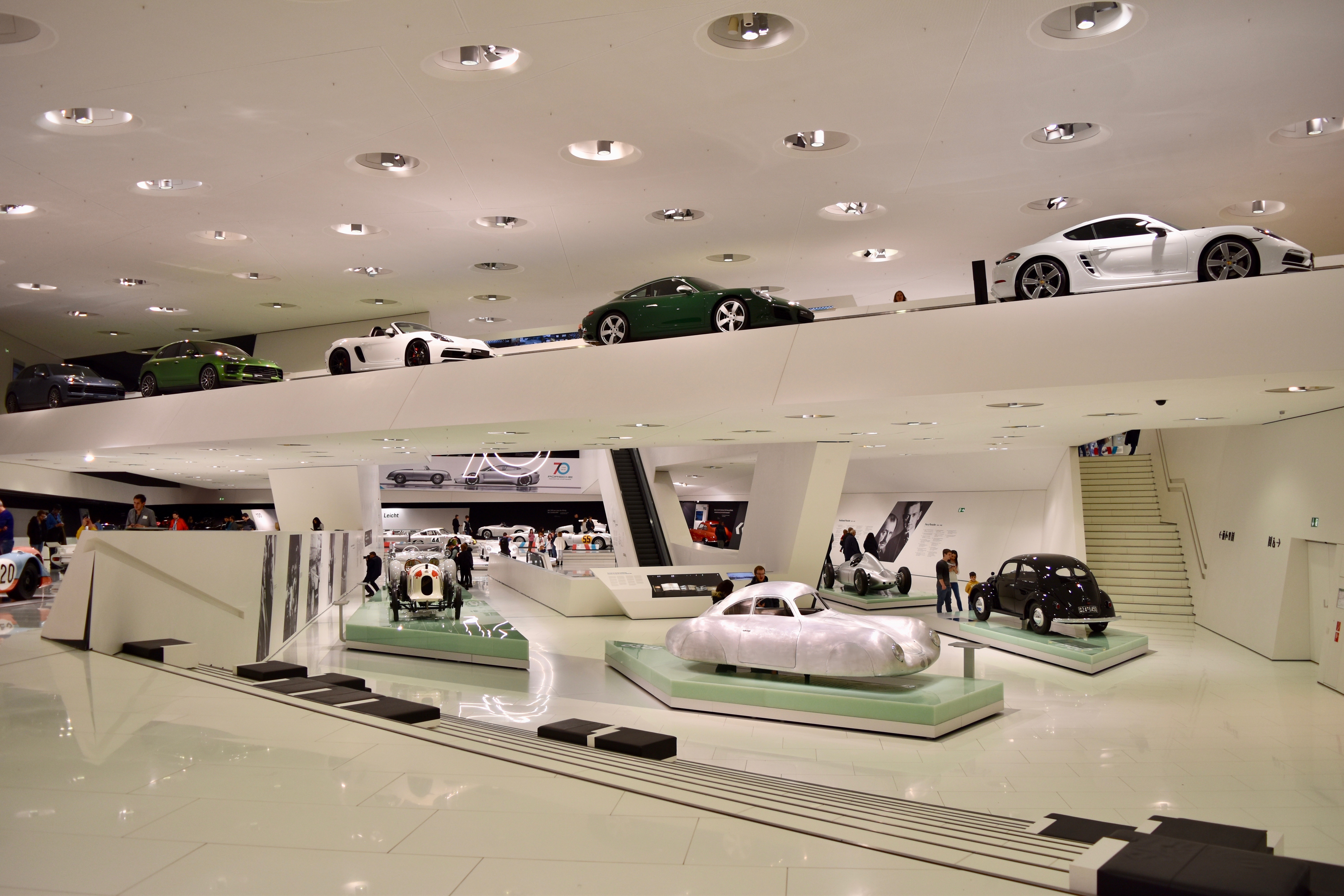 The Porsche Macan is a very common sight back home, and my dad has always been eyeing it. After seeing this beautiful green one, he seemed almost completely convinced to zoom down to our local dealer and buy one! Unfortunately for me and Joaquin, he came to his senses by the end of the trip and hasn’t bought one yet 😦 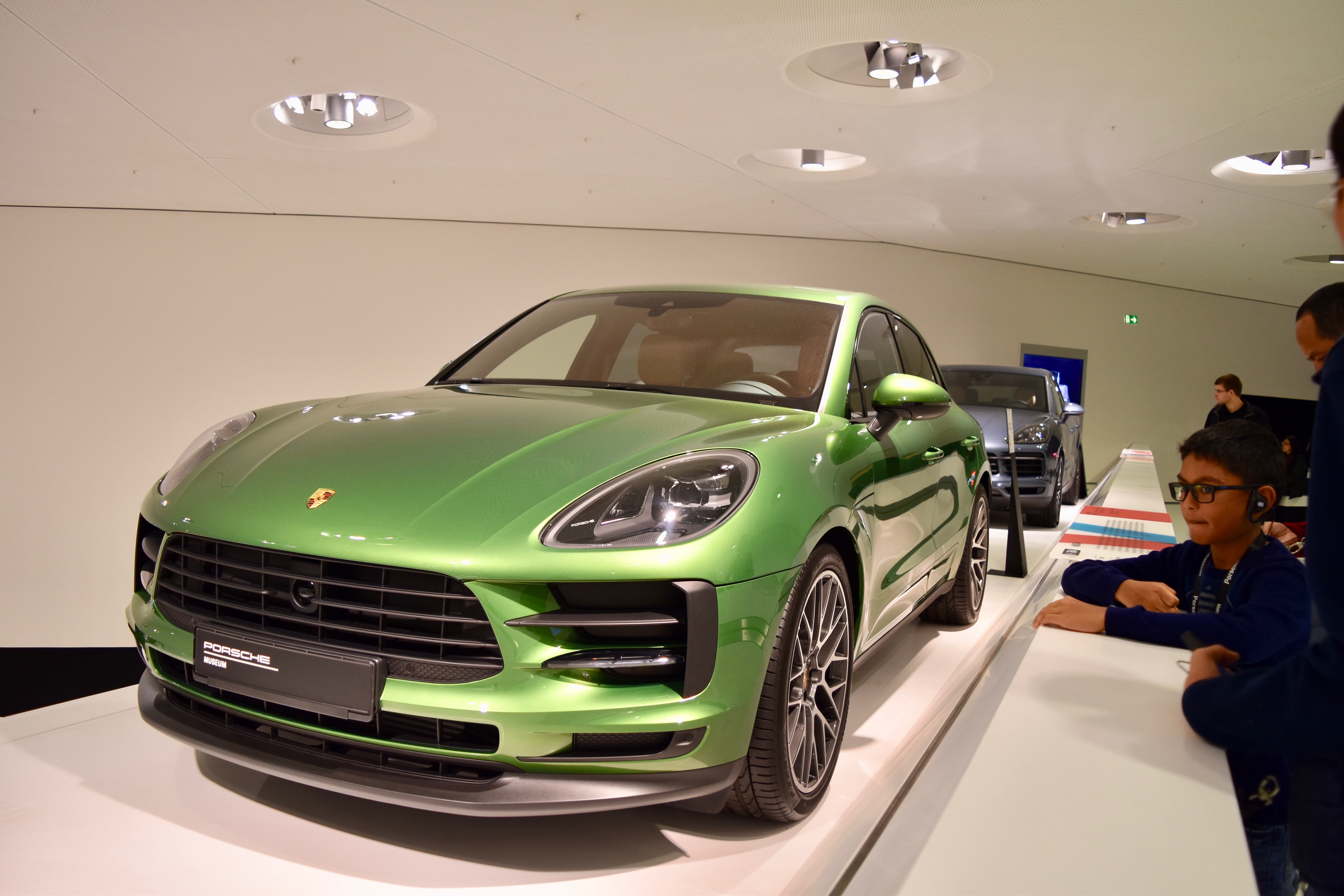 Okay, a disclaimer; at the time I was in the museum, this car was known as the “Mission E Concept”.  However, it might look very familiar to some of you guys because since then, it’s been turned into a full production car (an immensely popular one I should add), called the Taycan. It is Porsche’s first mass-produced fully-electric car, and it looks staggeringly good in person! It’s super hi-tech too which is very appropriate for a car of its type (I’m starting to sound like a salesman now whoops). 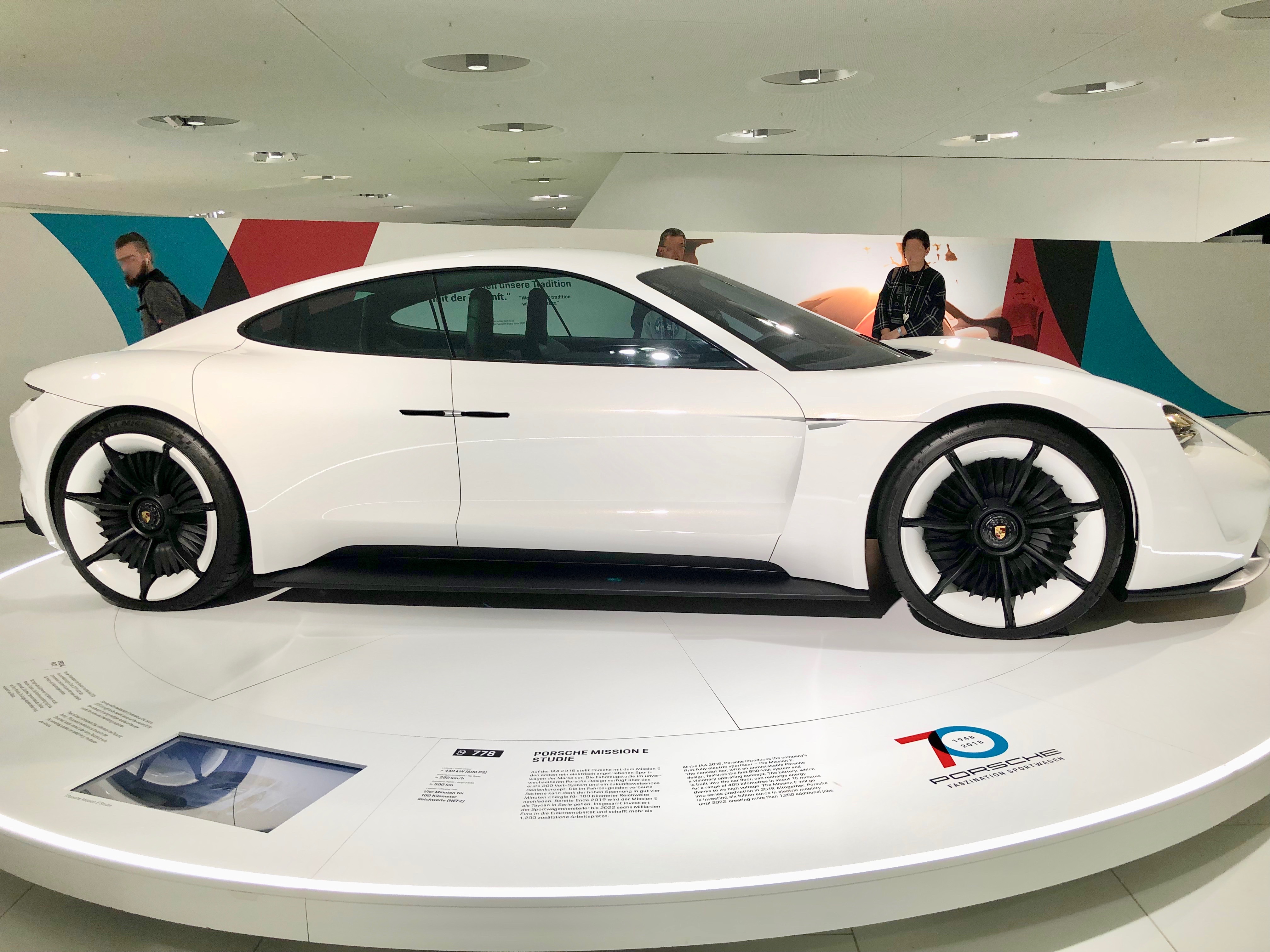 Alas, I’ve saved the best for last. The 4-wheel drive, 4-wheel steer, Nurburgring-chomping, 887bhp monster that is the 918 Spyder. This was easily my favourite exhibit, as owning a hypercar like this is my dream for when I’m older! The fastest road-going Porsche yet produced, this car is one of the fastest petrol-electric hybrids in the world, with a staggering top speed of 211mph (340km/h) and an eye-watering price tag of US$845,000. Truly a celebration of how far Porsche has come as a brand. 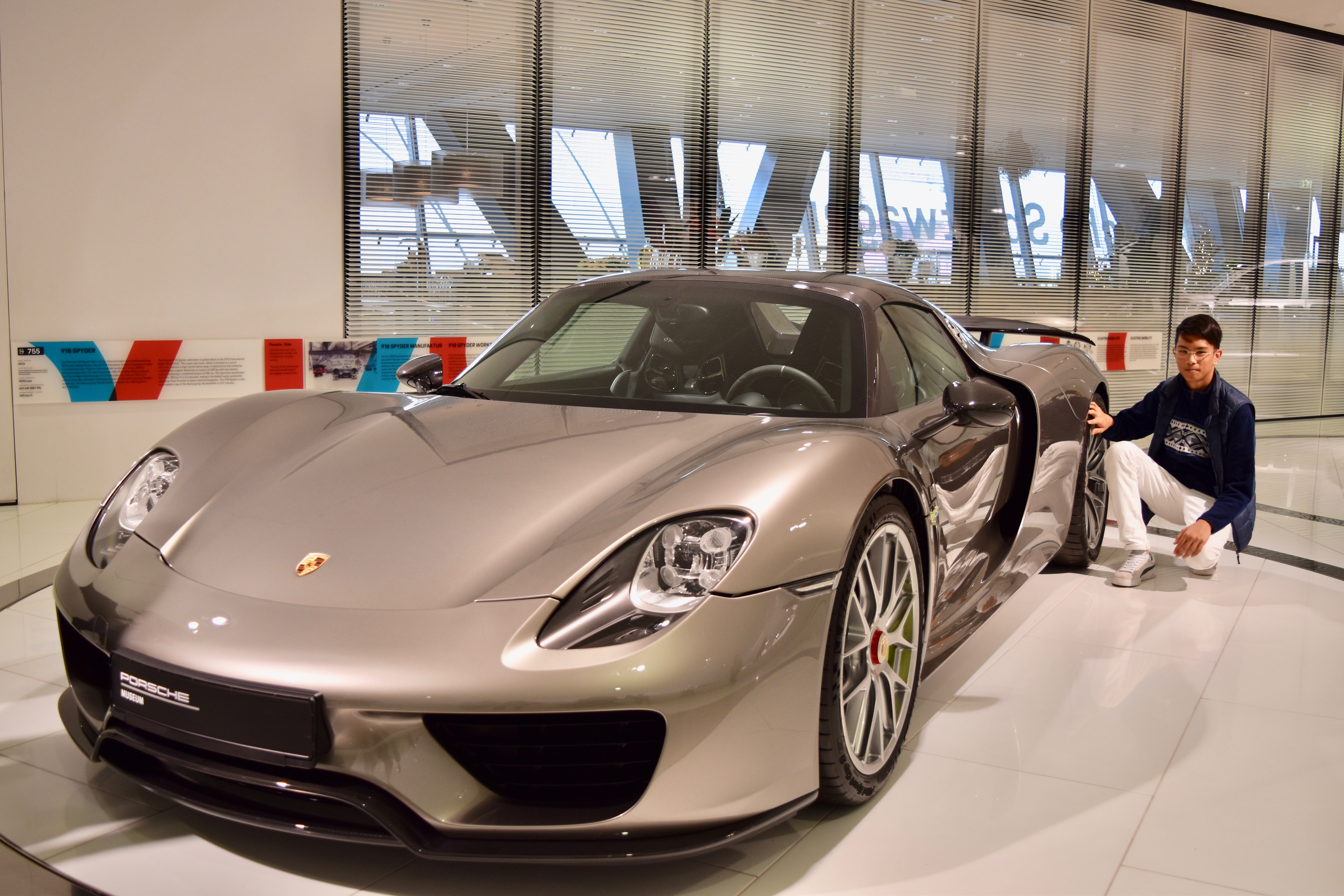 In fact, I love it so much that I’m going to include a second photo of it 🙂 Notice those awesome roof-mounted exhausts! They are up there to improve aerodynamics and I reckon to watch them spit flames while the car hurtles by at a hundred miles an hour would be a sight to behold. 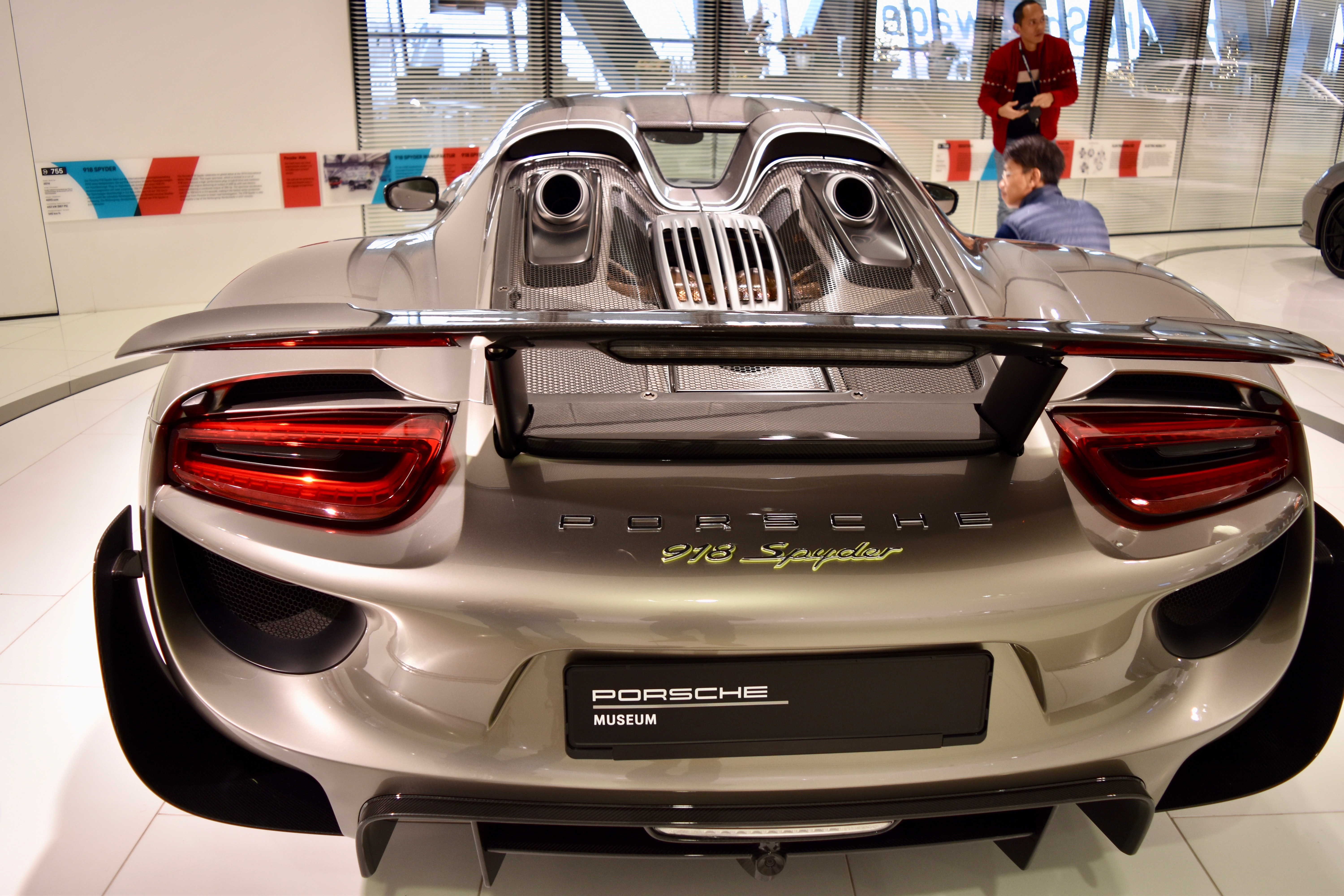 Unfortunately, this is where we part ways :// It’s been really great telling you guys about my incredible Porsche Museum experience. I hope you found some of it interesting or learned something new!

By the way, there’s so much more to the museum than I put forward through this blog (I only included the more noteworthy exhibits that wouldn’t bore you guys to death). If you guys ever pop by Stuttgart, or Germany for that matter, I’d strongly encourage you to check out this place. You don’t even have to be an absolute car nerd like me to enjoy it!

This is the train we took back to Munich. Goes as quick as that 918 I think XD.  This did mark the end of our astounding Germany-Austria trip and we couldn’t have had a better finale! I’ll be passing the baton back to my mum now. Try not to miss me too much; knowing my mum, she’ll probably have me back again soon 😀 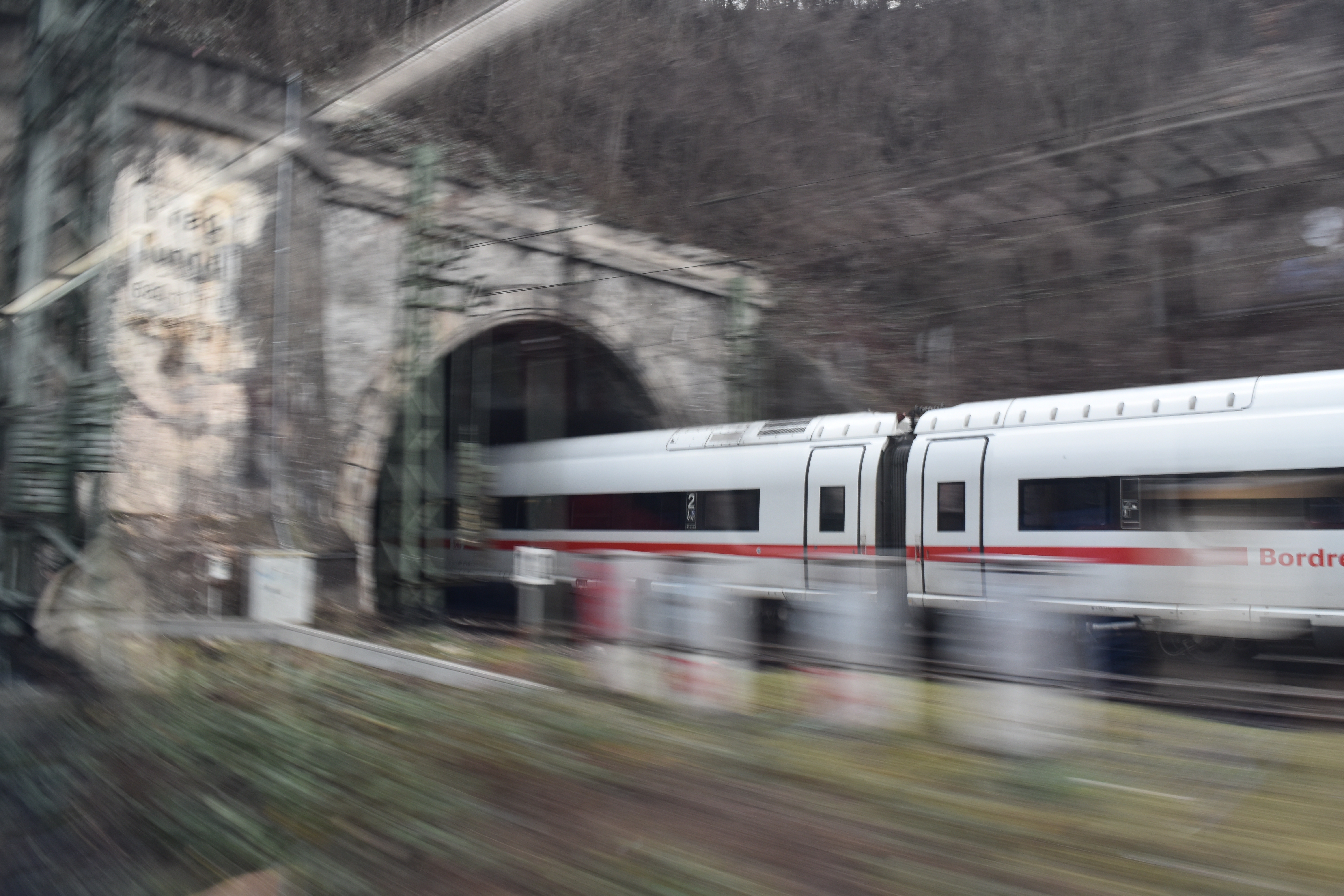 Day 18 of 18… The following day, we headed back home to Singapore… 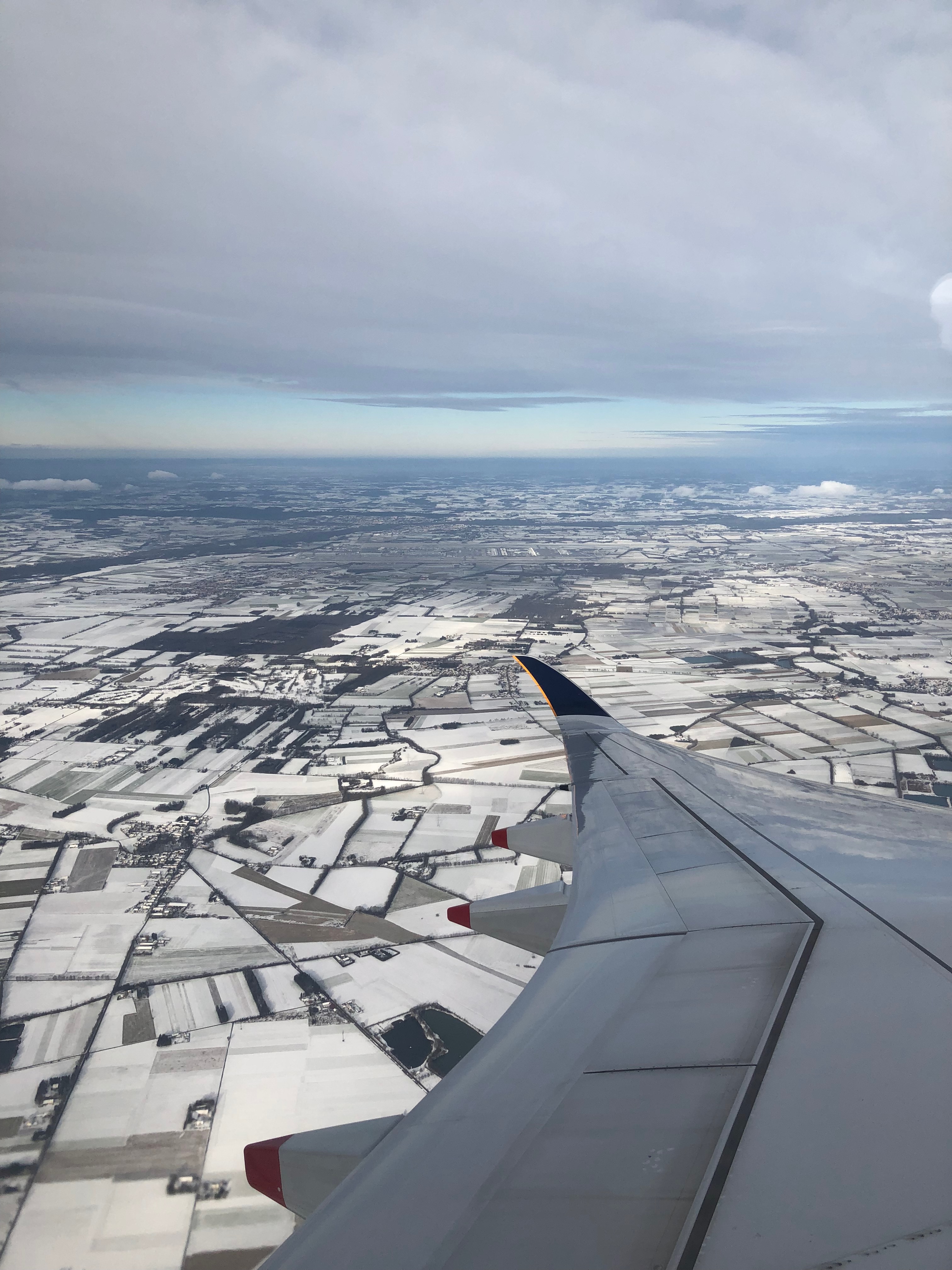 Here are the other posts during our Bavarian and Austrian holiday: