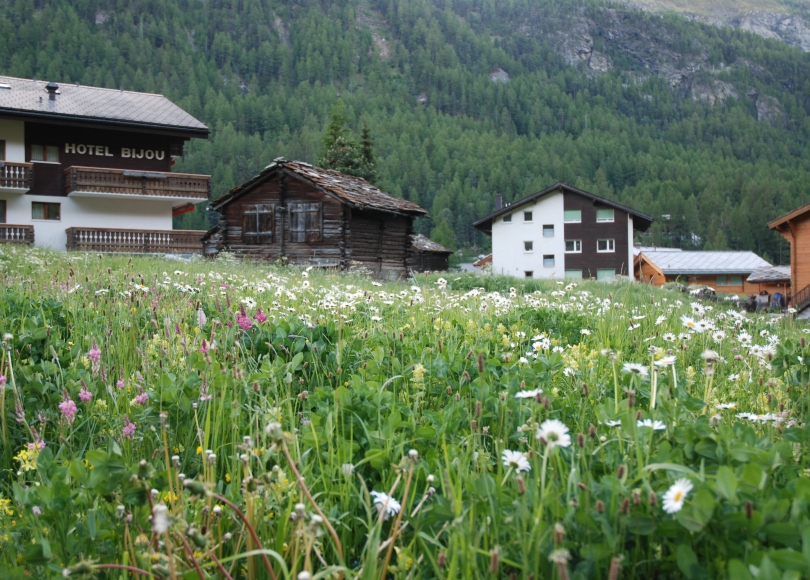 Day 11. We travelled two and a half hours on a regional train from Geneva to the town of Visp.  From Visp we road for another hour the Matterhorn Gotthard Bahn, the mountain train which brought us to Zermatt.

Zermatt was a gorgeous valley. It had pretty cottages and small hotels. There were no gas-fueled cars in the village and the only modes of transportation were the tiny electric-powered vehicles and horses.

We reached our accommodation, Hotel Matterhorn Focus, around lunchtime.  Our room was large, the kitchen was glorious, and when we stepped out to the deck, we could see actually the great Matterhorn! Our hotel was not far but it wasn’t in the town centre where the shops, restaurants and bigger lodges were located.  It’s perched on a hill, on the quiet end, closer to where the wildflowers are, exactly where we hoped it would be.  Thanks to Tripadvisor for the tip!

While the rest of us were exploring our room, Joaquin climbed up to the field right beside our deck and room to pick some flowers.  Ah this boy knew where the best things are – outdoor.

This was the canal that runs throughout the town. This picture was taken a few meters down from our hotel.

After lunch, we headed to the mountains – to Sunegga, to get a closer look at Matterhorn and to hike around Leisee Lake. We took a funicular to Sunegga summit. It was a short ride but entirely under the mountain. 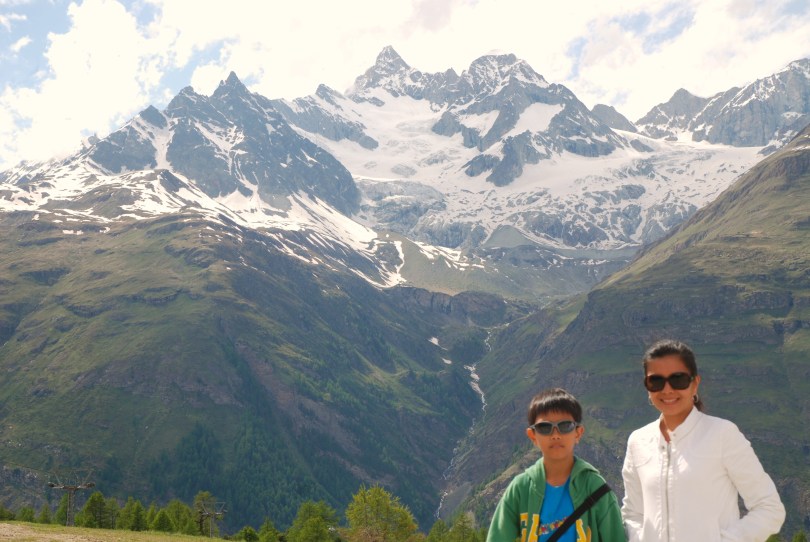 This sight greeted us when we came out of the funicular – snow-capped mountains that seemed within our reach.  And best of all, we were greeted by the Matterhorn!

This family picture was taken before we hiked to Leisee Lake. We loved this shot – the smiles on our faces and Matterhorn in the background.

They say people swim here and this mountain lake becomes a popular picnic area when the weather is warmer.

We started ‘collecting’ benches in Portree, Scotland. After that, we always seem to have a bench wherever we go. 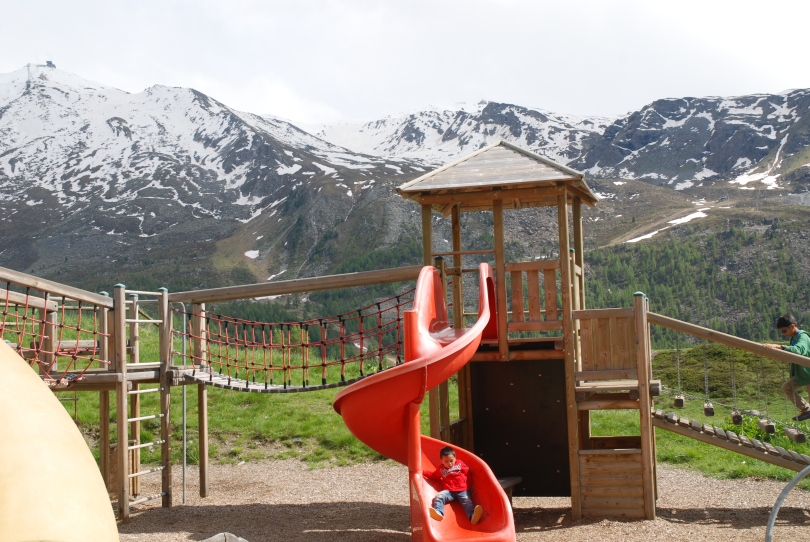 And there’s more! There was a playground just a few meters from the lake. And a hammock too!

As we basked in the natural beauty of Sunegga, we couldn’t help but compare it to our trip to Isle of Sky in Scotland the year before. We loved Isle of Sky a lot and we said that adventure will be difficult to top. And then we came to this beautiful Swiss Alps and we were proven wrong.   Isle of Sky gave us a sense of peace and tranquillity.  Zermatt gave us a bit of paradise…

We came back down to the town centre around 5pm.  Benjamin bought a new buddy, Matt, the Swiss cow. Joaquin’s Walking Mickey has a new friend.

We had dinner at Ristorante La Dolce Vita, which served Italian cuisine and was among the many restaurants in Bahnhofstrasse, the main street in Zermatt.

We returned to the hotel around 8pm but we knew the day just wasn’t over. I once saw this scene on a travel channel many years ago – a family relaxing in an alpine villa, swimming at twilight, wild flowers on the hills and snow-capped mountains in the distance… It became my dream, and on that day in Zermatt, I said that dream came true.

The sunset that night gave a pinkish orange glow to Matterhorn – if only Dad’s shot had captured those colours.  I remember saying that it was too beautiful…surreal, almost spiritual…

Day 12.  Our second day in Zermatt! We were going to brave the cold and windy MatterhornGlacier Paradise at Klein Matterhorn, one of the highest peaks in Zermatt, and in the afternoon we will take the scenic Gornergrat Railway.

We started the day’s adventures with a gondola ride from the valley to our first stop – Trockener Steg.  We can see the entire valley from the gondola. The kids started referring to us as a family of 6, yup Walking Mickey and Matt included. 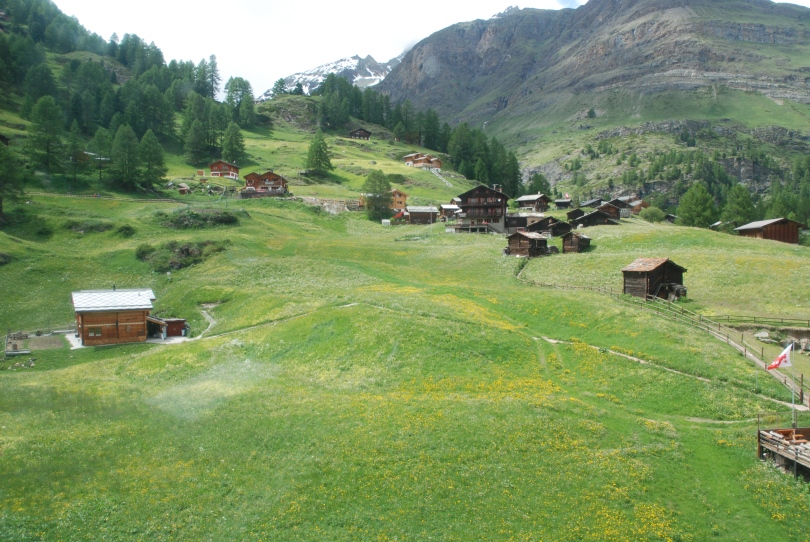 After a few minutes into the gondola ride, the scenery quickly changed from flowers and conifers to snowy mountains.  Summer has turned into winter. And the white seemed endless from where we stood. Occasionally we would see small streams from melting snow.  Joaquin said we were now entering another planet.

It was -4 degrees and was snowing and blowing. It was Joaquin’s first snow fall and he was loving it!  At the Trockener Steg, which is 2939 above sea level, ski is open 365 days a year.   Next time when we visit, it would be awesome if we could ski here.

For now, the three boys were content throwing snow balls at each other.

It wasn’t Daddy’s first time in Switzerland. He spent Christmas in Zurich 10 yrs ago when he was studying in Germany, but it was his first time in Zermatt, and he thought it was amazing. 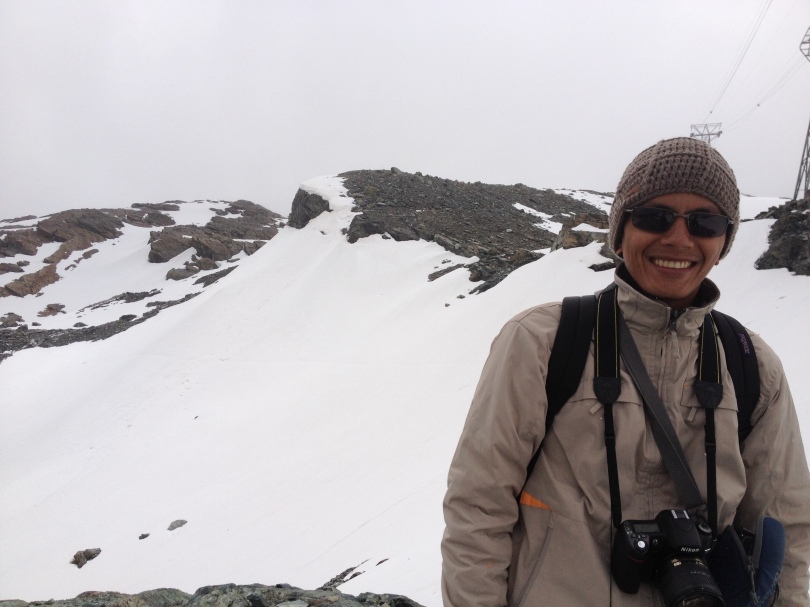 After about an hour or so in the snow, it started to blow quite heavily and so we headed inside the Trockener Steg cable station to have lunch. The kids had Spam and rice and the adults had different versions of rosti.

After thawing ourselves at the restaurant, we took our 2nd cable ride of the day. It was big and could accommodate about 15 people or so.   It was also the highest cable ride in Europe. While at the cable car, we already knew it was going to be very very cold once we step outside but we were ready to ‘conquer’ one of the Alps’ highest peaks – the Klein Matterhorn. Klein Matterhorn literally means little Matterhorn. It is next to the great big Matterhorn, the mountain of all mountains. Kids are familiar with Matterhorn as the mountain in the Tobleron chocolate! 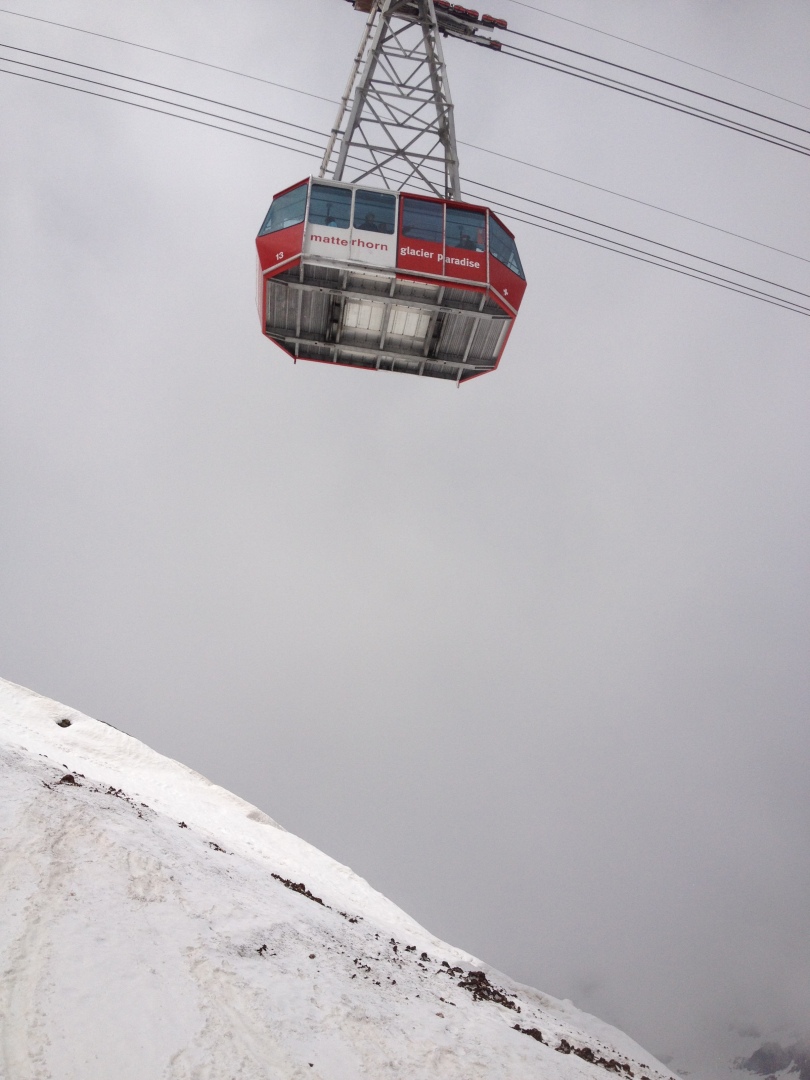 We entered a few clouds and passed by some glaciers and mountain peaks.  We saw Theodul Glacier which they say is where ski athletes train during summer.

When we reached the summit, the thermometer read -11 degrees! We were not ready for this! And most of all not ready for a blizzard.  The strong winds and whirling snow made it impossible to see anything beyond three meters. But we did not come 3883m (12,739 ft) above sea level and not take any picture. While the kids were hidden behind the walls of the cable station, Daddy and I braved the cold. It was only a few steps away but it was unbearable to linger outside even for just 1 minute.  Darn, we should have brought furred parkas and weather-proof boots.

There was nothing else we could do but retreat.  Luckily there was a hot Milo vending machine at the station. The hot drink warmed us up a bit. The air was thin at this altitude and we could feel it. It could have been worse if we did not stop at Trockener Station earlier to acclimatize, which according to the station manager is advised for families with small children – to get off at the lower stations first to test the air.

If it wasn’t snowing heavily and we were wearing proper clothes, this would have been the picture… We would have gone inside the Glacier Palaceand see these nice ice sculptures…

Around 3pm, we were back in the valley, where it is was summer and a warm 15 degrees Celsius. We got ourselves ready for the scenic Gornergrat Railway. The ride up the mountain was about 45 minutes and the train passed through tunnels and forests, over bridges, and past waterfalls and lakes. 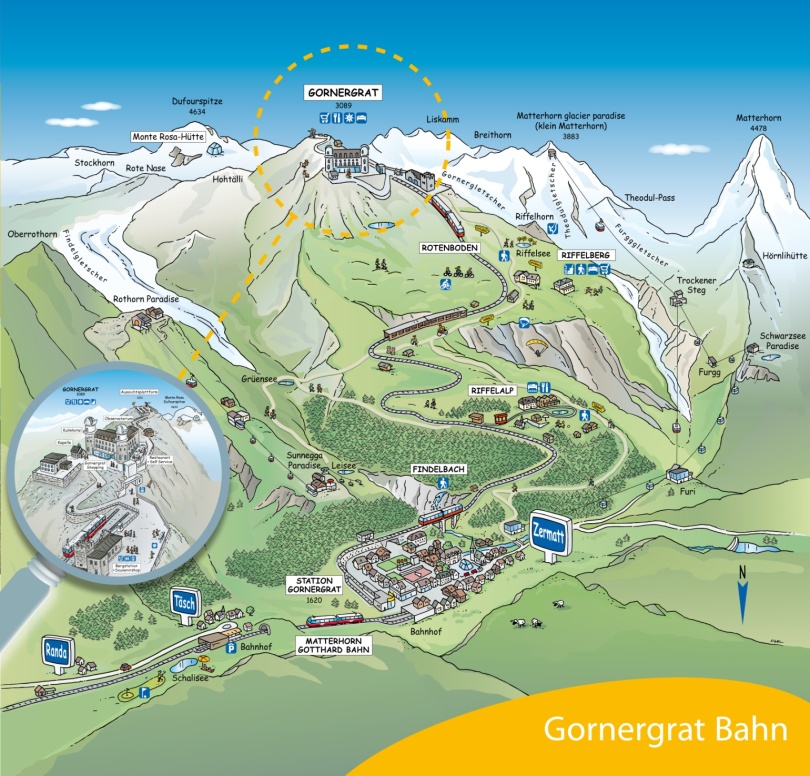 We didn’t have a nice photo of the train so we had to borrow this from Zermatt.ch/en. It was a bit cloudy too and so Matterhorn was not in sight from Gornergrat. The boys enjoyed the train ride, while Daddy and I indulged in the awesome views. We were super grateful today; we knew it’s not every day that we get to experience nature in such a grand way.

Finally, we reached the Gornergrat Station! It was windy and cold but we had fun anyway. There were not much people, and the restaurants were closed. Apparently, some restaurants close after the winter season and open again only late in the summer. 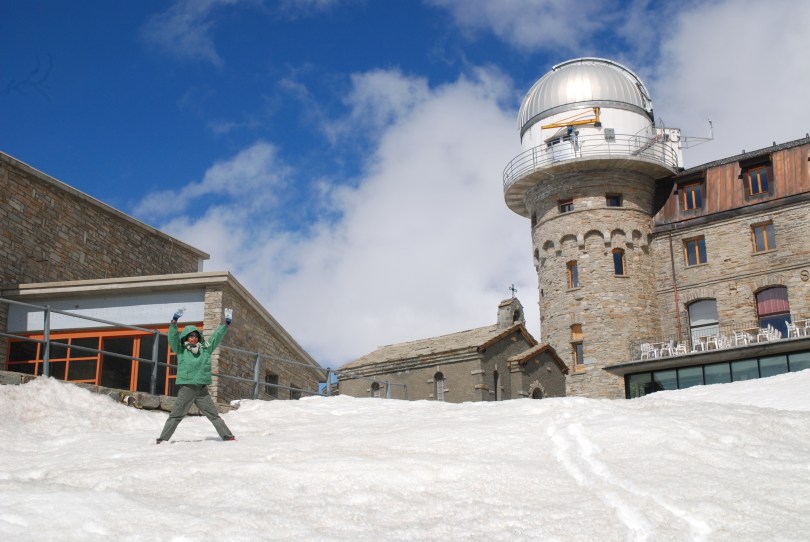 Gornergrat had amazing views of the many mountain peaks in Zermatt. Ah, if only the cafes were open, this would have been the nicest spot to sip latte.

The mountain behind us was Monte Rosa and behind it was Italy already.

We made sure we get to take a picture of Grenz Glacierand so even if it was windy, Joaquin and I bravely posed for a nice shot.

This was one of Daddy’s favourite shots during our trip, a picture of a church at the summit of Gornergrat.

After an hour or so, we already had to leave Gornergrat to catch the last train back. But we first stopped at Riffleberg Station to see if we could have some coffee, but the Riffleberg Hotel Restaurant was closed. The kids enjoyed the short stop anyway and even got to ride this red Swiss mountain cow.

Back in the valley, instead of taking the electric mini bus to the hotel, we knew it would be better to walk and experience Zermatt’s beautiful town one last time.

It was a quiet little town. We all agreed that we could live there.

Day 13.   We contemplated on staying one more day in Zermatt, but it meant we will have to move the bookings for the trains and the hotels and miss Lucerne. And so with heavy hearts, we packed our luggage and bid goodbye to Matterhorn. But today we still have another thing to look forward to! We were going to take one of the most famous scenic railways in the world – the Glacier Express!

The train was so open, you’ll need sunblock and a wide-brimmed hat.

Benjamin and Matt were inseparable.

These were just some of the sceneries during that truly beautiful  5 1/2 hour train-ride. 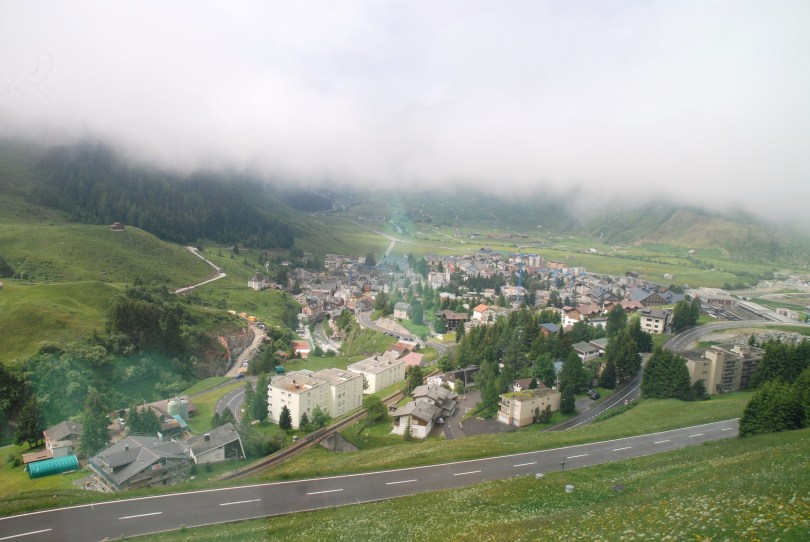 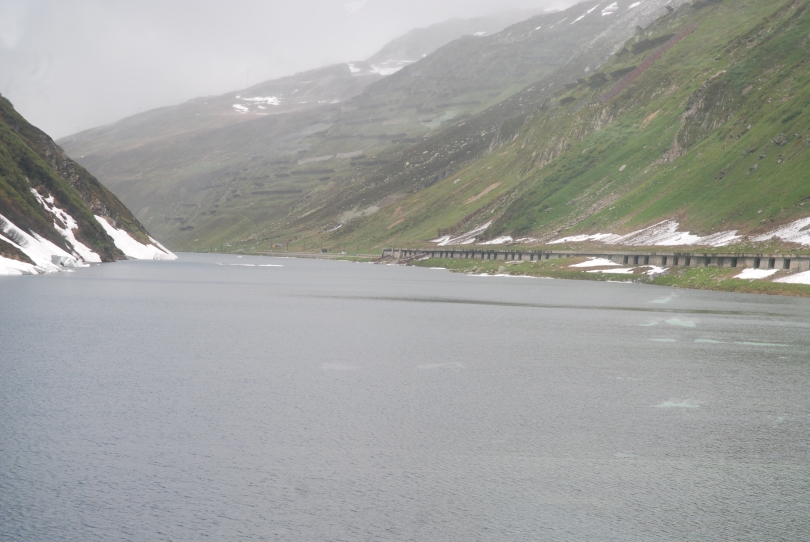 Our last adventures this summer were in Lucerne and at Zoo Zurich.  That’s coming soon!