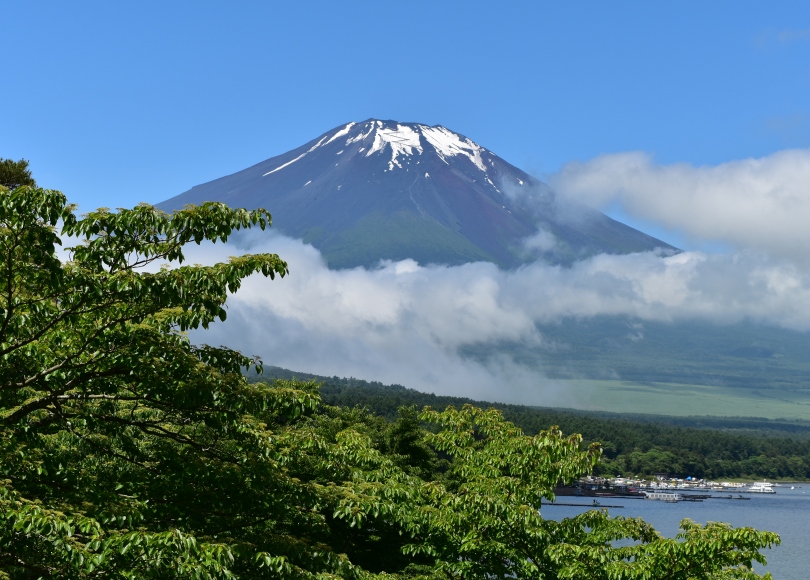 Flights had all been booked and I had started planning the road trip and river cruise that we would be doing in Perth, Australia.  It was winter there and we were looking forward to the cold weather, a much needed respite from the sweltering heat that we were experiencing in Singapore that month of June.

Less than three weeks before our trip, my hubby’s work (luckily) got in the way (he had to go to Tokyo) and so instead of heading to the land Down Under, we found ourselves flying north east, back to the land of the rising sun, Japan.

We were just in the country six months earlier for a winter holiday but the thought of going back still got us excited.  Japan is a beautiful country and each of its 47 prefectures offers wonderful and diverse adventures.

So our 10-day Japan summer story started with a road trip to Mount Fuji.

After arriving late at night at Haneda International Airport, we checked in to the nearby Keikyu Ex Inn.  It is a new three-star hotel that opened its doors in October 2017.  It is right outside the airport.  We had to book  two separate rooms for our family since most rooms are only for double occupancy.  The rooms were basic, clean and small (size which is typical of many Japan hotels). The toilets were compact but had all necessary toilet amenities that we would possibly need for the night.  We did not mind this hotel at all especially since we were staying just for a night.

Moving on to our road trip.  The following morning, we rented a car at Toyota Rent a Car, which was just a three-minute walk from the hotel.  We did not make any prior booking since it was not peak season anyway.   We got ourselves a Toyota Harrier and had to inform the counter that we are taking the car up Japan’s most famous mountain.

Mount Fuji is an active volcano which stands at 3776m high.  The summit can only be reached during summer and this year it was from July 1 to Sept 10.    But we did not intend to climb to the summit, we only wanted to do a road trip to the highest point that our car could take us, and that was at the Mt Fuji Subaru Line 5th Station.  The 5th Station was about 2300m above sea level.

From Tokyo, we took the Chuo Expressway to Yamanashi Prefecture which is where the Subaru Line starts.  We made just one stopover at Fuji-Q Highland, an amusement park popular for thrill-seekers.  The drive from Tokyo to the 5th Station was just about 2.5 to 3 hrs but we wanted to make that quick stop to use the loo and get drinks from the vending machines that Japan is also known for.

One of the things that make Japan so endearing to us is the effort and creativity they put into everything, even in those little tiny soft drink bottles, the multi-flavoured Kitkat or the Hello Kitty-shaped bun.  We all had a fun time tasting the melon flavoured Fanta and the clear Coke, even the medicine-tasting peach cola.

From the 1st Station, the road begun to narrow but it was still concrete, pleasant and had ample signs throughout. The drive up was mostly through lush green trees and there were viewing spots at the different stations, although in our case it was mostly obscured by clouds.  As we entered the mountain, the thick clouds above and surrounding the mountain made us doubt that we will ever see the top of Mt Fuji.  Luckily the weather was erratic and was changing from cloudy to clear to misty and foggy and back to clear again every five or 10 minutes.  There was no dull moment during our drive and we enjoyed every minute of it.

Finally we reached the 5th Station and we were rewarded with a magnificent view.  We could actually see the top of the mountain from where were stood.  It was a bald, seemingly unassuming mountain with just some leftover snow at the top, but it was a sight to behold.  It was elusive and most of the time hiding, but the weather on the mountain was changing all the time and in those minutes that the summit peeked through the clouds, we were staring in awe, marvelling at its close proximity to us.  It really felt close but we knew that from where were were, it would still take a day to two to get to the top.

What we think:  Was it worth renting a car and driving up through the misty mountain?  Definitely!

What we did next:  We went hiking, of course. 🙂  I’ll post about it soon, promise.

Here are some pictures at Haneda and at our overnight accommodation: