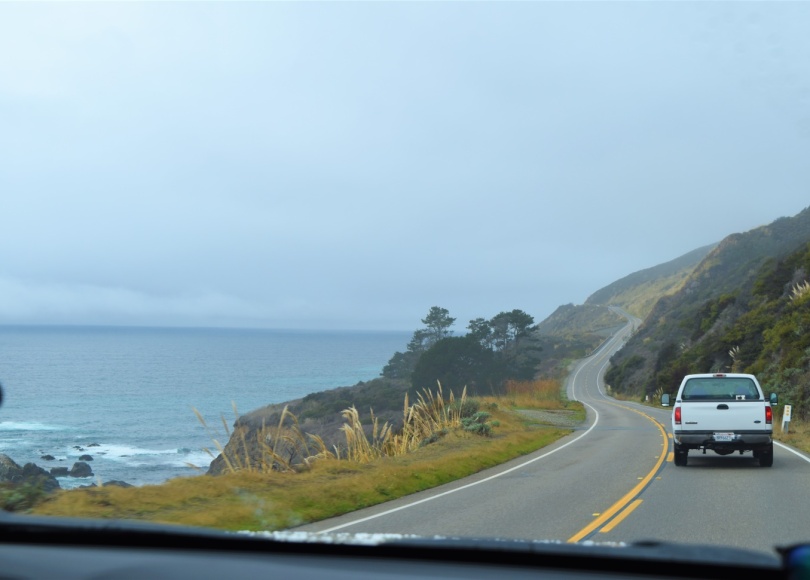 Day 12.  A gloomy sea and an even gloomier sky greeted us from our room’s window.  It was a foggy Monday morning.  The weather forecast was wet but we had to go on, we had a road trip to continue.

Our room at Sand Pebbles Inn in Moonstone Beach had a view of the Pacific Ocean and on a clear sunny day I could imagine how nice it would be like to wake up in the morning and the second thing I’d see is the sea (second because first would be my hubby, Euben, and my kids).  But it was okay.  We’ve learned to accept that sometimes the not so pleasant weather is part of an exciting, unforgettable adventure.

That morning before we left our room, we wrote on the souvenir book to express our appreciation.  As I’ve mentioned in my previous blog, we liked this inn a lot and wished we could stay longer. 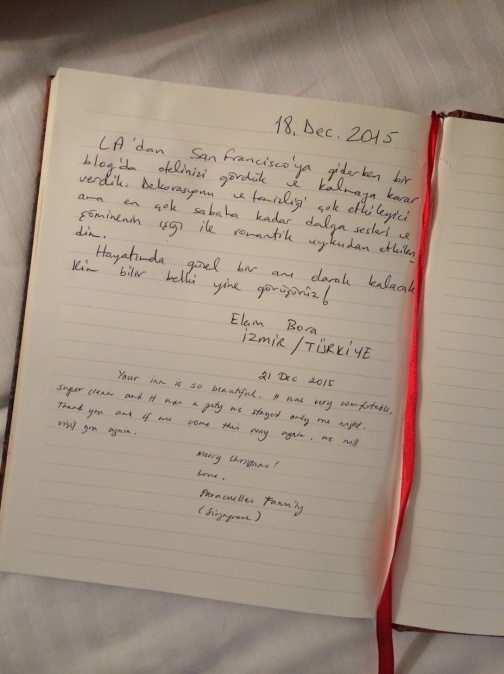 And after a satisfying breakfast that came with the lodging, we were back on HWY 1 aiming to reach San Francisco by nightfall.

We drove less than 4 miles to our unintended but beautiful first stop in search of the Piedras Blancas Elephant Seal Rookery.

Just a few meters from where Benjamin and I stood was an access way to the shore.  Garmin said we would find seals there. 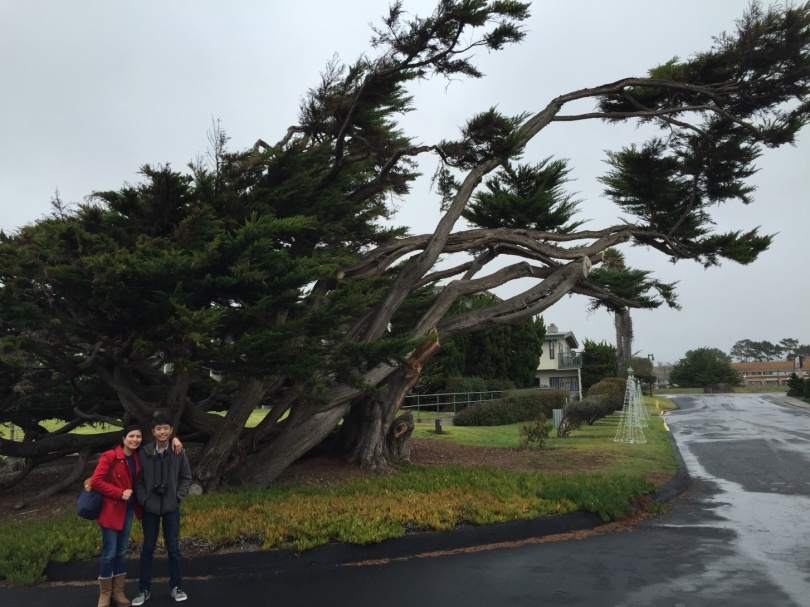 There were no seals on the beach but there were surfers instead!  Brave and daring souls, unfazed by the raging ocean.  In the picture, Benjamin was pointing at their direction. 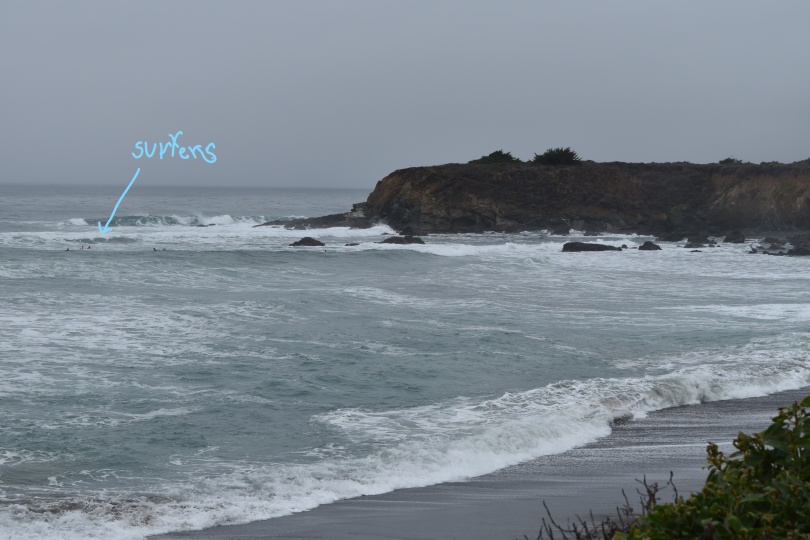 We explored the shore for 45 minutes.  It was drizzling and cold, but like the surfers, we were undaunted. 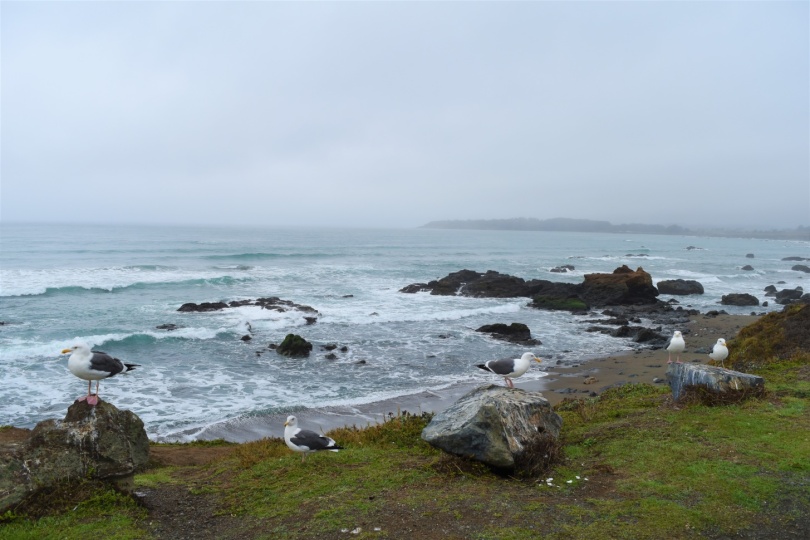 We got back to driving after Benjamin and Joaquin have said bye-bye to these Pacific gulls, and it has only been just a few miles when we saw a number of cars and trucks parked along the highway.  Curious, we also parked and followed the other tourists.

There they were.  Huge, lying on shore and looking rather lazy, were dozens of elephant seals. 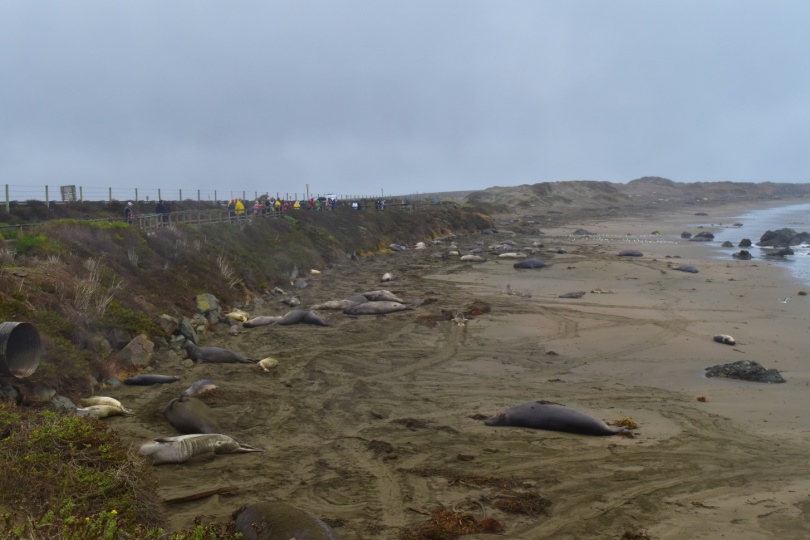 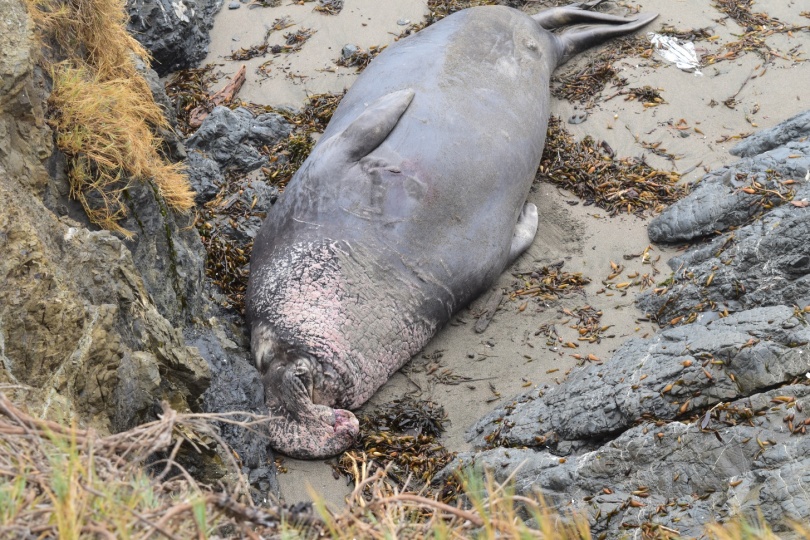 On a sunny day, the view of the Pacific Ocean would be spectacular.  On foggy and overcast sky like that day, it looked mysterious. 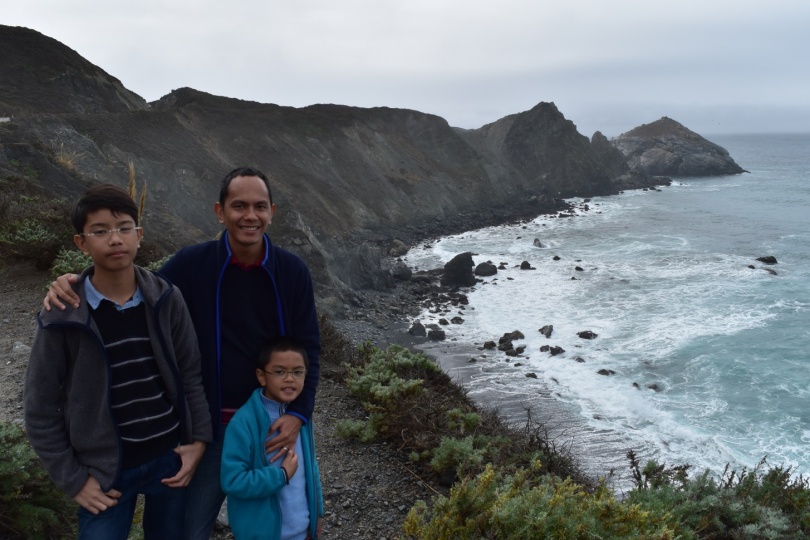 There were a lot of seagulls and other birds out there along with others tourists – road trippers like us. 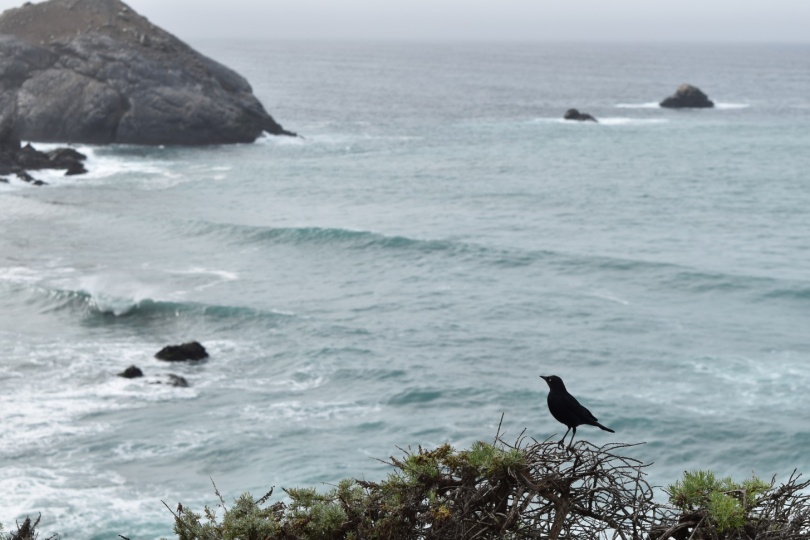 Back in the car, the roads that hugged the mountains started to narrow.  Along the ocean cliffs, they were dreadful to drive on, especially on a foggy day like that day when visibility was low and we couldn’t see beyond the cliffs but were certain that below them was already the deep, deep ocean. 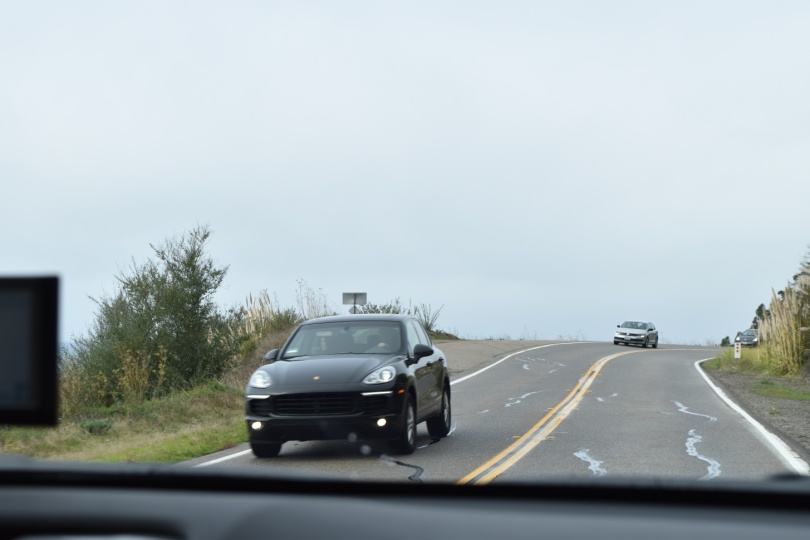 The good thing about being on our side of the road, i.e., driving from LA to San Francisco, was that we were on the side close to the mountain and not beside the cliff.  But the scary bit was that every few miles we could see “Caution! Falling Rocks” signs and at one point we actually saw small rocks and soil falling down. 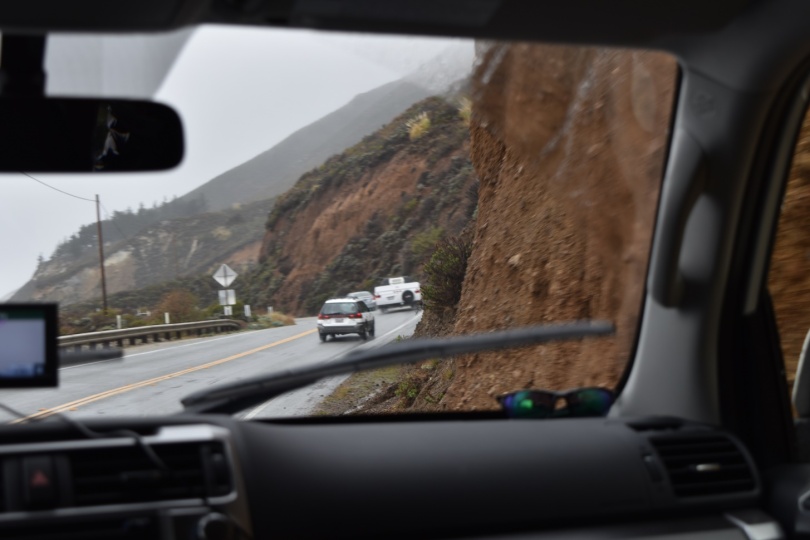 I could not remember the name of the small souvenir shop anymore, but we stopped there to use the toilets, buy more chewing gums, and rest our dizzy heads and the legs of our skillful driver who goes by the name, ‘Daddy’.

Zig-zagging for several miles through a dense fog even at 20 mph was dizzying and actually very very scary. 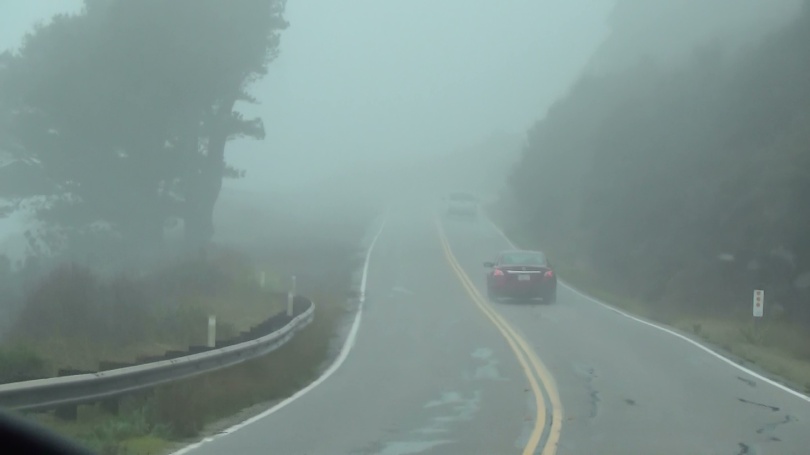 And so whenever we would come out of the thick fog and see a bit of the coast, we would breathe a sigh of relief. 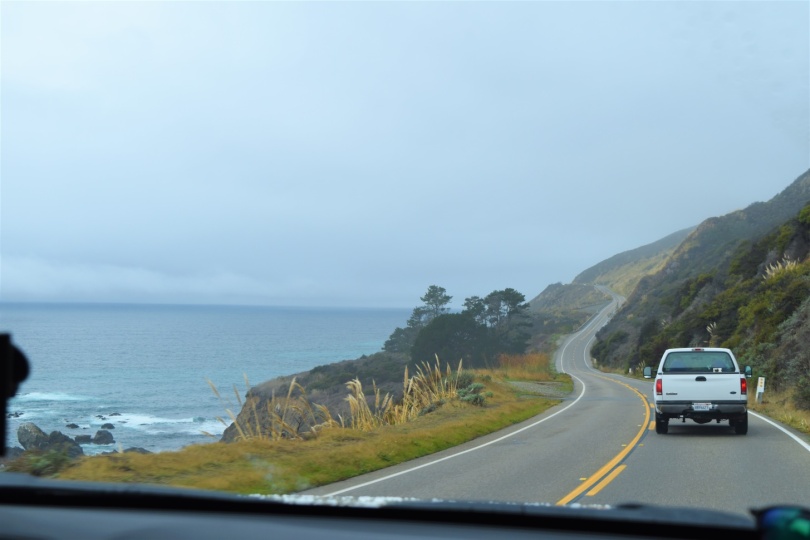 But bright moments like that were scarce and it was pretty dark when we approached what was supposed to be a photo stop – the Bixby Creek Bridge.

Bixby Creek Bridge, also called Bixby Bridge, is considered to be one of the most photographed bridges in California.  You can’t miss it along the Big Sur coastline.  The bridge looked beautiful and graceful, and the ocean below it made for a dramatic setting.  I was looking forward to taking a few nice shots from two angles but the drizzle, muddy road and fog made it a really challenging task. 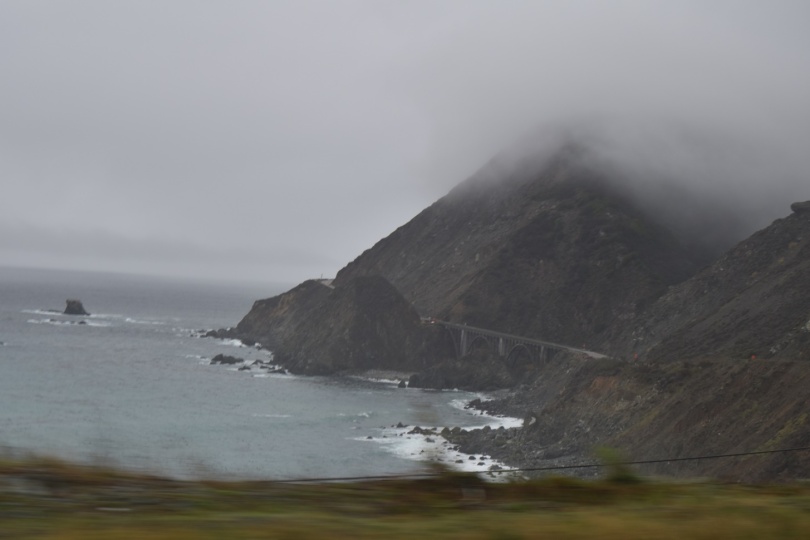 I was hoping to take a few shots after passing the bridge – from beside the road, closest to the ocean cliff where I could take the bridge and the shoreline below it, and another from a dirt road off HWY 1 so I could capture the bridge and the ocean.  Because of the challenging weather, I could only take from the latter and it turned out something like this… 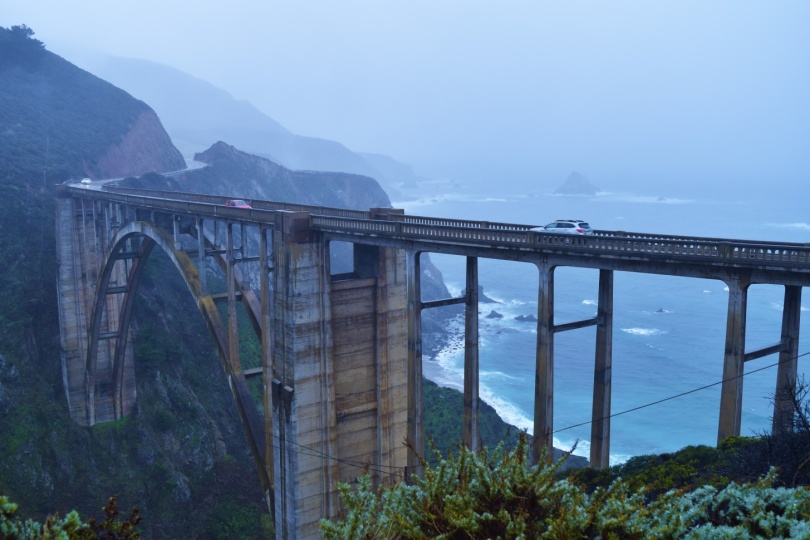 I was still happy with the shot.  I look at this picture again and I feel grateful.  Because at the edge of the cliff, just behind those bushes with small white flowers, was me, capturing shot and enjoying the moment  – I remember staring at the view in front of me, looking up feeling the drops of rain on my face, and looking behind me smiling and giving a thumbs-up to my kids and Euben who were probably thinking… “That is one silly mommy!” *wink*

Just 18 miles (29km) further north was Monterey.  We were supposed to go through the 17 Mile Drive route but since it was raining we probably would not see much of the coast anyway, so we just drove straight to Monterey using the shortest route available. 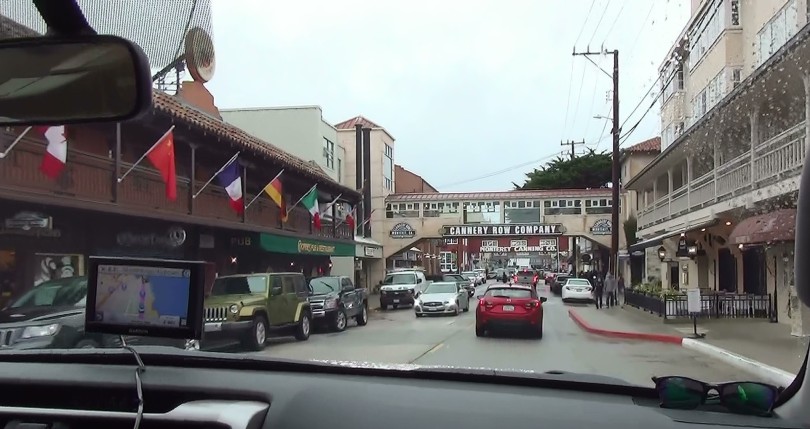 We also abandoned our plan to visit the Monterey Bay Aquarium since it was getting late (the fog on HWY1 easily doubled our driving time) and we just decided on having an unhurried meal instead.  Despite Carl’s Jr being a fast food restaurant, we thoroughly enjoyed our burgers and burrito that moment.  I don’t know what it is about the rain, but is always seems to make food tastes better. 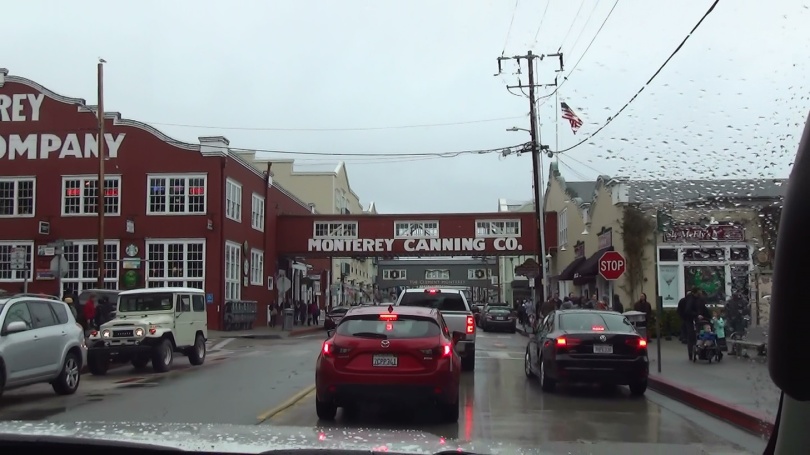 This is Cannery Row, a busy street in Monterey which used to be a sardine-canning district.  But because of the rather uncooperative weather, we could not explore the place properly. 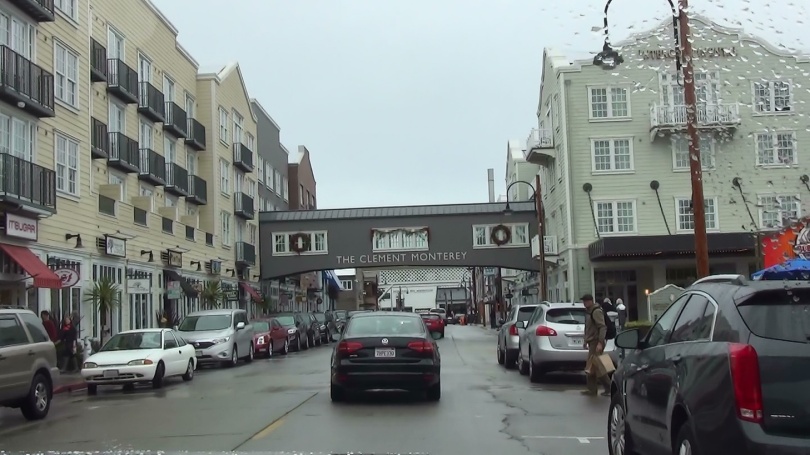 We still had 111 miles (178km) to drive and there was no sign that the sun was gonna show up, so we hit the road again for that last stop on this leg of our road trip – San Francisco!

I looked at several possible hotels in San Francisco and decided on Residence Inn Marriot at Oyster Point, the one near the airport.  It sounded far but it wasn’t really. It was just a 20-minute drive to downtown San Francisco.  We only intended to stay one night at Residence Inn because after checking out the Golden Gate Bridge the following morning, we would be driving further north to visit Euben’s relatives at Sacramento and after that to Squaw Valley at Lake Tahoe.  And when we go back to San Francisco, Residence Inn would be a good base before we depart for Singapore, not to mention that it’s half the price of similar accommodations downtown.

We arrived at Residence Inn past 7pm.  It was raining and the kids just wanted to rest in the room so instead of looking for dinner around the area, we decided to just have our reliable, all-time winter dinner combo in the comfort of our room. 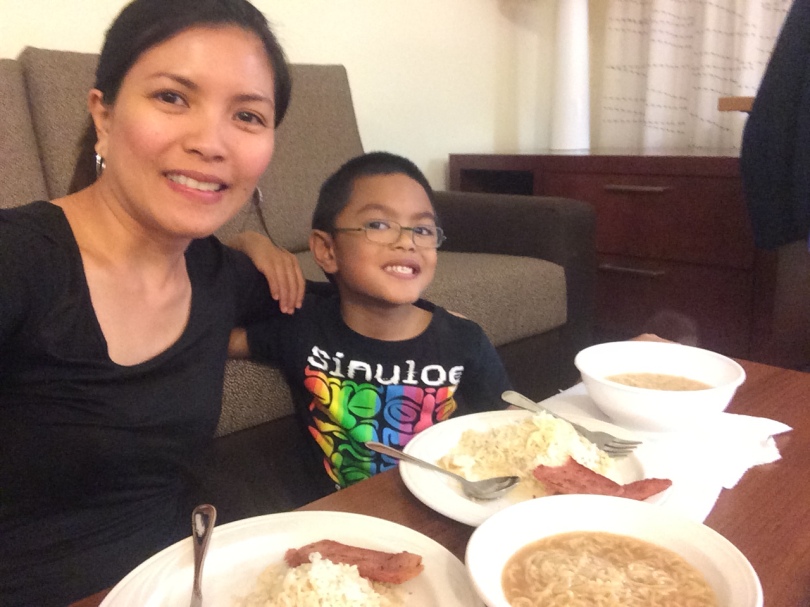 There was a dining set near the kitchen, but who’d want to sit there when you can stretch your legs comfortably on the carpet at the living area while devouring Nissin sesame noodles and Spam, and chatting about our epic road trip over the last two days…

The following  day was another rainy day, but it was okay we found something to do indoors – in Livermore!