Day 10.  According to our itinerary, we should be visiting the Getty Centre in the morning and walking around Rodeo Drive in the afternoon.  The weather forecast for LA that day was raining and so it was good that we made other plans instead.  My high school BFF, I call her Rich, and her family were going out of town that Saturday and invited us to the Ronald Reagan Presidential Library & Museum in Simi Valley.  My family likes weekends out of town and we enjoy museums too so we agreed right away!  But also, it would give me more time to spend with Rich.  So the plan was set – Ronald Reagan Presidential Library in the morning and, if we have time, Getty Centre in the afternoon.

Simi Valley was just 39.5mi (63.5 km) away from Hollywood Blvd.   The drive was fantastic.  The roads were wide and the views were captivating.  For people like us who live in the city, seeing mountains and rolling hills already was a great treat.

The location of this museum was quite unique, different from the other museums we have visited.  It was perched on a mountain with an extensive view of the surrounding hills and valleys.

When we reached the parking lot of the museum that morning, we were greeted by this landscape.  No trees nor flowers, just grass and dry soil covering the hills but we found it fascinating just the same. 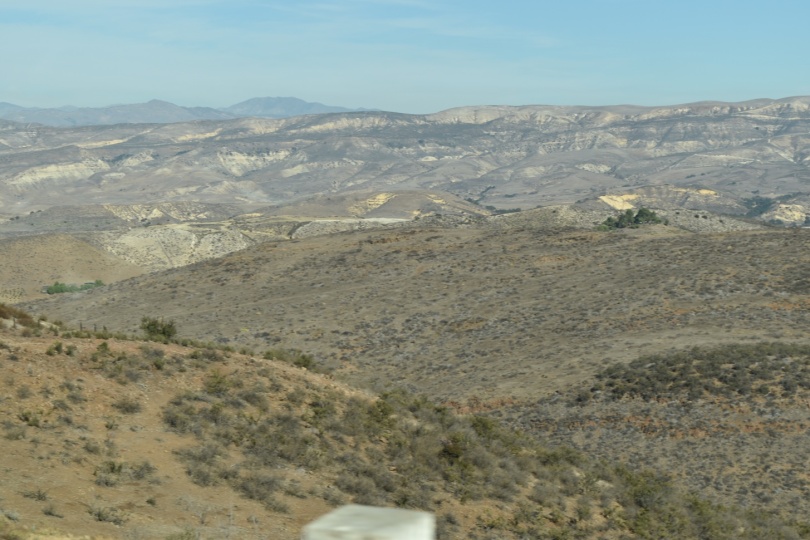 The Ronald Reagan Presidential Library & Museum houses presidential records during the administration of President Reagan.  It not only holds documents, pictures and artefacts, but it also has on exhibit the Airforce One and the presidential helicopter that Reagan used during his time at the White House.

The admission for adults was $21 and $10 for kids.  There are tours that you can join and which are already included in the admission fee.  We joined the first tour that morning which the boys found informative.  As for me, I was rather busy chatting with my friend throughout the tour.

According to Joaquin, Reagan was shot in an assassination attempt just two months after he was sworn in as president of the United States of America.  Joaquin said he was shot just a few inches away from his heart.  The attacker was later on found not guilty by reason of insanity.   Apparently, he shot Reagan to impress Jodi Foster (What?!) whom he had an obsession with.

Another thing that impressed me about the museum was the bright, open space brought about by the glass windows which extended from the floor to the ceiling.  From the inside, and on a sunny day, one could see the rolling hills and valleys which seemed like an extension of the museum. 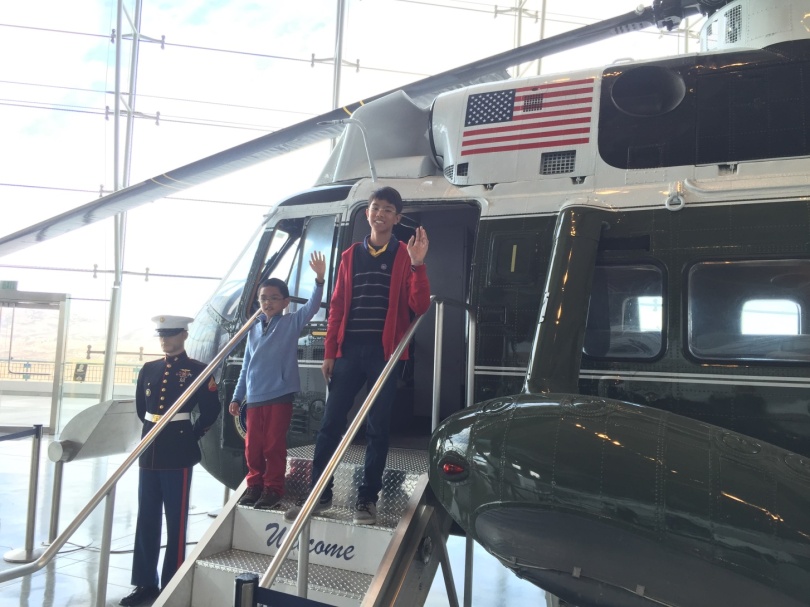 I haven’t seen or spoken to Rich in more than a decade but chatting with her that day felt like we’ve parted just a week ago.  It’s was like the old times, and of course, we talked about the old times – high school.  Rich was carrying with her some old photographs which brought back a lot of memories for both of us.   We talked about how we didn’t have many friends back then, but having each other, and Len, as best friends, was more than enough to make high school a great experience.

So, here are the pictures! That’s us – Len, Rich and me.  Don’t be fooled by our demure pose here.  These Charlie’s Angels had rough adventures in the sea, in the forest and even at the school backyard. 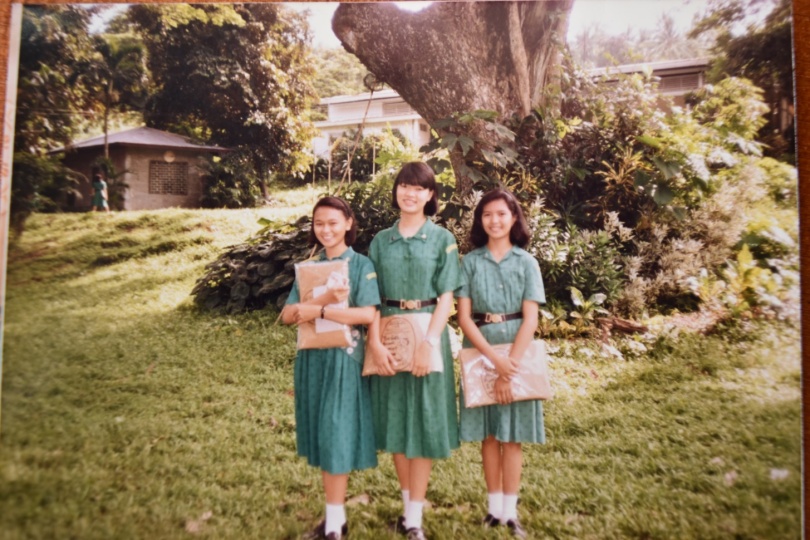 The next one was Len and Rich with our science teacher, Mrs. Alteza, and Pots and Arnold.  Pots lives in LA with her family.  We met up with them in Disneyland and Universal Walk earlier.  It was super nice to see her again after so many years.

This one was probably taken before we took off to one of our Girl Scout camping trips.   Oooh look at those high-waist jeans.  I was quite sure they were fashionable at that time.

And this was taken during our survival camp where I almost lost my front tooth setting up that yellow tent. 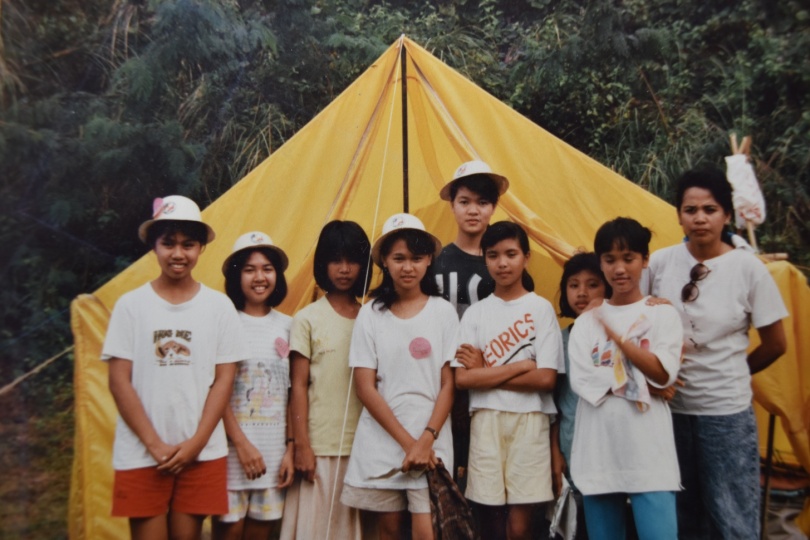 Hang on, before I end my trip down the memory lane, let me first show you our glamour shot taken during our Junior-Senior Prom.  Remember ‘King and Queen of Hearts’ and ‘Got to Believe in Magic‘?  How about your first dance?  Ah wonderful, isn’t it, to able to reminisce about all these…

Okay, so back in LA, we visited the Getty Centre.  Admission was free and for a token amount we borrowed audio guides.  The museum, which houses some of the finest art in the world, sits on a hill overlooking the city.  The carpark was quite a distance and was at the bottom of the hill.  Walking to the museum was an option was but it was raining that time so we took the tram.

Exterior of the museum

Our time in Getty was quite limited and so we targeted mostly the paintings of Vincent van Gogh and Claude Monet, and a few sculptures.

There were hundreds more of these beautiful paintings but we did not have the whole day to see the entire collection, unfortunately.

Benjamin asked me to take down these next two pictures (he thought they’re obscene) but I told him that they are quite necessary to include to show that apart from paintings, Getty also has an impressive collection of old sculptures.

Joaquin said the sculptures in Getty looked like the ones in Paris (Louvre). “They’re also naked!”  Well I can’t argue with that. 🙂 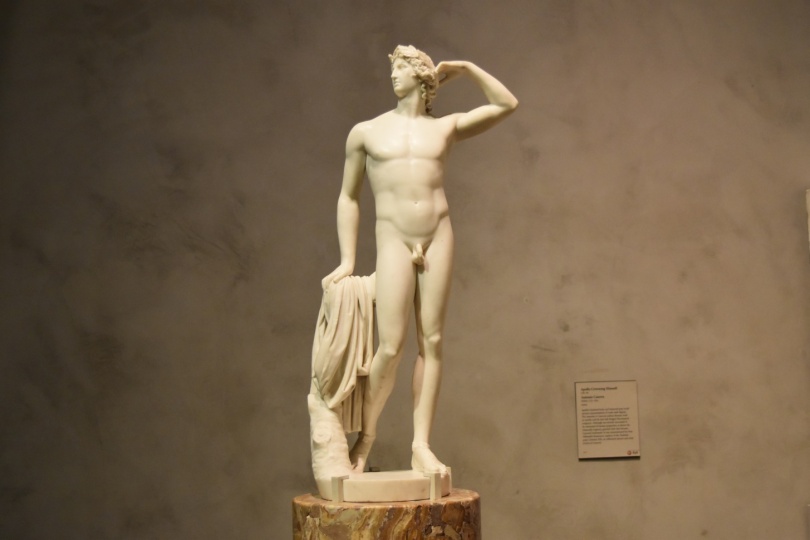 At sunset we headed towards the area around Beverly Hills.  We drove by Rodeo Drive but it was still pouring hard so we decided to just go back to the hotel at Magic Castle, raise out feet and watch some early evening shows on TV.  We’ve rested quite enough and we thought that we should have dinner at Hollywood Boulevard, in Hard Rock in particular, on our last night in LA.  It was just a few blocks away from the hotel and so we just braved the chilly LA night and walked to the restaurant.

Cheers! Here’s to the great time we had in LA and to the next adventure – road trip on Pacific Coast Highway 1.

If you like road trips, look out for the next entry!

Looking forward to dining-in @mr.biryanihouse again
Same time last year...
Favourite mee sua dish in Singapore @yankeenoodlehouse
First time eating chicken satay @foodrepublicsg Not bad at all. But it’s the kueh pei tee, yum, that you should try! 😋
Traveling in our own backyard 🚲
I think my brother would drool when he sees this! 😋
‘Wanton in special spicy sauce’ from Ban Mian & Fish Soup @greatworldsingapore foodcourt
First time eating Thosai... I loved it!
Our favourite 😋Ke Kou noodles is still from Nam Kee Handmade JP Pau, @ The Grandstand,Turf Club road.
Run free, my love.
What else is there for kids when you visit during the Australian Open?
What is it about boats and boys, they seem to attract each other.