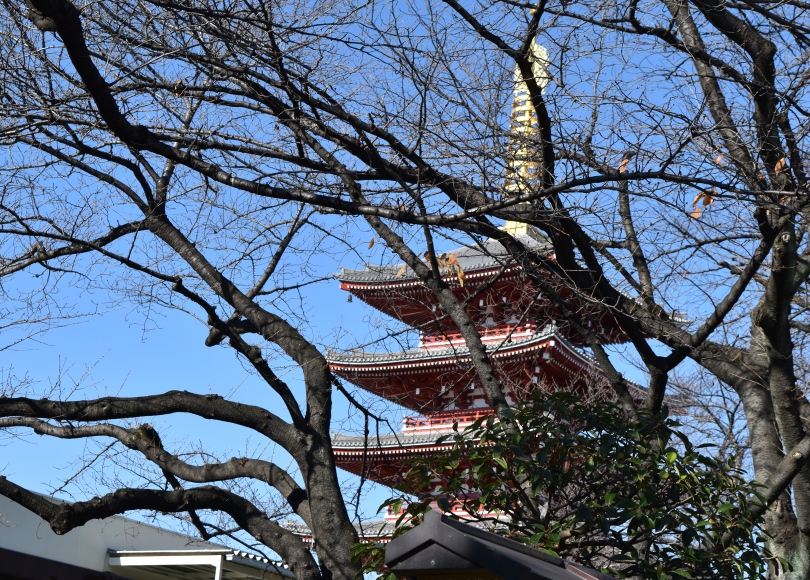 Summer is almost over and I have yet to complete my posts on our winter holiday in Japan.  It took me a long time to get back to writing because life got busy and I got caught up preparing for a follow-up Japan holiday (Japan again, but I’m not complaining.  We love Japan.).

I’ve previously posted some of our most amazing adventures in Hokkaido, and our Disney moments and Samurai encounter in Tokyo.  My last post was on that gloriously bright winter morning when we did the Sumida River cruise in Tokyo.  And so allow me to continue from there…

We got off the boat at Asakusa pier and walked about 15 minutes to Sensoji, Tokyo’s oldest Buddhist temple.  We approached the temple from the Nakamise-dori, a pedestrian street lined with small shops that sell anything from Japanese dolls and hair accessories to shirts and many other souvenir items.  If you plan to visit, do take this route because the walk has that nice ‘old Tokyo’ feel and it leads you through the two gates, Kaminarimon and Hozomon,  the temple gates with massive red lanterns, before reaching the actual temple.  We spent just about two hours in the area. You might need more if you plan to offer prayers.

What we think: It is worth a visit even for non-Buddhist.  It is, after all, Tokyo’s most visited temple.

Now, we were supposed to visit a museum as well that day, but as I’ve said, it was a bright winter day with perfect blue sky, and so we thought it would be a good idea to see the city from above!  We then decided to go to Tokyo SkyTree which has viewing decks as high as 450 meters.  It wasn’t in our itinerary but it didn’t matter, the SkyTee was just across the river from Sensoji temple anyway.  At Sensoji we took the train and in less than 15 minutes we arrived at Tokyo SkyTree Station.

Before going up to the viewing deck, we decided to have lunch at the food court of Tokyo Solamanchi, a mall that is directly connected to the foot of the SkyTree.

SkyTree has two viewing floors.  We went to the Tembo Deck which has the Glass Floor, a café and a restaurant.  We spent about two hours which was enough since it wasn’t big anyway.

What we think: Go there only on a clear day, otherwise, we think there is nothing to do and see.  It wasn’t in our itinerary but it was a sunshiny day, and so we went and we enjoyed our time looking over Japan’s metropolitan capital city.

It was almost dark (4:40pm) when we left the ‘tree’.  The youngest among us, the most excited for the next destination… The Samurai Museum…