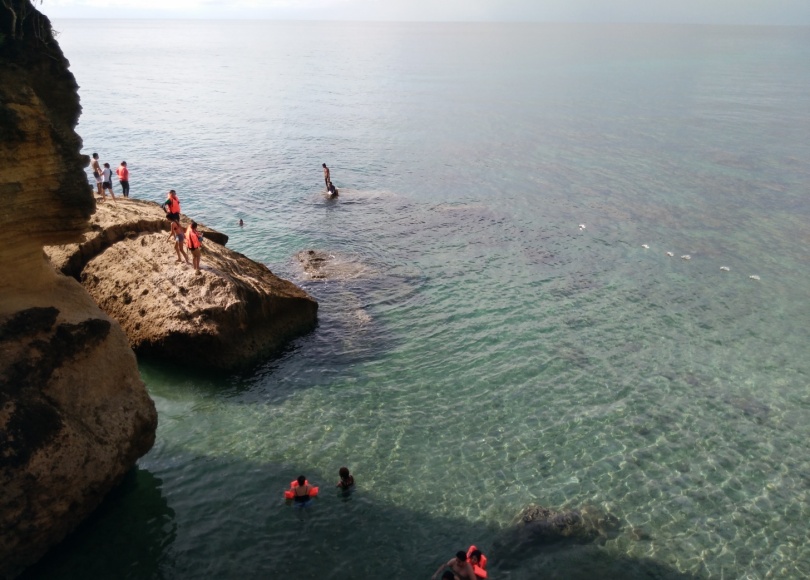 Summer has always been kind to my family!  It has taken us hiking in Zermatt, exploring the rugged landscapes of the Scottish Highlands, and recently, it has brought us face-to face with icebergs in the Tasman Glacier Lake.

But this year, summer took us somewhere closer to our hearts…

In the two weeks that we were in the Philippines, we visited five of its many islands.  We spent hours relaxing on the beach, swimming with fishes and diving with sea turtles.

Let me tell you about my hometown first – Marinduque, the island where I grew up and where my parents still live today.

Marinduque is tiny and remote but otherwise a beautiful island south of Manila.  Life in Marinduque is simple, with coconut farming, fishing, and recently, butterfly farming and tourism, as the main sources of livelihood.

And although the concrete inter-town roads have been completed, much of the towns there still look the same as they did before I left 25 years ago.  That’s not bad; it brings out the heritage of the island.  For people living there, much progress is hoped for.  For me, someone who does not visit too often, I did not mind seeing the same old houses and small shops, the same century-old churches and visibly worn-out municipal halls, and the familiar faces of our neighbours…

Marinduque is often visited by tourists during the Holy Week because of the island’s Moriones Festival, a one-week Catholic event commemorating the suffering and death of Jesus.  The festival was already over when we were in Marinduque last June, but trust me, there is more to do and see on the island besides that.

How did we get to Marinduque from Manila?  Philippine Airlines used to fly to and from Marinduque when I was young but I was told that in the last few years there is almost no air service to the island anymore.  And on our visit, we had to do a 4-hour road trip from Manila to the City of Lucena and from there we boarded the roro ship to Marinduque which took another 3 hours.   There is another option which is to take the public bus then the ferry, do send me a message if you need more info on this.

What did we do in Marinduque?   We went to the beach of course.  Marinduque is gifted with many beaches; some with white sandy shores, some with rocky cliffs. But all are clean and unspoilt.

This is Poktoy White Beach located in the town of Torijos.  It has always been like this – an understated beauty.  But in my opinion, sometimes less is more when it comes beaches and relaxation – less restaurants, less hotels, less shops, less distractions, just nature in all its glory.

On another day, we rented a boat for PHP3,500 (SGD100 or USD68) to take us island hopping.  We were going to Mongpong Island and then to Palad Sand Bar.  It was cloudy with some wind but the boatman said we should be okay.  “The boat has life vests,” he assured us.

From Buyabod Port in the town of Santa Cruz, Mongpong Island was one hour away by motor boat.  We wanted to see this much talked about geological wonder in the island called Ungab Rock Formation.

There isn’t a hotel or proper restaurant there, but if you need bottles of water and some snacks, a small store on the shore sells them.  From the shore I only remember seeing these two pink houses.

It was quite crowded when we arrived but it was fine.  The sea is big, we can share.  (Watch the video above for the drone shot of the beach.) 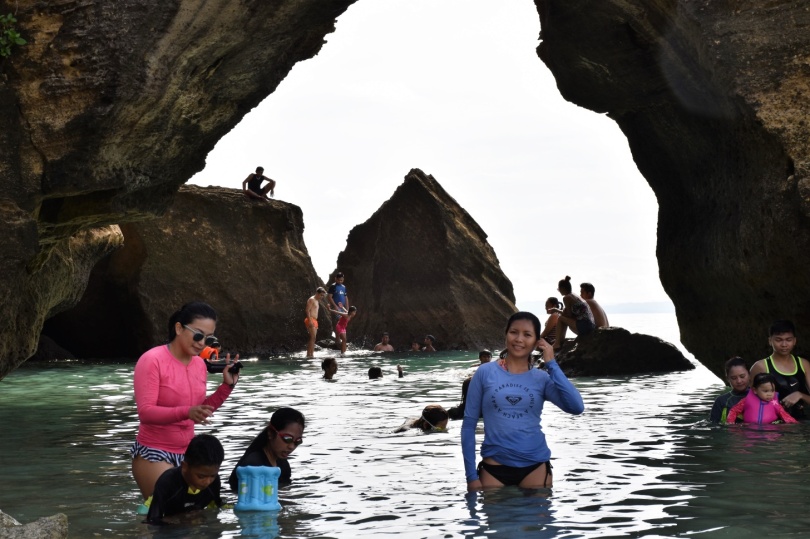 Important tips:   1) Wear reef shoes!  No fine sand here but pebbles, and crushed shells and corals.  2) Swim safe. The water beyond those rocks is deep so take caution.

There was a big rock that visitors have turned into a cliff diving spot.  And Joaquin, being our little brave shark, would not miss the chance to jump, just like what he did in New Zealand two years ago.

The boat took us to Palad Sand Bar next.  It’s 30 minutes or less from Mongpong (and Santa Cruz), and the sand there is extremely white and the water is crystal clear. 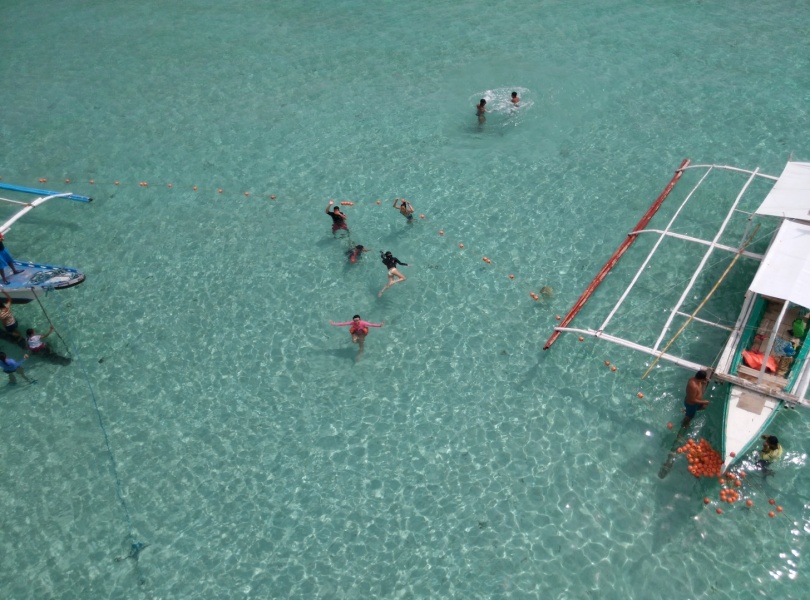 When we went in June, the sand bar was submerged but we were still able to get off the boat because the water was just chest-deep.

It was more like swimming in a massive pool but with sand under our feet.

And during the season when the sand bar is out, like that time when we went in December, it looked like this.

My next blog is in the beach again, but this time, waving at dolphins and swimming with sea turtles.  As I said before, it is an endless summer in the Philippines, and we don’t mind at all.

Look out for the next one…Bohol…