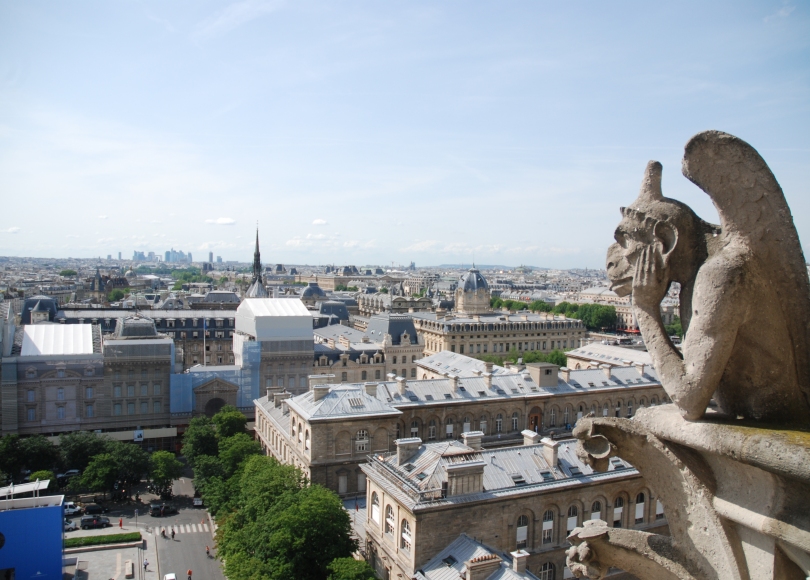 It’s June 17 and today was a special, special day for the kids! They get to ride a high-speed train, their main reason for wanting to go to France. Oh their eyes beamed with excitement as the TGV sped up.  They marveled at how fast it was.  Joaquin was so funny, he couldn’t get the name right; he kept saying ‘TVG’.

After a 4-hr joyride from Zurich, we arrived at Gare de Lyon train station.  The kids were so happy to see so many smart cars (those little city cars) on the busy roads of Paris as our taxi made its way to Fraiser Suites, our accommodation for the week.  We needed an apartment instead of a hotel room so that I can cook for Joaquin.  Our apartment was located in the modern, business district area, a few meters away from the Metro and RER regional trains, and just a few stops to Arc de Triomphe.  That afternoon in Paris, we just chilled and shopped for groceries at a nearby supermarket.

Daddy and I visited La Tour Eiffel ten years ago when all we can afford was a 50-euro a night hotel and only a baguette with strawberry jam and cream cheese for breakfast.

And then we were back and this time with two adorable kids in tow.

After taking lots of pictures, and jumping and running around, the kids were finally hungry.

We walked a few blocks to rue saint-Dominique to have lunch at La Fontaine de Mars.  We had to book a few weeks in advance, not only because it’s quite a popular restaurant (thanks to President Barack Obama and his wife, Michelle), but because we had to make sure that it could cater to our food allergy.

The restaurant was cozy and the chef and restaurant manager were both very nice.  They were waiting for us that day and personally assured us that our food restrictions will be taken cared of.  And guess who else was getting special treatment from the restaurant that time?  Well, Singapore’s deputy minister for education and his delegation! They too had good taste in dining. 🙂 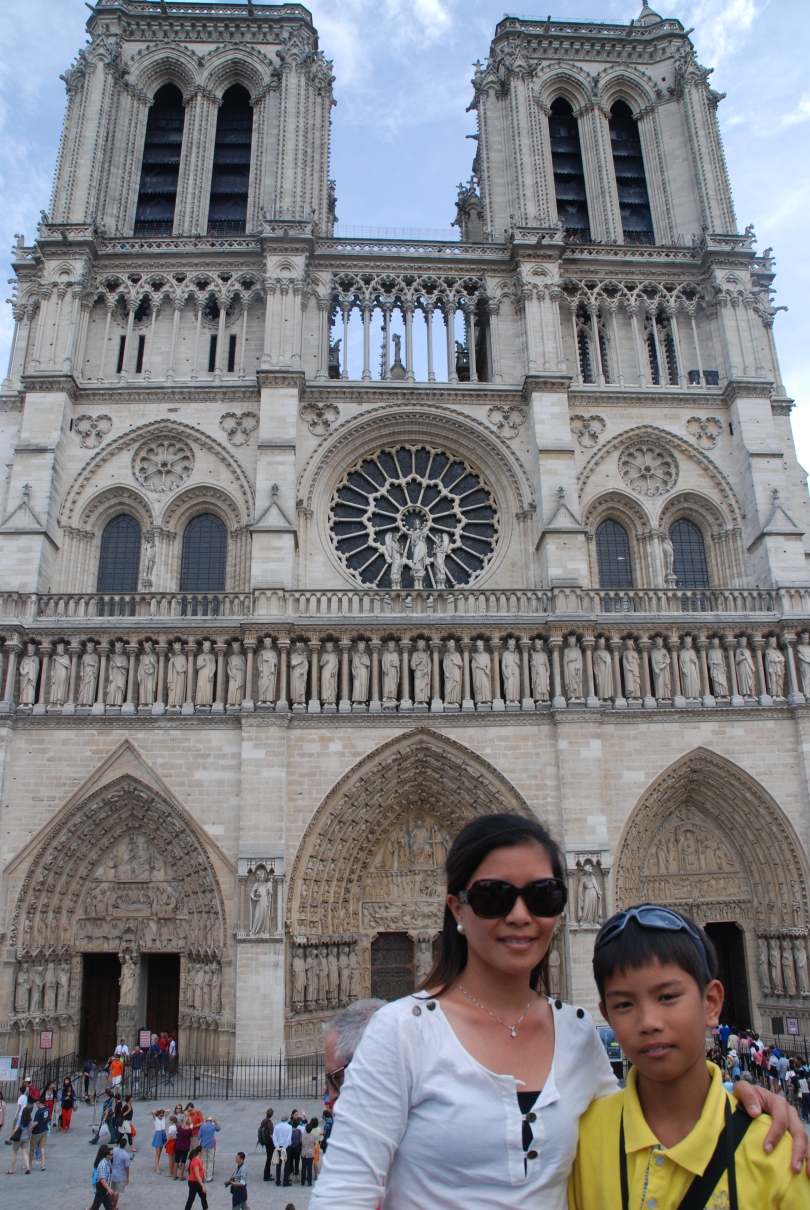 Inside, we said a few prayers, lit up a couple of candles and bought some souvenirs. I got rosaries and pendants. 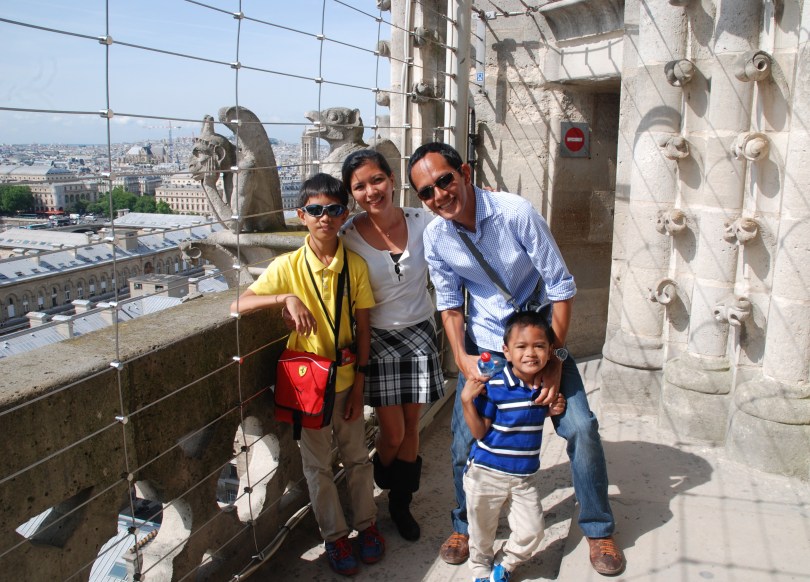 …mainly to visit the gargoyles

…and because the guidebooks say it has an incredible view of La Seine.

I think it’s the bridges and the old buildings along its banks that make River Seine extra special.

We stayed a bit longer on the grounds of Notre Dame because Daddy liked to listen to the street musicians playing there that afternoon and because the boys enjoyed feeding the pigeons.  After that, we headed back to the Eiffel Tower.

Ah, you know a picnic becomes really special when you do it on the grounds of Champs de Mars and with people you love most. Nothing fancy for dinner that sunset, just pure goodness of Pizza la Goumanchi, cans of Coke and a lively summer atmosphere. Just wonderful!

We couldn’t get tickets to go up the tower from the official website even weeks in advance and so we resorted to ordering them from Easy Pass Fat Bike Tours.

The tower was filled with tourists but we didn’t mind. We all had a fun time up there, especially Daddy. Hik! Hik!

This was a gorgeous view from the tower viewing deck.

Cruising at River Seine was in our itinerary that night but the kids said they were already tired and sleepy. The last time Daddy and I were in Paris, we did the Bateaux Parisiens River Seine cruise and I remembered that La Vie en Rose was playing the entire time; it sounded really romantic. The kids promised to do the cruise on their next visit.

It was day three in France when we went to Chateau de Versailles. The queue to enter the palace was long but the pigeons kept the boys entertained. 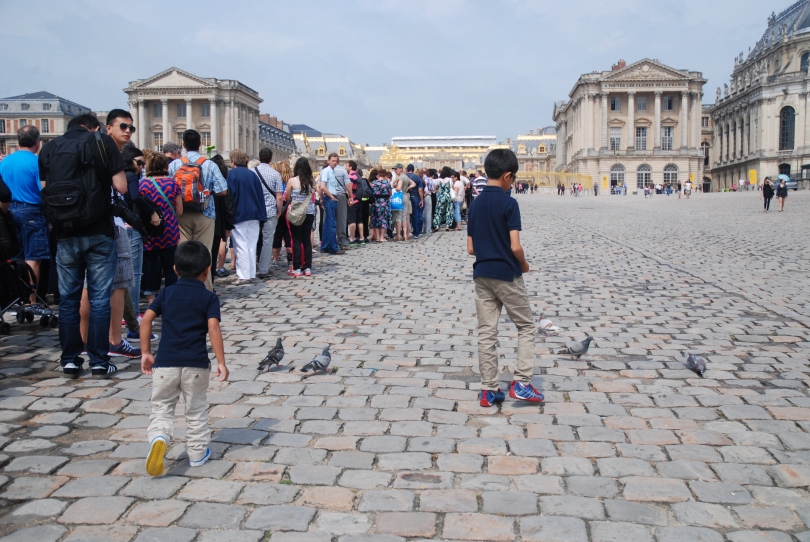 When Daddy and I visited Versailles ten winters ago, we thought it was lovely especially the gardens which were covered in snow that time. Unfortunately this time around, our family didn’t enjoy the palace as much, maybe because there were restorations and renovations going on or maybe because there were just too many people that it was difficult to properly see the exhibits. 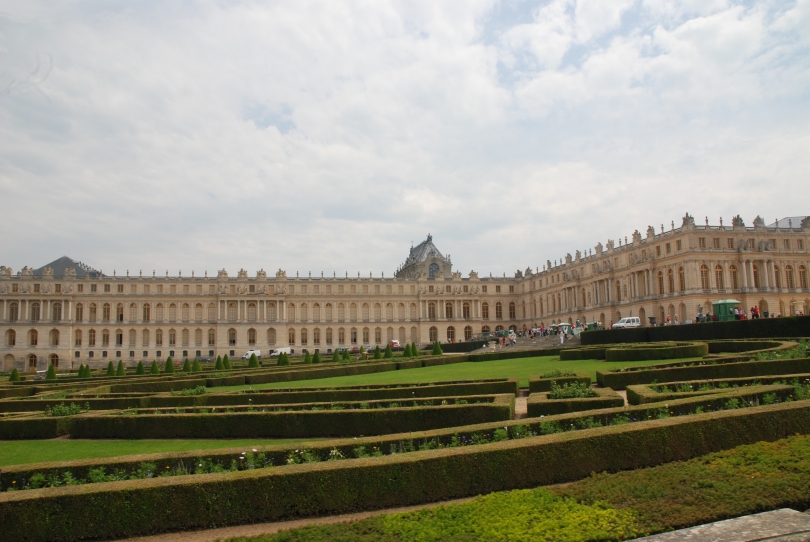 Anyway, after seeing just a few rooms, we decided we were wasting precious Paris time, but we didn’t want to just leave and so we thought of riding the minitrain which would take us around The Grand Trianon.  We imagined Queen Marie Antoinette walking around her trimmed gardens… drunk and only half-awake.

Before we left the palace, Benjamin found this statue and quickly commented, “Oh so gross mummy!”

After a few wrong turns on the streets of Versailles trying to find the train station, we came across this little café called Creperie le Dolmen which sells all sorts of crepe.  That was actually our first crepe in France and we liked it!

But the day wasn’t over yet. We traveled back to Paris and visited Musee de Louvre.The kids loved the museum. They wanted to see every large painting and statue.  How we wished we had spent the entire day here instead.

At this point Benjamin could no longer keep to himself his thoughts on Louvre.

He was grinning and at the same time flinching – giggling! He said, “The museum and the paintings were grand and impressive, but statues are obscene!” And then he asked why every statue was either half-naked or really very naked…

But Joaquin didn’t care. He said he was a statue. Joaquin’s pose made us all laugh. 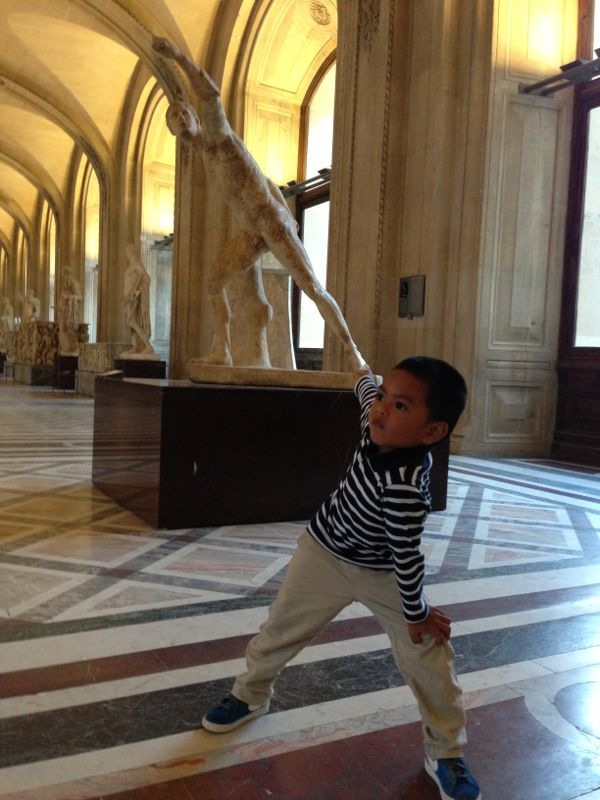 Dinner tonight was at Café Marly which was located in one of the wings of the Louvre. 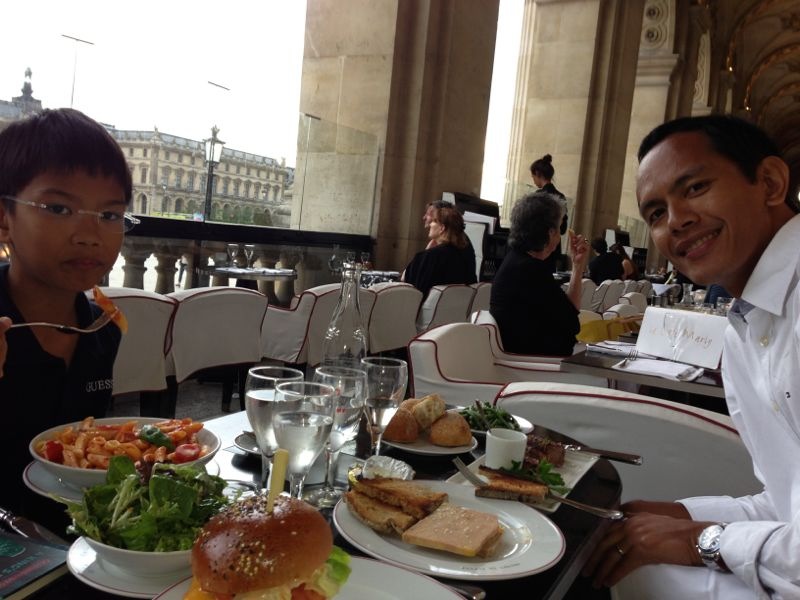 We reserved a table at the balcony which had the best view. Great for people watching, and even better, for admiring the contrast between the modern glass pyramid and the old facade of the museum.  We were lucky Cafe Marly accepted our food restrictions when we booked a few weeks back.  It turned out to be my favourite spot during our Paris trip!

Well, that was the first part of our week in Paris.  The next one was in the happiest place on earth, so look out for that!