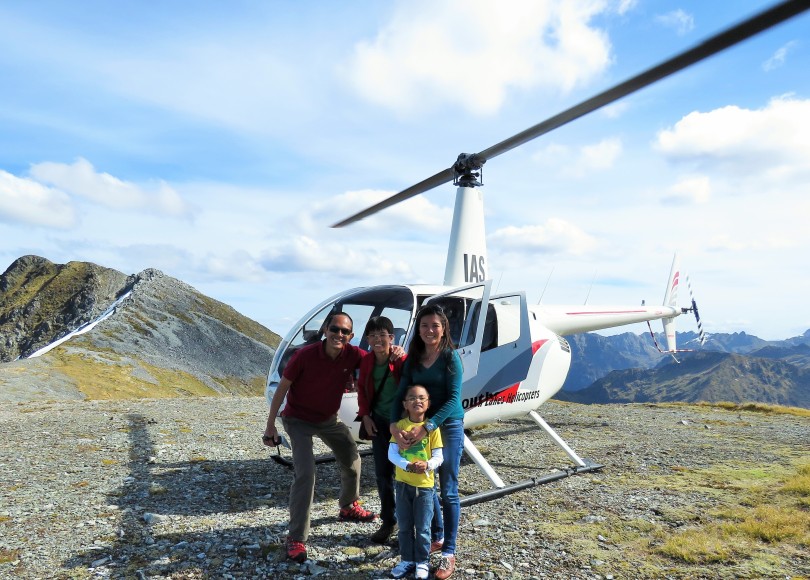 Days 8 and 9 – From Queenstown we drove 178km south to Te Anau, our base for our Fiordland adventure. Te Anau was lovely. It had everything we needed for this leg of our holiday – tranquil lakes, mysterious mountains and glorious sunsets. It also had good restaurants and fabulous motels.

We stayed two nights at Radfords Lakeside Motel, which came with this lovely view. 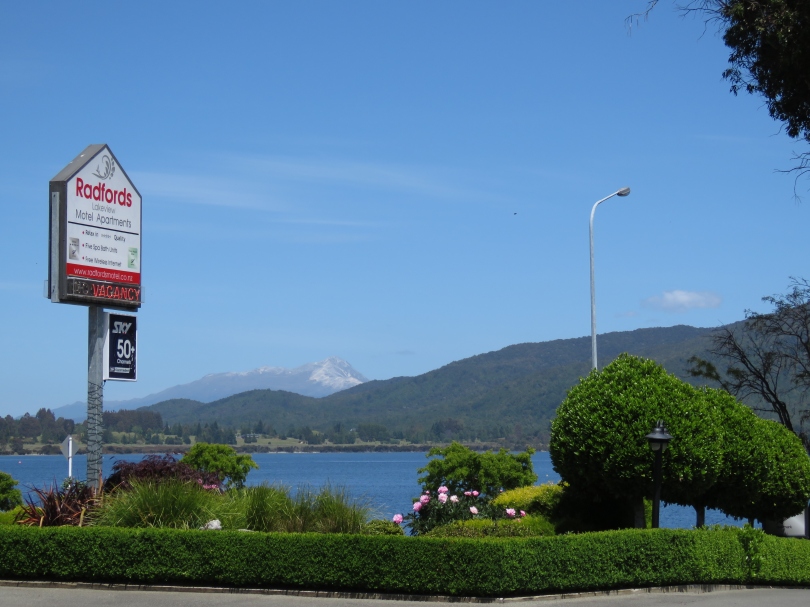 At about 2pm, after having lunch at Sandfly Café, we joined Real Journeys for our Glow Worms Cave Tour.  It started with a 25-minute cruise in Lake Te Anau aboard Luminosa. 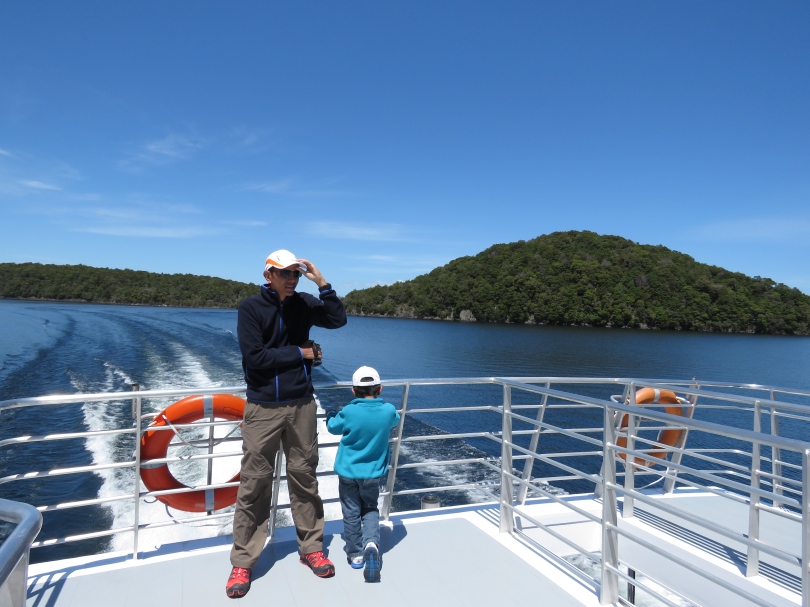 Once we reached the cave, cameras were no longer allowed, not even those without flash. A teeny-tiny noise will disturb the glow worms and they would stop glowing. The entrance to the cave was low and Mummy hit her head twice. Ouch! Daddy felt claustrophobic and he couldn’t breathe during the first few minutes. And the two boys? They were perfect! Enjoying the mystery of the cold, wet cave. It was their first cave adventure.

Inside the cave, we transferred to a small boat which moved slowly, silently, into the pitch dark grotto. It was a magical sight – like a dark sky filled with stars, but stars that were just within our reach…

It looked something like this, only a lot more mesmerizing.

Our next adventure was unplanned and unexpected!  The weather was perfect and so we went for it. For the first time in our lives we rode a helicopter! 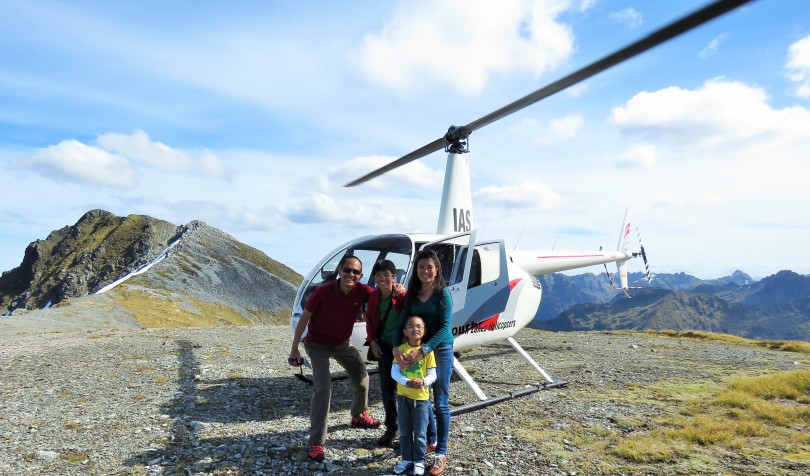 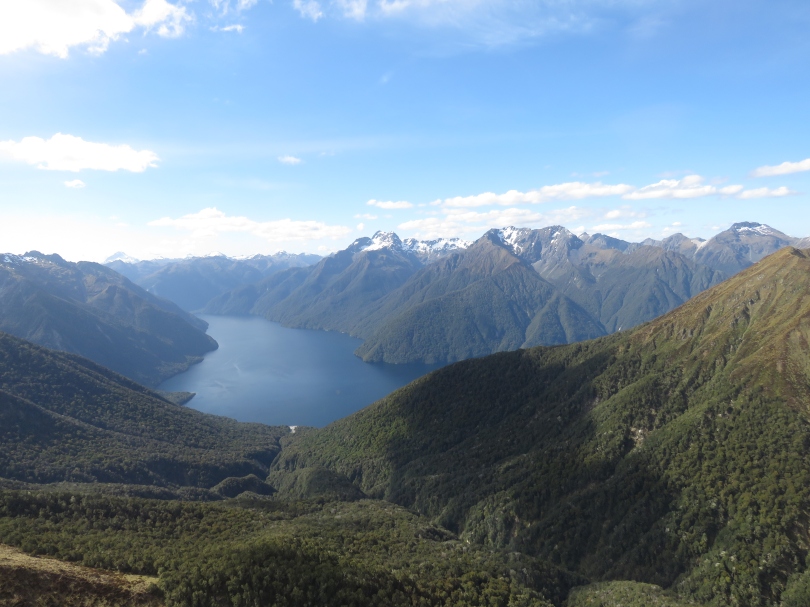 But the best and most unexpected part was the mountain landing. The helicopter landed by a tarn (small mountain lake) and from where we stood, we could see everything. It felt like we were on top of the world! 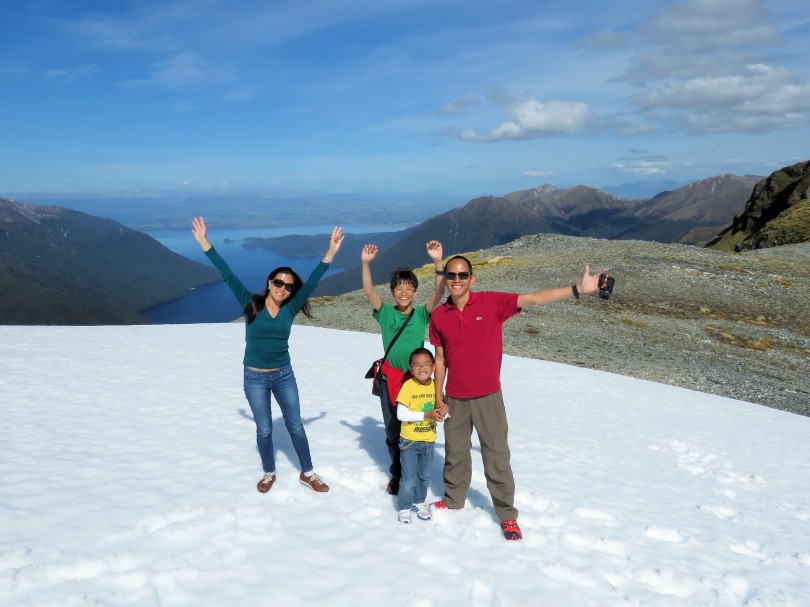 The snow was still soft and untouched, although probably it had already been there since the last winter. Naturally the boys took the chance to throw snowballs at each other.  In paradise again! 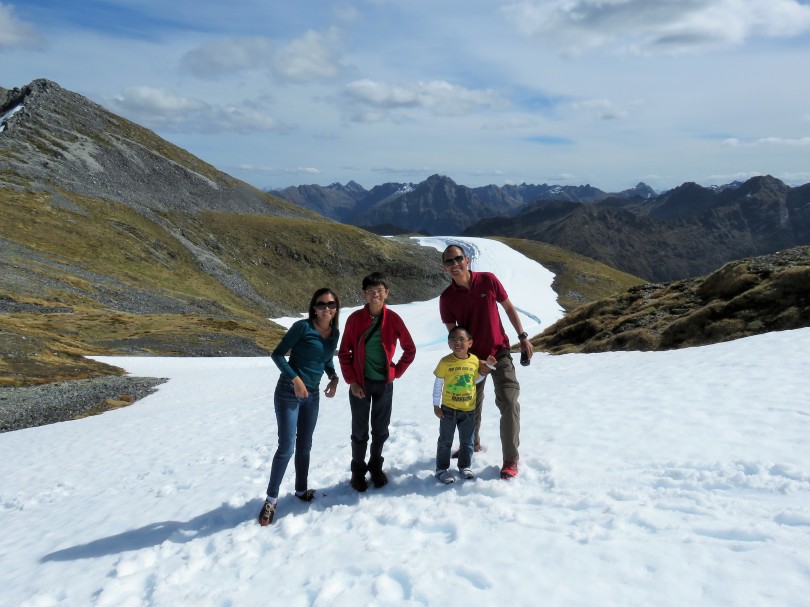 As we flew over the stunning lakes and untamed mountains of Te Anau, we couldn’t help but say out loud how grateful we were for this phenomenal day and for all our wonderful adventures. 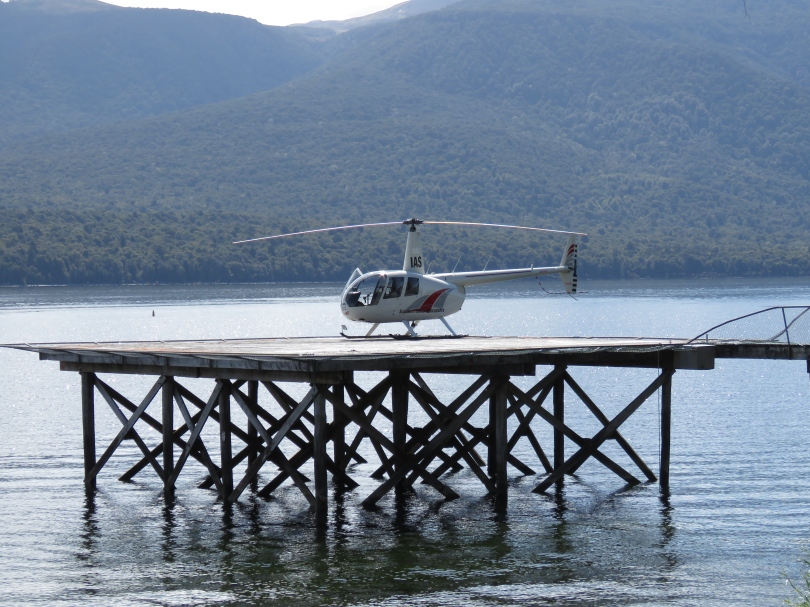 Back in town, we walked around the lake, and Mum and Dad settled on a bench and enjoyed the view of the kids feeding birds and ducks, and waited for the sun to set behind the mountains. 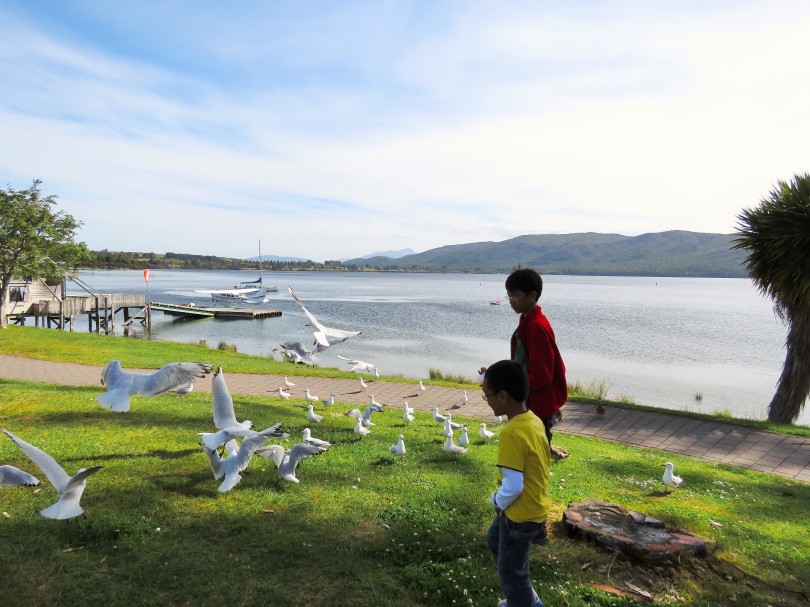 Day 2 in Te Anau, we joined the small group tour of Trips & Tramps to Milford Sound.  Milford Sound was about 2hrs west of Te Anau.  The first stop in our day tour was at Mirror Lake to take pictures like this one. 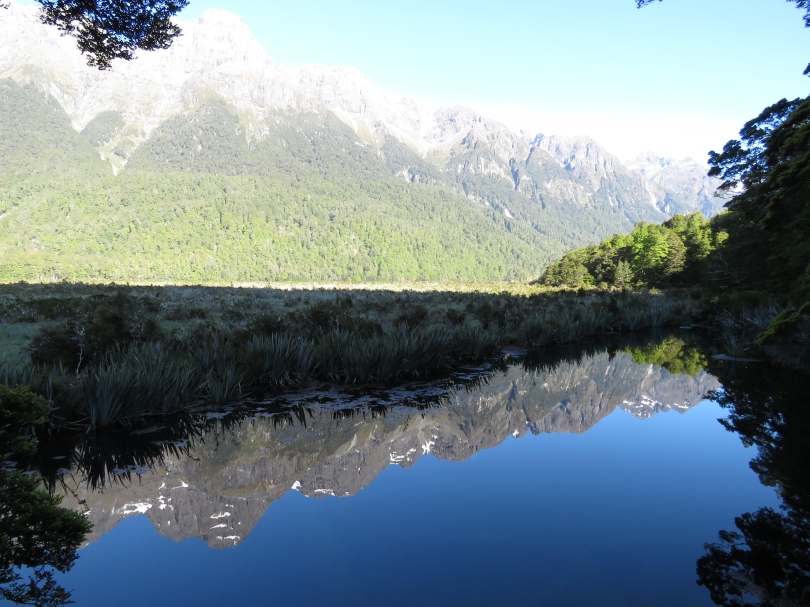 The second stop was at Milford Sound where we joined a 2-hr cruise.  The cruise gave us the best view of the fjord and of Mitre Peak (a mountain in Milford which rises almost vertically to 5,560 ft from the water), although it quickly turned cloudy and so it wasn’t the best time to take nice pictures. 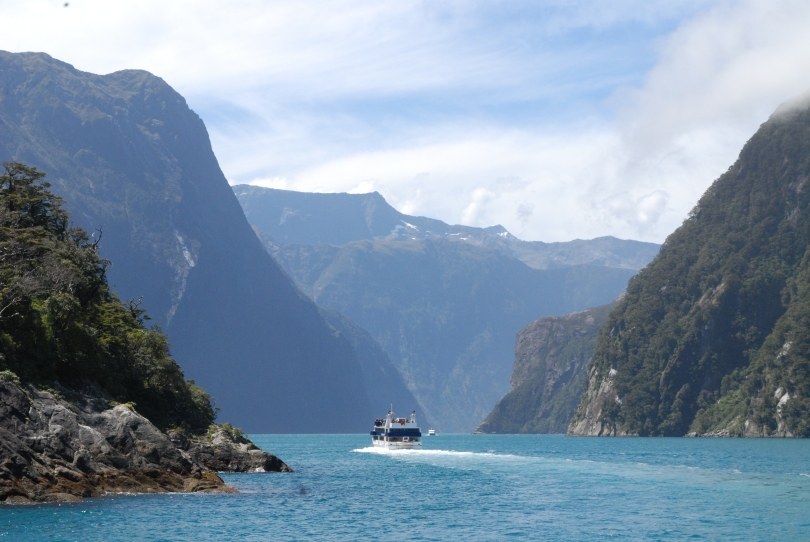 We saw some seals relaxing in the sun, a nice waterfall and a beautiful rainbow.  Yes all in one morning!  How nice was that?! 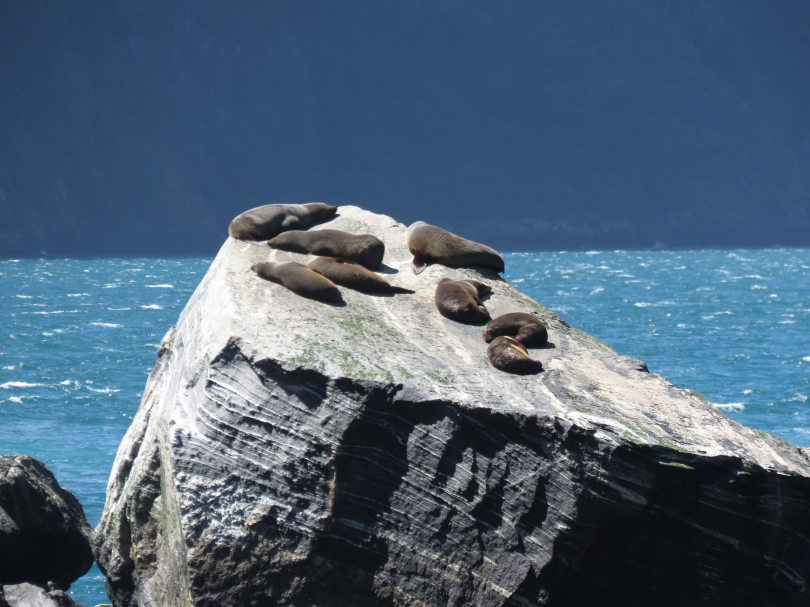 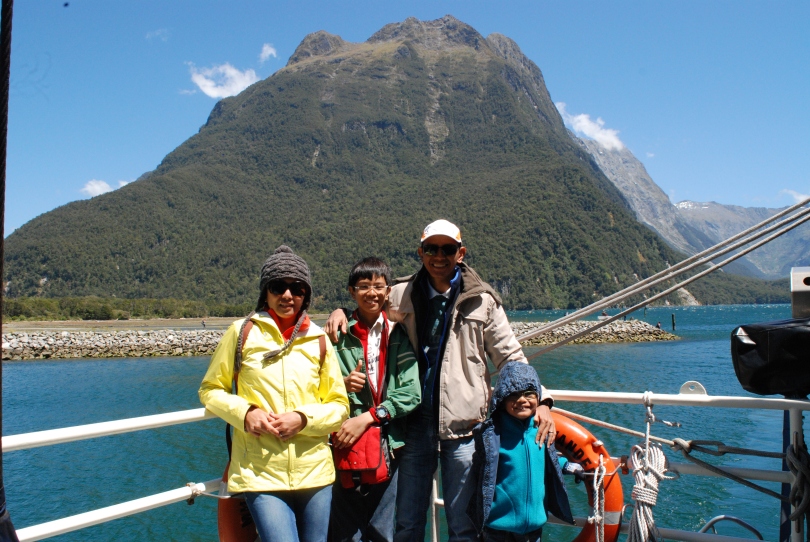 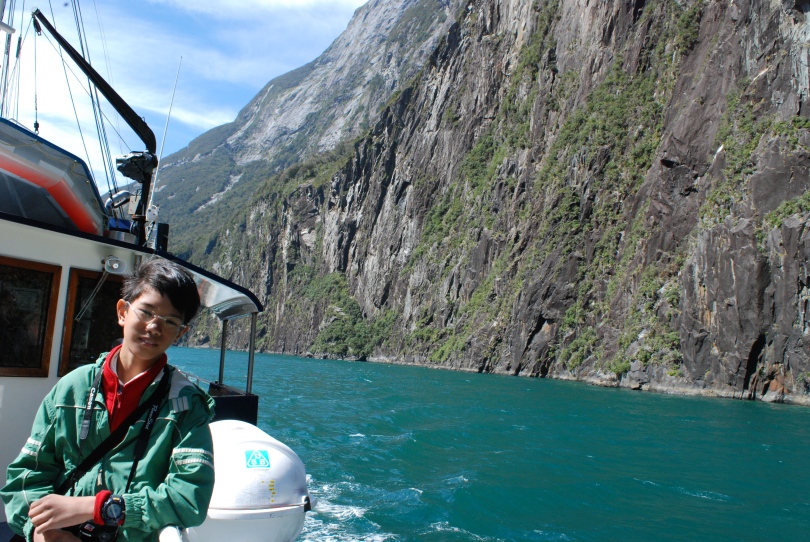 After the cruise, our tour guide Stephen, took us tramping. The first one was near Hommer Tunnel.   Joaquin loved counting the several mini-waterfalls from melted snow while Mum enjoyed taking shots of the big white mountain daisies and other wild alpine flowers. 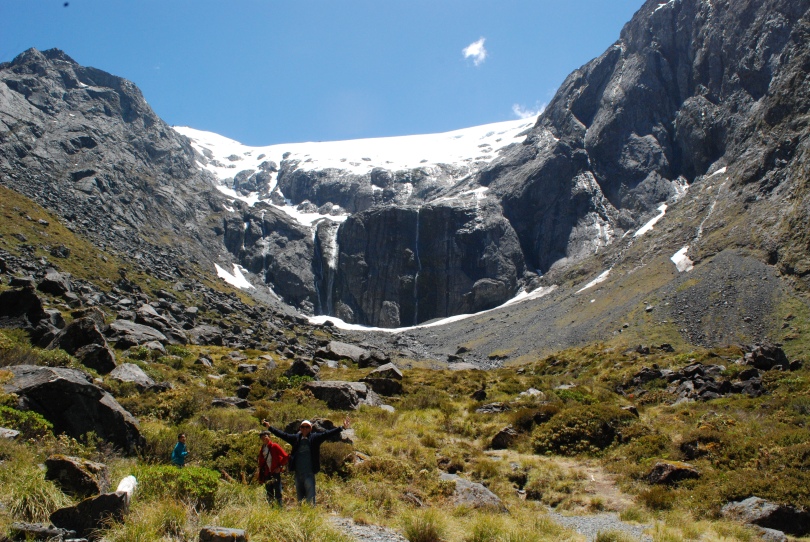 Can you see the boys in this picture? 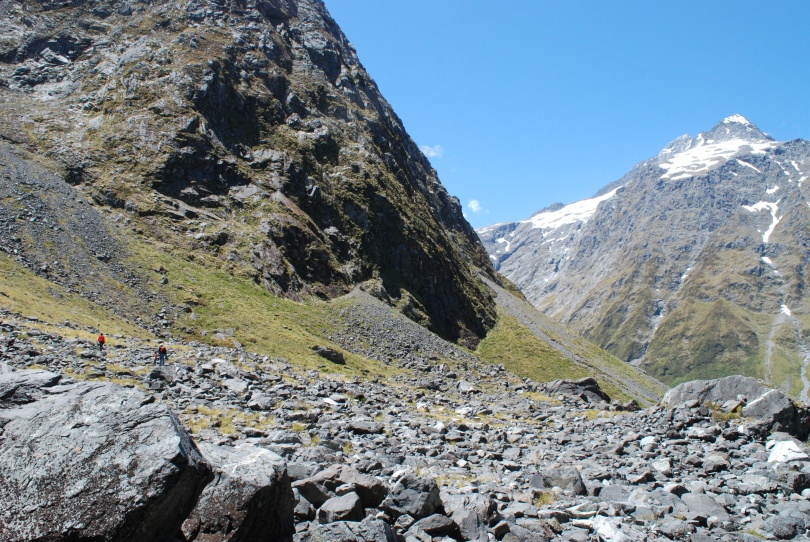 The track was quite difficult and the rocks were too big for Mum that she decided to sit down at one point and just waited for the boys to return from tramping.

Just after a few minutes of bus-ride, we made a quick stop at Falls Creek. The water coming from the mountain was super clear and light blue (although not so obvious from this ), similar to the sky that day.

Next in our tour was nature walk around Lake Gunn. 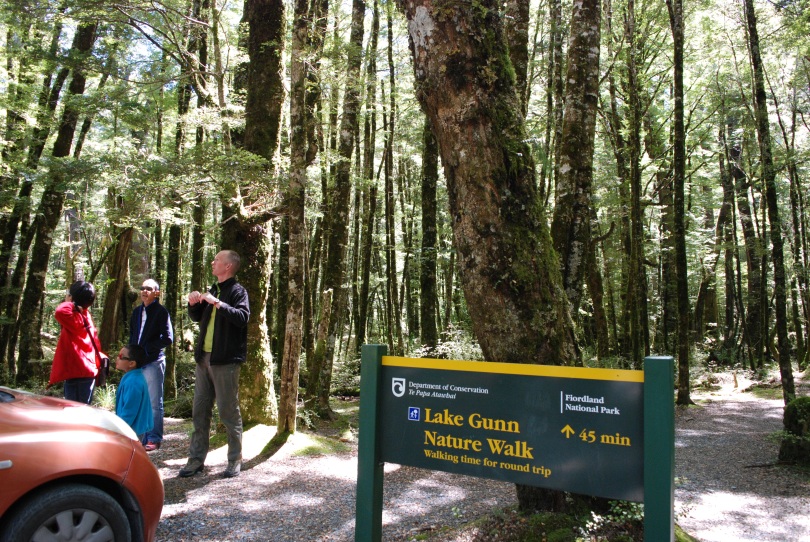 We enjoyed walking in the forest very much.  There were hundred-year-old trees, moss, ferns and chirping birds… 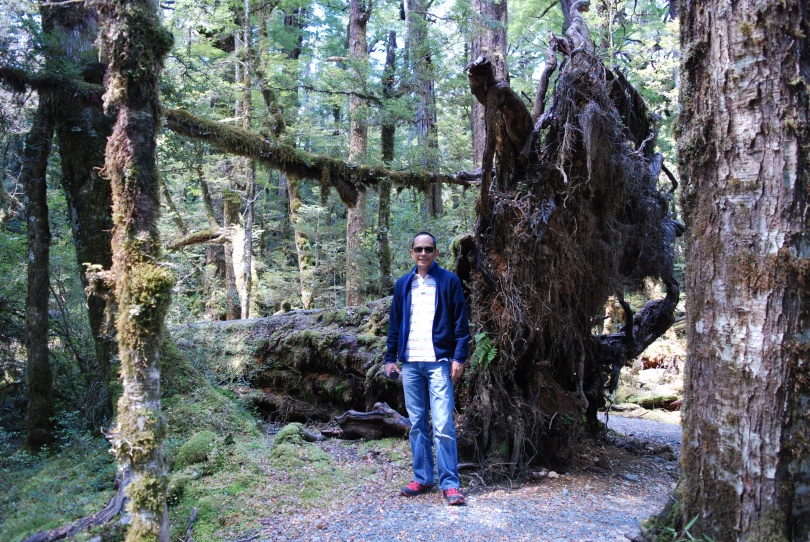 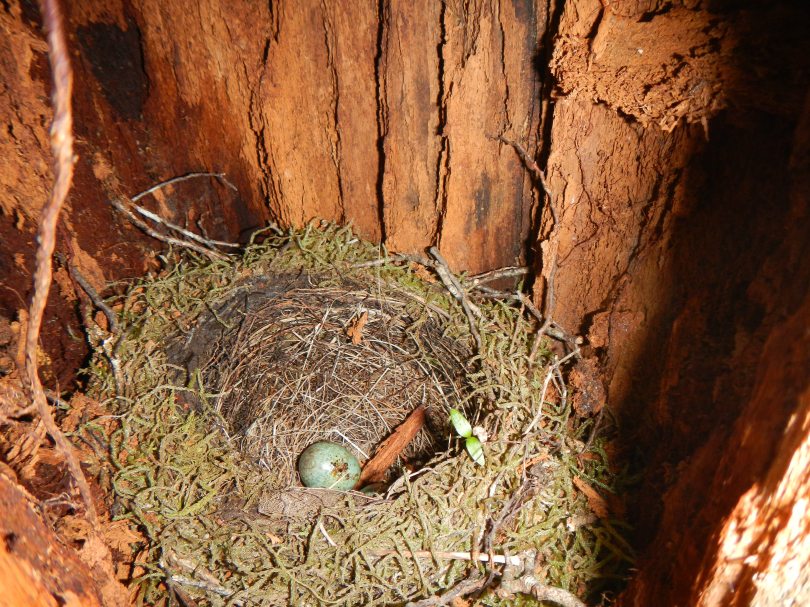 And then there was Lake Gunn, and the two boys who could not stop throwing stones in the water… 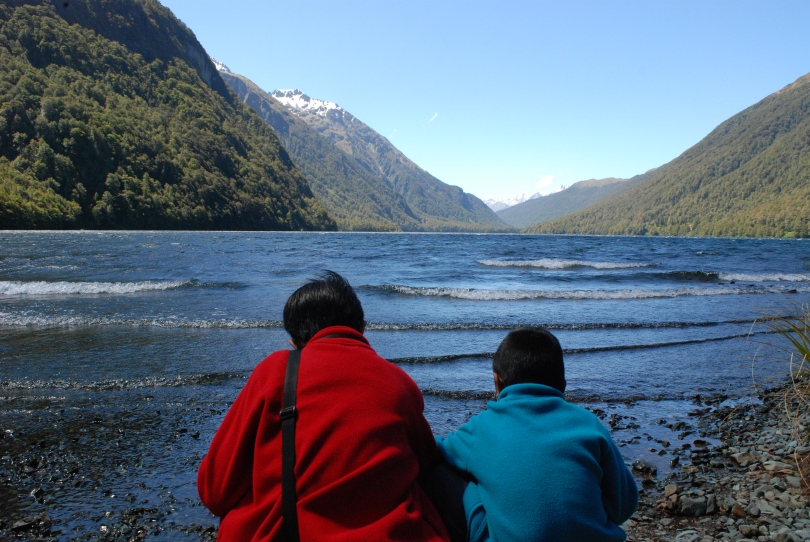 After our walk, a small picnic of hot chocolate and biscuits were waiting for us (thanks Trips&Tramps!)… 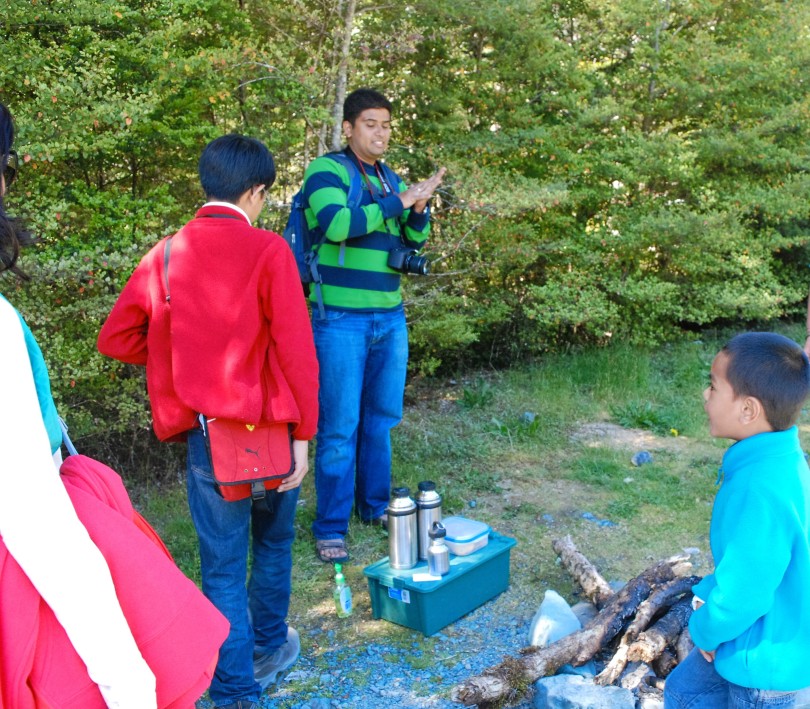 …beside this river lined with purple lupins. 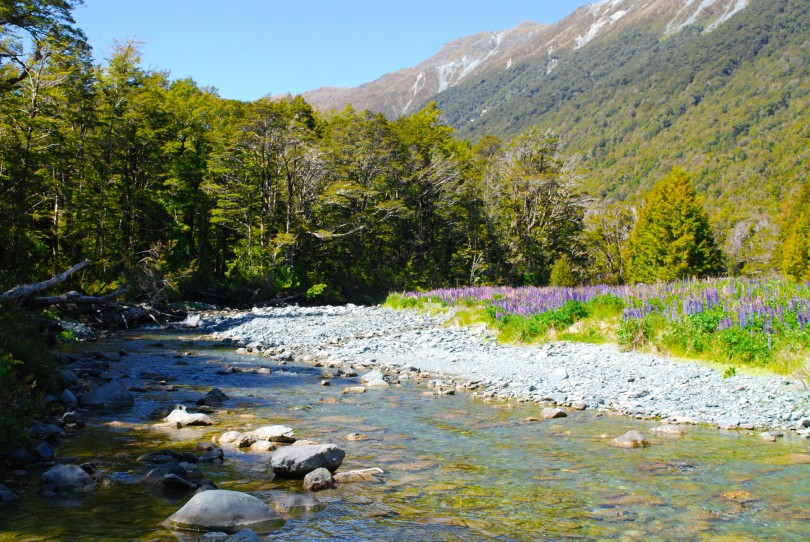 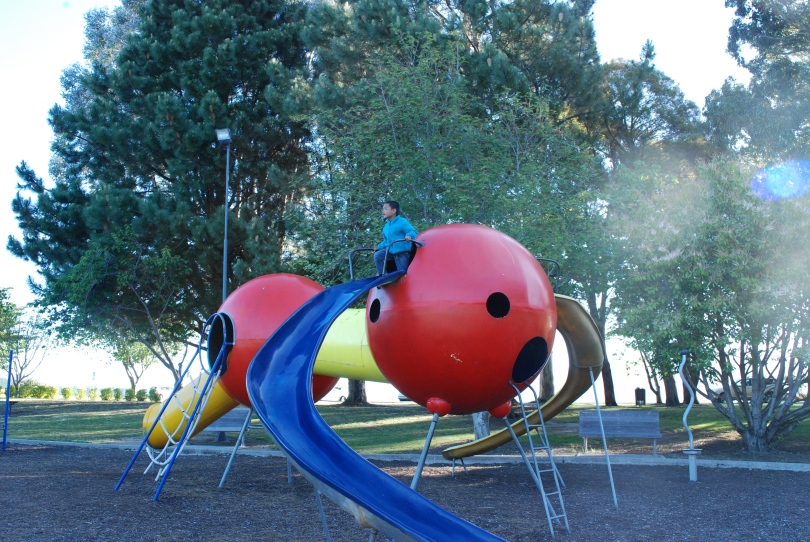 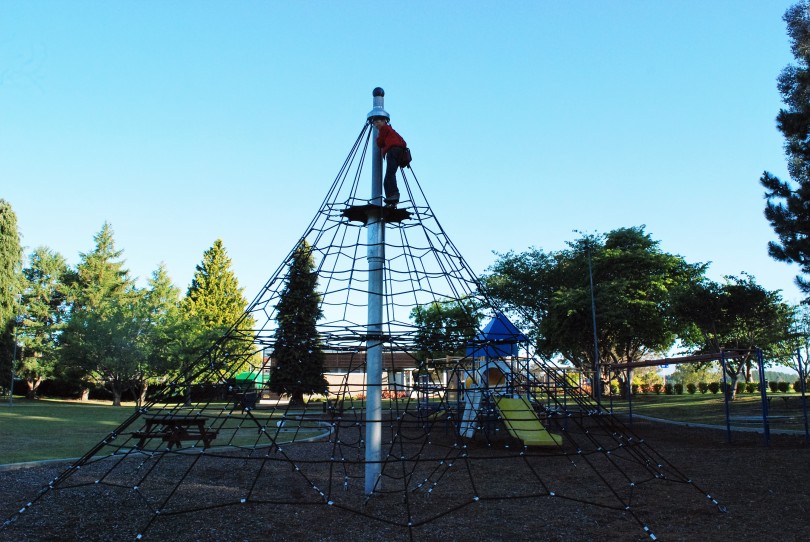 …and with tiramisu & strawberry pudding at Café La Dolce Vita… 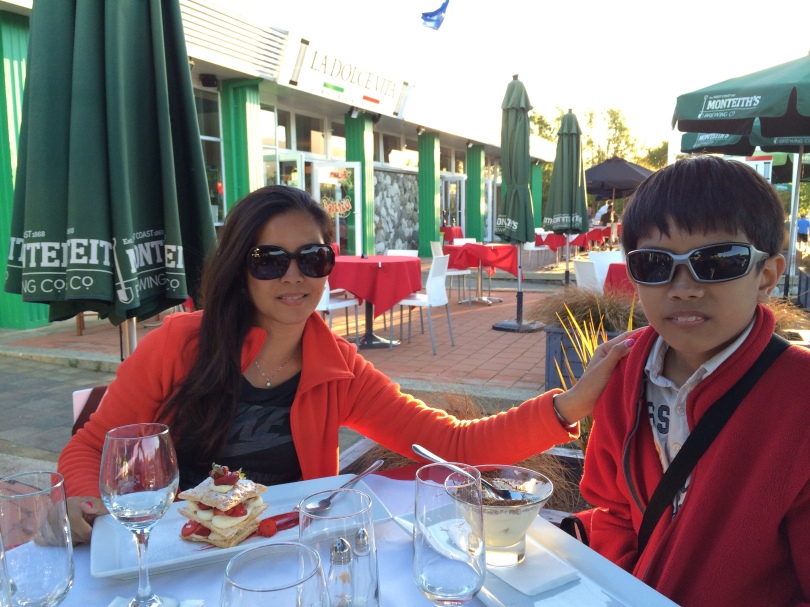 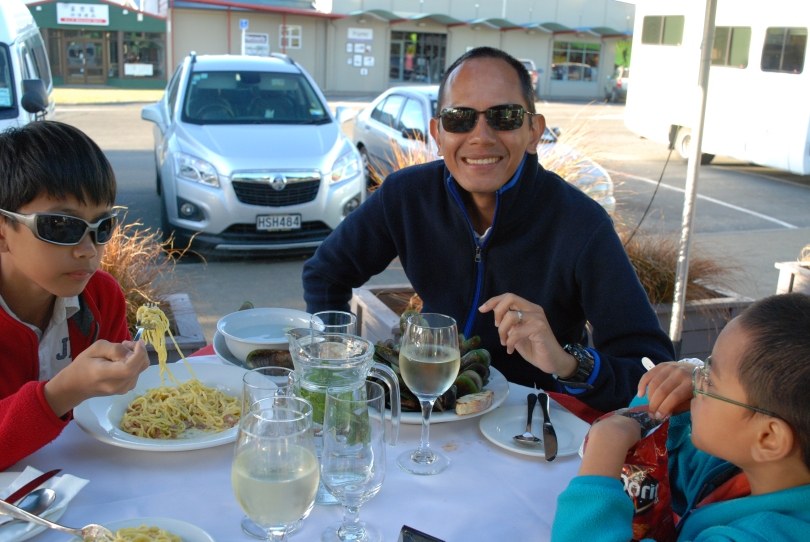 … and a lovely sunset over the mountains and lake of Te Anau. 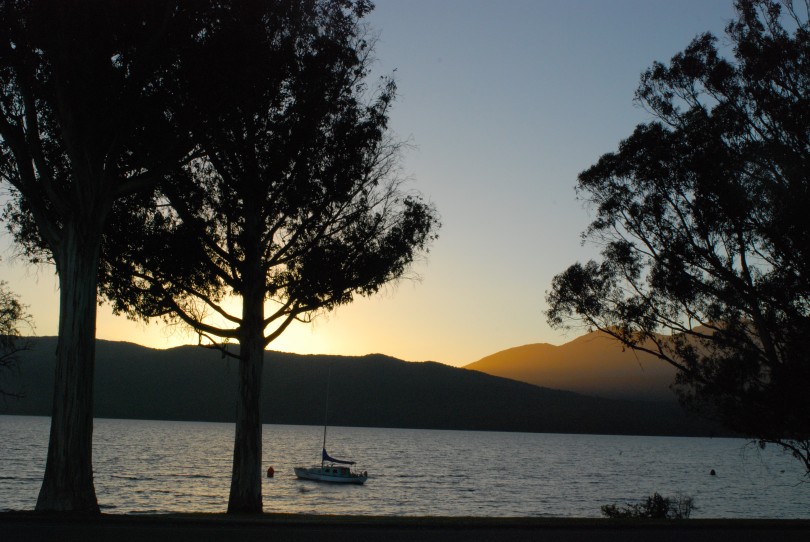